He shaved the beard, he wore a suit, he didn’t once address the crowd as “Nation.” He was Stephen Colbert, and he introduced himself as the future host of Late Show at CBS’s upfront presentation for advertisers in Carnegie Hall Wednesday.

Much of the talk around Colbert’s transition from The Colbert Report to taking over from David Letterman has focused on what kind of host he would be like as himself, having shed his fake-news persona. So, of course, that was the focus of the taped sketch Colbert opened with.

The piece opened on Colbert planning to go on a journey to India to discover himself, with a giant bag or gorp and a copy of Eat Pray Love. Until, that is, he became absorbed in a marathon binge-watch of CBS and lost track of time until May. Desperate, he told CBS president Les Moonves that he still didn’t know who he was. “You’re a white male comedian,” Moonves said, “with a nice haircut and a suit.”

Did Colbert’s appearance reveal what the true Colbert, CBS host, would be like? Maybe, maybe not. He followed the taped sketch by introducing himself onstage, a la the self-aggrandizing Report host: “Please welcome the new host of the Late Show and the man who is talking right now saying these words–Stephen Colbert!”

As for Colbert’s monologue, it was arch, snarky and–typically for upfronts–TV-centric. Colbert said he’d be a good fit for the CSI network because “most of my show will be me solving crimes by zooming in on pubic hairs.” As for his relationship with advertisers–whom CBS has already been having him schmooze–he promised to deliver. “Advertisers want young eyeballs,” he said, “and not just the ones Rupert Murdoch buys on the black market.”

Of course monologues themselves require a kind of persona; the reall differences between CBS Colbert and Comedy Central Colbert won’t be apparent until we see him doing interviews, sketches, banter and all the odds and ends that make up a late night. In the meantime, Colbert hardly seemed fazed by the big stage.

“I guess the old joke is true about how you get to Carnegie Hall,” Colbert said. “You take over a late show and it turns out to be mandatory.” 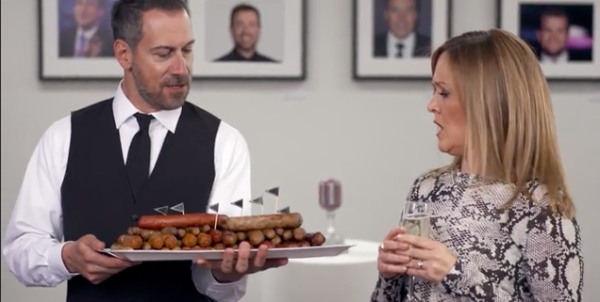