What It Was Like Growing Up With Food Insecurity

Growing up, food always felt just out of my reach. As an only child, I didn’t have to worry about older brothers or sisters stealing my snacks, and as a person living in an affluent area, I had multiple supermarkets and convenience stores within walking distance of my home. From a young age, I watched my grandmother in the kitchen, and I had the basic notions of how to prepare food: how to boil water, what to do if you burned yourself, how to clean dishes after your meal. The biggest food obstacle I faced growing up — and one which 15.8 million children in America also face — was tied to poverty.

Much of my childhood and adolescence was spent shifting between the care of my mother, who as a single parent also battled mental illness and drug addiction, and my grandmother, who lived on a limited income. Food insecurity was always an issue, particularly when I was in my mother’s care. For years, she did not receive government assistance to help with the cost of food, and was also unemployed. On the days where her her money was going to feeding us instead of feeding her addiction, we were still limited to things we could find at the dollar store: packets of ramen noodles, potato chips, and occasionally cans of soup.

Research shows that children growing up in poverty consume more potato chips, candy, fries, and soda than their wealthier counterparts. While there are, of course, multiple factors at play here, it’s not hard to understand the motivation behind these choices: when you’re poor, and especially when you’re a child, you want food that’s filling, flavorful (there’s much evidence of added salt, sugar, and fat manipulating taste buds), and easy to eat. When I was hungry, I did not know how to prepare healthy proteins like chicken or tofu. We didn’t have a blender or a juicer. But we did have a microwave for ready meals, and I did have two hands which could open a bag of chips in a matter of seconds.

There’s a lot of discussion concerning what poor people should eat. Food policing — that is, the notion that people are monitoring what I eat, how much I eat, and when I eat — is something I’ve been acutely aware of since I was a child. When I reached middle school, my mother and I became recipients of funds through the Supplemental Nutritional Assistance Program (more commonly known as “food stamps” or “EBT stamps”). Initially, this offered me an immense sense of relief. I started making lunches at home — usually a peanut butter sandwich and a plastic bag full of carrot sticks. On weeks where we had a little extra money, I’d go to the store and buy boxes of miniature fudge brownies and cookies as desserts.

From a very young age, I understood food as a reward to be earned: if you spend money on things that are not food, you do not get food. If you do not pack a lunch, you do not eat. And if you’re crying in the bathroom because your stomach hurts and your head hurts and your feelings are hurt because none of your friends will share their snack with you, you’re still expected to go back to your classroom and behave.

Of course, growing up, I was ignorant to a lot of outside factors. I didn’t fully understand that my situation was an abnormal one and thought my thought process was unhealthy. When I fell asleep during math, I thought it was because I was bored. When I was lethargic and easily out of breath at recess, I was told I needed to go to bed earlier. When I handed in homework with missing answers, I was told I needed better focus. I was never told that poor children have smaller brains than their wealthy counterparts, and that the minimized functions affect memory, language, special skills, and reasoning. I was too ashamed to tell teachers and classmates I wasn’t bored, or lazy, or staying up too late watching television — I was hungry.

The sensation of feeling shame for experiencing hunger as a poor person is an acute one, but the intersection of the shame in feeling hunger as both a poor person and as a woman is something I ruminate over often, and years later, I am still dissecting my feelings.

As I became a teenager, I became progressively more aware of the eating habits of my peers. In the cafeteria, friends began restricting food and manipulating their food intake. Bagged lunches went into the trash because they didn’t want to eat that in front of their new boyfriend — it was too messy, or it smelled too bad, or the portion their parent packed was too large. Instead, they nibbled on their boyfriend’s fries and sipped diet coke. In middle and high school, I was a recipient of free lunches through the National School Lunch Program, which, in my case, meant I was guaranteed a meal prepared for me that was (at least relatively) nutritionally sound. I didn’t have to buy it at the dollar store, I didn’t have to prepare it myself, and I didn’t have to portion it out to last more than one meal. I was so grateful for it.

But, as my friends started eating less and less, I got comments on how I should eat less, too. First it was that I shouldn’t get the fries because it would tempt them. Then, it was that boys like girls who eat salads, so maybe I should get that instead of the burger. Then it was, well, if you have to get the fries, can we all have some, too? I didn’t argue, because I was young and insecure and wanted to be liked. I was also too embarrassed to tell them that I was so damn hungry and that my size zero pants were already too loose and I just needed to eat.

At first, I admired these girls for their self-control, and I read their disordered habits as social graces. How smart of them to realize, I thought, how in tune they are to food etiquette. On afternoons I took the bus home with them, I watched them open refrigerators full of food I only dreamed of — the stuff of sandwiches, pastas, fresh produce. “I’m starving,” they’d say, and we’d binge on pizza and snack on chips and finish with sundaes piled high with toppings: when I went home after those nights, I’d dream of whipped cream, sprinkles, and hot fudge, and wish I lived my friend’s lives. Though I did not realize it at the time, this was my first introduction to the phenomena of “liar-exia” and the pressure for women to hide their appetites in order to appear more feminine and dainty.

At first, I too felt glamorous and smart. But when I went to my own home after those days of skipped lunches, I opened my cabinets and saw nothing: bottles of mustard, stale pastas, and boxes of clear broth. I began to simultaneously resent my friends and resent myself — on days I skipped lunch and went home to my mother’s apartment, I consumed less and less, and began to see myself as a victor. My mind was foggy, my schoolwork was on the decline, and my energy level was pitiful. But I was getting thinner, I was sitting at the cool table sipping diet coke, and I was worthy.

This sense of worth, for me, is tied deeply to the notion that poor people do not deserve food. Many nights I spent in bed, clutching my stomach and praying my headache away, I told myself that I was doing the right thing, not just for myself, but for my country. I’m not wasting taxpayers’ dollars, I reassured myself, as I refused to recognize that instead, I was wasting away myself.

The guilt associated with receiving public benefits in order to access food is one rarely covered in the media, and I think it’s tied closely to the dehumanization of the poor in our country. We see poor people as caricatures, and only when they are barefoot and in rags do we see them deserving soup and bread.

My classmates never knew how poor I was, how precious to me their tossed lunches would have been, and I think that’s another layer of guilt and shame: I was a dishonest version of myself, and my interpersonal relationships felt contrived and performed. When my friends praised me for my narrow waist and flat stomach, I was always torn between pride and agony: thinness was the reward, but hunger was the punishment. I was obsessed with food, with what was worthy of consumption, with what was worth the value of a taxpayer’s dollar.

I didn’t know that I shouldn’t have had those thoughts at 15, that I shouldn’t have had those thoughts ever, and I still feel pangs of sadness for the hungry little girl that I was, and the starving teenager and young woman I morphed into. As women, we are so susceptible to the media and our peers telling us to make ourselves smaller, to become make our skin closer to our bones, to become barren and weak. I didn’t know then that children begin dieting by the age of ten, that the media chronically influences women’s body image, and I didn’t realize how much shame related to both my body and poverty impacted my choices and my health. 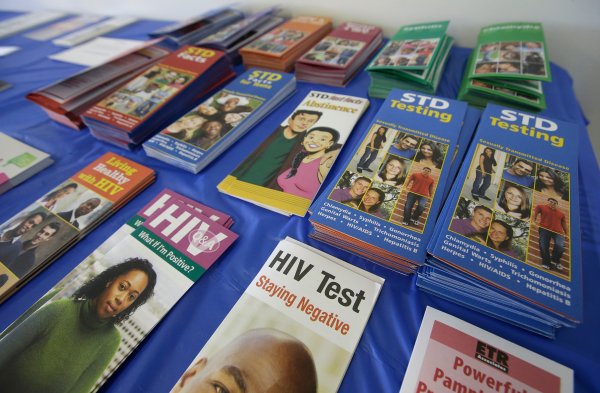 Doctor Treating HIV Epidemic in Indiana: Much Remains to Be Done
Next Up: Editor's Pick