Hear the Closing Songs From Mad Men in One Playlist

The first episode of Mad Men ends with Don Draper watching over his children while we hear “On The Street Where You Live,” a song from My Fair Lady about elusive love and the fantasy it provides. By the end of season six, Don is standing with his children in front of a house that looks nothing like that perfect suburbia. “This is where I grew up,” he says. Shortly afterward, we hear Judy Collins’ version of Joni Mitchell’s “Both Sides Now,” a song about coming to terms with reality.

The final song in an episode of Mad Men has come to be a hallmark of the show, serving as a thematic barometer for episode that preceded it. Vulture’s Margaret Lyons once wrote the music “serves as a punchy and sometimes twisted button on the episode.” Asked for his favorite “credits song” in a Reddit AMA, creator Matthew Weiner said: “Every song is there for a reason and some are more emotional to me than others. I write to music and I even had a file in my iTunes for years filled with songs that I hoped I would be able to use in my then non-existant TV show.”

With the show coming to an end this Sunday, there has already been speculation as to what musical note it will end on—and you can cast your vote in our poll now. But to better remember the last seven seasons, we’ve built a nearly comprehensive playlist of the songs that closed out Mad Men episodes. (Thanks to Basket of Kisses for their compilation of music from the show, Tune Find and other Internet obsessives.)

Among the songs missing: The Beatles’ “Tomorrow Never Knows,” which closes the season five episode “Lady Lazarus” and was pricey, according to the New York Times. The Beatles catalog is not on Spotify. In some cases, simply the specific version of a song used on Mad Men wasn’t available on Spotify, like Nellie McKay’s “Christmas Waltz,” which Weiner said “inspired the whole episode of that name.”

The songs on this playlist, however, should satisfy your need for Mad Men nostalgia. It is, after all, “delicate, but potent.” 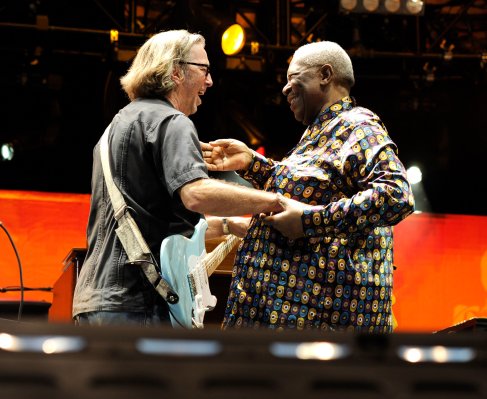 Watch Eric Clapton Thank B.B. King 'For All the Inspiration and Encouragement'
Next Up: Editor's Pick