Why We Accept 'Dad Bod' on Rich Men

Getty Images
Ideas
By Marina Adshade
Marina Adshade is a professor of economics at the Vancouver School of Economics a the University of British Columbia and the author of Dollars and Sex: How Economics Influences Sex and Love.

Thirty years ago, a high school friend of mine shared with me her sage advice for choosing sexual partners: Never sleep with a man who can fit into your jeans. My friend may not have been particularly discriminating in terms of whom she slept with, but she appears to have been well ahead of her time by indicating that what really matters is her partner’s relative, not absolute, size.

Much has been said about Clemson University student Mackenzie Pearson’s seemingly innocuous article in which she claims to identify a whole new relationship trend in which young women are into a certain type of man—those with a “Dad Bod”—because those guys won’t make them look bad when they have their picture taken on the beach.

I am going to be perfectly frank: While there is absolutely nothing wrong with the body type of a 45-year-old man, if I could be 19 again, I would not be “going nuts over this body type” on a 22-year-old. But from an economic perspective, maybe it’s smart for Pearson to look for a man who will never beat her in a who-has-the-better-body contest. Evidence collected by British psychologists in 2011 suggests this is exactly how women behave when they anticipate being married to a high-income man.

Historically, physical fitness was a strong indicator of how much potential a man had at generating income. Back when men earned their livelihood wielding a spear, a plough, or a fishing net, strong men came out on top of the distribution. Because of this, women who wanted the most for themselves, and for their children, sensibly passed on men who appeared better-suited to sitting next to the campfire all day with a rack of ribs in one hand and a mug of beer in the other.

To test this, researchers at the University of Central Lancashire created online dating profiles for 20 fictional men who varied in terms of physical attractiveness (rated independently on a scale of 1 to 10), and who were assigned an occupational class: high status (doctor, architect), medium status (teacher, social workers), and low status (postman, call-center operator). The dating profiles then were shown to women who were then asked which of the men they would prefer for a long-term relationship.

If college-educated women anticipate having a husband who has a high occupational status, then according to this research, they would prefer him to be less physically attractive.

The general conclusion, made by the authors of the study, is that a woman who is afraid that her mate will not be faithful will avoid men whom she believes will attract other women. This could be because she thinks they will cheat, but it could also be that mate-guarding is exhausting, and she would rather not incur the cost of being in a relationship with a man who is constantly being pursued by other women.

There is one other possibility, however, and that has to do with the distribution of household bargaining power. A women who is in a relationship with a man who has outside options in terms of other women, because he has a high income and is physically attractive, is unlikely to have much influence in decision making in her own family. If she cares about economic resources, physical attractiveness AND her own bargaining power, then it is completely rational to choose a man who is weaker in either one of those characteristics: attractiveness or income.

When I told my 22-year-old daughter (who, by the way, thinks this “new trend” is a complete myth) that I was writing this article, she said, “Oh my God, can’t everyone just give that poor girl a break!” And, of course, she’s right.

It is interesting, however, to think about how these young, college-educated women see their lives spread in front of them married to their doughboy husbands. Perhaps they are not just looking for a better cuddler, maybe they are looking for someone, they believe, will do his share of the housework. And for that, I can hardly blame them. 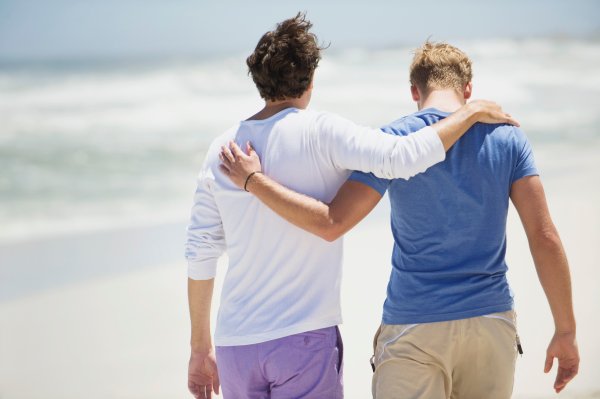 In Defense of Being Boring and Gay
Next Up: Editor's Pick