By Josh Sanburn and Rishi Iyengar

Five of the seven people killed aboard an Amtrak train that derailed north of Philadelphia Tuesday were identified Wednesday evening, with an AP employee, a CUNY dean and a U.S. Naval Academy midshipman among the victims.

A Senior Vice President at Wells Fargo and the CEO of Philadelphia-based education software company AppreNet were also confirmed dead in the crash.

The Associated Press reported that video software architect Jim Gaines, one of the news agency’s own employees, died in the accident.

Gaines—an award-winning software designer who had worked at the agency since 1998—was on his way from Washington, D.C. to his home in Plainsboro, N.J., according to the AP.

AP President and CEO Gary Pruitt sent employees an e-mail Wednesday describing Gaines as leaving behind a “legacy of professionalism and critical accomplishment, kindness and humor.

AppreNet chief executive Rachel Jacobs had been returning to her home in New York when she was killed in the derailment, her family confirmed on Wednesday. In a statement, the family said Jacobs was “a wonderful mother, sister, daughter, wife and friend,” and that they “cannot imagine life without her”.

Justin Zemser, a 20-year-old midshipman at the U.S. Naval Academy in Maryland, was on leave and heading home to Brooklyn on the ill-fated train. Zemsar was a sophomore at the academy and a wide receiver for its sprint football team, described as a “bright, talented and patriotic young man” by a New York City Council member he interned with.

“He was wonderful. Absolutely wonderful,” Zemser’s mother Susan told reporters outside her home. “Everybody looked up to my son and there are just no other words I could say.”

The fourth victim was identified as Wells Fargo executive Abid Gilani, whose death was confirmed by company spokeswoman Elise Wilkinson.

Officials at the City University of New York’s Medgar Evers College in Brooklyn confirmed late Wednesday that Derrick Griffiths, dean of student affairs at the institution, was also killed in the crash. Griffith, 42, served students and the community “with passion” and was a “champion for the downtrodden”, the college said in a statement. 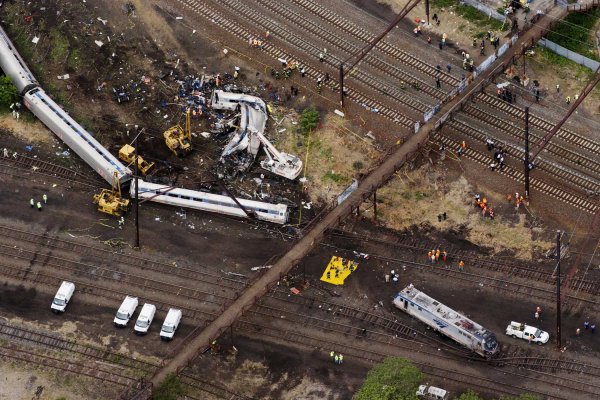 Amtrak Train That Derailed Was Speeding, NTSB Says
Next Up: Editor's Pick