Everything You Want to Know About the Bird Flu Outbreak

An egg-producing chicken farm run by Sunrise Farm is seen in Harris, Iowa on April 23, 2015. Iowa, the top U.S. egg-producing state, found a lethal strain of bird flu in millions of hens at an egg-laying facility on Monday, the worst case so far in a national outbreak that prompted Wisconsin to declare a state of emergency. The infected Iowa birds were being raised near the city of Harris by Sunrise Farms, an affiliate of Sonstegard Foods Company, the company said.
Joe Ahlquist—Reuters
By Alexandra Sifferlin

The United States is dealing with a nasty bird flu outbreak.

Sixteen states have reported cases of highly pathogenic H5 avian flu among flocks of birds like turkeys and chickens as well as wild birds since last December, resulting in the culling of at least 30 million birds. Recently, the disease was confirmed in a flock of 1.7 million chickens in Nebraska. Other states have also been hit hard, like Iowa, where more than 24 million birds from 39 different sites have been affected. On Wednesday, TIME asked the U.S. Department of Agriculture (USDA) a few questions regarding the recent outbreak.

How many strains of bird flu are circulating?
So far in this outbreak, the U.S. has seen highly pathogenic cases of H5N8 and H5N2 strains in domestic poultry. Those same strains as well as a H5N1 strain have been discovered in wild birds. According to the USDA, the H5N8 virus started in Asia and spread among wild bird migratory pathways in 2014, and has mixed with other bird flu strains in North America, which has resulted in what the USDA calls new “mixed origin” viruses. The H5N1 seen in North America is not the same virus that has been seen in Asia, Europe and Africa, which has caused human infections.

Are all these outbreaks connected?
Yes, the viruses are all linked. According to the USDA, since mid-December 2014, there have been several ongoing highly pathogenic avian influenza incidents along the Pacific, Central and Mississippi Flyways (routes used by migrating birds).

How does bird flu spread between states?
Among wild birds, outbreaks along flyways may explain some of the spread. But how it might be spreading from farms that are far away from one another is less understood at this time. The USDA says it’s currently conducting epidemiological investigations to understand how the virus is being introduced some of these other populations of birds. “Poultry operations have a very complex variety of inputs including air, feed, people, vehicles, birds, water and others,” the agency told TIME in an email. “Any of these might be the pathway of virus introduction on any single operation.”

Where does bird flu come from? Can someone be at fault?
As mentioned earlier, some of the viruses currently seen in the North American outbreaks originated in Asia and then spread to the U.S. and mixed with other viruses. It’s important to know there is a flu for birds just as there is for humans and, like people, some of these strains are worse or more severe than others. According to the USDA, native North American strains of bird flu occur naturally in wild birds and they can spread to domestic birds like poultry. Most often there are no signs a bird is infected. But in some cases, as with the current outbreak, the viruses are highly pathogenic. That means they kill chickens and turkeys quickly, and they spread fast. The USDA says there is no fault in an outbreak like this.

Why has this outbreak spread so much?
To date, the USDA says around 30 million birds have been culled (slaughtered) due to confirmed presence of the bird flu strains. Researchers are still conducting studies to learn how the virus is spreading to poultry operations, but the agency points out there have been other serious outbreaks in the past. For instance, in 1983 to 1984, 17 million chickens, turkeys and guinea fowl in Pennsylvania and Virginia were culled. In 2007, the presence of low pathogenic H5N2 avian influenza in West Virginia resulted in 25,600 poultry being culled. The high number of birds slaughtered during this outbreak is hard for farmers involved, but 30 million is still considered a small percentage of the overall U.S. poultry population. In 2014, according to the agency, the U.S. poultry industry produced 8.54 billion broilers, 99.8 billion eggs, and 238 million turkeys.

I can’t be infected, right?
Right. The virus strains involved in the current outbreak have never infected humans. The U.S. Centers for Disease Control and Prevention (CDC) says the risk to the general public is currently low. However, the possibility of human infections cannot be completely ruled out, as similar bird flu viruses have infected humans in the past. In an April news conference, Dr. Alicia Fry, a CDC influenza control expert, told reporters “it is possible that we may see human infections with the viruses associated with recent U.S. bird flu outbreaks. Most human infections with avian influenza viruses have occurred in people with direct or close and prolonged contact with infected birds.” Fry said the CDC is “cautiously optimistic” there will not be human cases, but they are already preparing for the possibility just in case.

So what can I do to make sure I am safe?
The recommendations for the general public are to avoid wild birds and stay at a distance. The CDC says people should avoid contact with domestic birds or poultry that appear ill or have died, as well as surfaces that may have been contaminated with wild or domestic bird feces. People who do have contact with infected birds should monitor themselves for flu-like symptoms and some may even be given preventative antiviral drugs.

How can I tell if a bird is infected?
What has been observed is that turkeys will stop eating or drinking and then, sometimes only within a few hours, they will start to appear lethargic. The birds may look as though they are stargazing, the USDA says, or twisting their neck. Death happens pretty quickly after that. In chickens, they may start laying fewer eggs and stop eating. They can also look lethargic before they die.

Is there a vaccine?
There is currently a vaccine under development for emergency use in poultry, but it’s still too early for use. The CDC is also creating candidate vaccine viruses that could be used to make a vaccine for humans if one were needed. But this is a routine precaution. 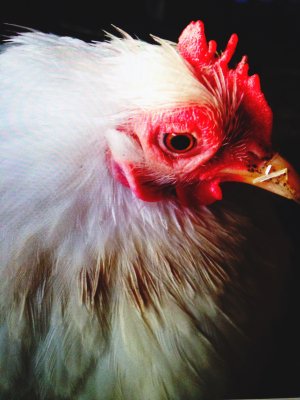 Bird-Flu Outbreak Spreads to Nebraska
Next Up: Editor's Pick