Rescue workers climb into the wreckage of a derailed Amtrak train to search for victims in Philadelphia on May 12, 2015.
Bryan Woolston—Reuters
By Justin Worland

Survivors of Tuesday’s deadly Amtrak crash described a chaotic scene, with people and possessions hurled into the air as the train derailed outside of Philadelphia.

“The next thing you know, the train starts doing funny things, and it gradually starts getting worse and worse,” crash survivor Jeremy Wladis said on CNN. “Things started flying… Cell phones were flying, laptops were flying. These two women were catapulted into the luggage rack.”

Wladis, who was seated toward the rear of the train, emerged following the crash and could immediately tell that cars near the front were in worse shape. He helped others evacuate, including an elderly blind man. “It was just complete chaos,” he told CNN.

Max Helfman, 19, of Watchung, N.J., said he grabbed his mother to keep her from falling.

“People were thrown to the ground,” Helfman told NBC Philadelphia. “Chairs inside the train became unscrewed and suitcases were falling on people. My mother flew into me and I literally had to catch her. People were bleeding from their head. It was awful.”

Beth Davidz, another passenger, said she was lucky to have left the second car, typically the “quiet car,” to take a phone call when the crash occurred. The second car appeared to be the most damaged from footage that emerged following the crash. “As soon as we were on the top, you see those first two cars, you kind of knew there was going to be a death toll just looking at it,” she told CNN of the moment she evacuated the train.

Other survivors, who documented the crash on Twitter, described tragedy and heroism at the site. 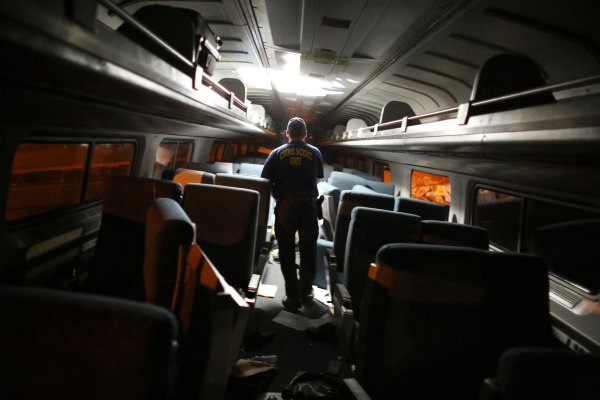 Tweet About Violin Lost in Amtrak Crash Sparks Outrage
Next Up: Editor's Pick