How the Amtrak Derailment Is Affecting East Coast Travel

The derailment of an Amtrak train late Tuesday in Philadelphia left at least six people dead and created chaos on the heavily traveled Northeast corridor Wednesday morning, cutting off all direct rail service between Philadelphia and New York City and causing delays elsewhere.

All Amtrak travel between New York City and Philadelphia has been canceled until further notice. Passengers can travel with their Amtrak tickets on New Jersey Transit’s service between New York City and Trenton, N.J., which is located about 40 mi (64 km) from Philadelphia. But trains are not available between Trenton and Philadelphia, because Southeastern Pennsylvania Transit Authority (SEPTA) has suspended rail service on that line. Additionally, New Jersey Transit’s service to Atlantic City from Philadelphia has also been suspended.

For passengers traveling elsewhere on the Northeast corridor, Amtrak is operating a modified schedule. Service continues between Washington, D.C. and Philadelphia, and New York City and Boston, but passengers should check with Amtrak to confirm their train is still running. As of early Wednesday morning, only three trains appeared to be running as scheduled between Washington and Philadelphia. A dozen were canceled and many more were listed as “status currently unavailable,” according to Amtrak’s website. The Boston-to-New York City route appeared to have a similar number of trains operating.

Amtrak has offered no indication of when regular service would be restored. 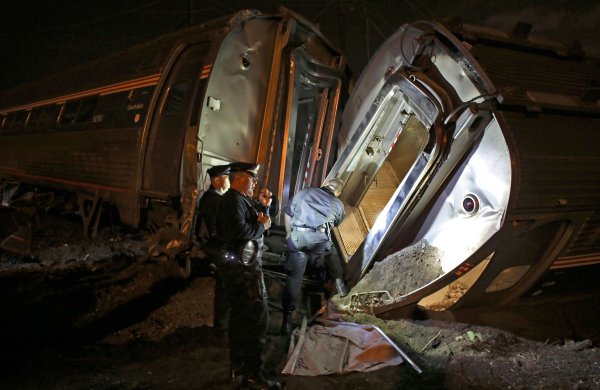 See Photos of the Amtrak Train Crash in Philadelphia
Next Up: Editor's Pick