In this photo illustration the smart phone taxi app 'Uber' shows how to select a pick up location at Cibeles Square on October 14, 2014 in Madrid, Spain.
Pablo Blazquez Dominguez—Getty Images
By Naina Bajekal

American taxi service Uber has already taken over the roads in hundreds of cities around the world, but this week it is preparing to conquer the skies as well. Uber is launching a helicopter taxi to shuttle clients from the Nice airport in the south of France to the Cannes Film Festival starting Wednesday.

More than 200,000 people usually go to Cannes for the international film festival in May. The journey from the nearest airport in Nice to the festival can take one hour when traffic is bad and Uber expects many of the A-list movie stars and directors attending the festival to opt for a 7-minute helicopter ride instead.

Uber has partnered with French helicopter firm Helipass to launch the service, which would cost about €160 ($180) for up to four people. The price includes a chauffeured car ride from the airport to the heliport, as well as a limo at the other end to take passengers to the center of Cannes.

Last year Uber offered a private jet service between Paris and Nice during the Cannes Film Festival, but charged nearly $9,000 per plane, which flew up to four passengers.

During the festival (running May 13 to May 24), attendees can summon one of seven helicopters using the Uber app on their smartphones. This is the first time the UberChopper service is being made available in France, although the company has experimented with it earlier in Lisbon and at the Coachella festival. 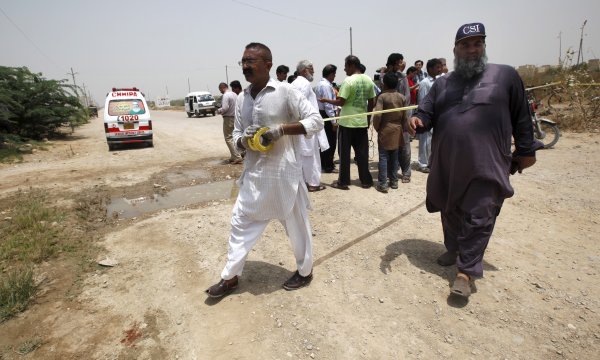 43 Dead in Pakistan Bus Attack
Next Up: Editor's Pick