Why China and India Just Can't Get Along

In the 7th century, a Chinese monk traversed a ribbon of the Silk Road, through the forbidding Taklamakan desert and over the mighty Tianshan peaks, to India. The Buddhist cleric’s name was Xuanzang, and he spent 17 years abroad before returning home with a cache of sutras and religious relics.

On Thursday, Narendra Modi will make his first visit to China as Prime Minister of India. One of his first stops will be the Wild Goose Pagoda in the central Chinese city of Xi’an, which, legend has it, was originally built to store Xuanzang’s Buddhist treasures from India. With China’s President Xi Jinping at his side — a rare instance in which a Chinese leader will greet a foreign leader outside of Beijing — Modi is expected to pay respects to one of the first devotees of globalization. It’s no small irony that an ancient Buddhist pilgrim will bring together a Hindu nationalist and a Communist princeling.

Yet for all the feting of Xuanzang, India and China’s relations remain tenuous. The world’s two most populous nations comprise more than one-third of humanity. Yet bilateral trade hovers around $70 billion, less than half the dollar figure of commercial ties between China and Australia. Memories of border battles — the most recent in 1962 — fester, and the 4,000-km frontier, which cuts through disputed territory, remains tense. “The bilateral relationship cannot be very good unless the border dispute is solved,” says Zhao Gancheng, a South Asia expert from the Shanghai Institute for International Studies.

Imagine: there is not a single direct flight between two of Asia’s financial capitals, Shanghai and Mumbai. Between Beijing and New Delhi, nonstop flights only run three times a week. In 2013, 175,000 Chinese went on holiday in India, according to the Indian Ministry of Tourism. Thailand, meanwhile, attracted 4.6 million Chinese visitors last year.

Ahead of his China trip, Modi joined Weibo, the Chinese social-media service that has flourished partly because Twitter is blocked by Chinese censors. Modi may be a Twitter rock star, with 12.2 million followers, but he has attracted fewer than 50,000 fans on Weibo. By comparison, Apple CEO Tim Cook garnered 300,000 Weibo acolytes within 3½ hours of joining the Chinese microblogging network this week. Modi’s Weibo feed was seized upon by Chinese nationalists who demanded that India return “South Tibet,” as they refer to the Indian state of Arunachal Pradesh. “South Tibet belongs to China,” went one comment. “Give it back to us. Otherwise we will take it back by force sooner or later.”

Such incendiary rhetoric notwithstanding, Modi spoke on the eve of his China trip of resetting the Sino-Indian relationship, focusing on economic pragmatism over troublesome politics. “I look forward to working out a road map for qualitatively upgrading our economic relations and seek greater Chinese participation in India’s economic growth,” he told Chinese media in New Delhi, “especially in transforming India’s manufacturing sector and infrastructure.”

MORE: Exclusive Interview With Narendra Modi: ‘We Are Natural Allies’

Still, the stumbling blocks are hard to budge. China’s historic friendship with Pakistan hasn’t helped, nor has India’s decades-long hosting of the Dalai Lama, the exiled Tibetan spiritual leader whose political counterpart Modi invited to his inauguration last year. Asked to comment on Sino-Indian ties, several India experts from leading Chinese universities refused to talk to TIME, citing the sensitivity of the bilateral relationship.

The Global Times, a daily affiliated with the Chinese Communist Party, published an editorial on Monday accusing Modi of “playing little tricks over border disputes and security issues, hoping to boost his domestic prestige while increasing his leverage in negotiations with China.” The editorial, written by an academic at the Institute of International Relations at the Shanghai Academy of Social Sciences, went on to criticize the “Indian elites’ blind arrogance and confidence in their democracy,” as well as “the inferiority of [India’s] ordinary people.”

When Xi visited India last September, the trip was hailed as groundbreaking — the first time a Chinese President had stepped on Indian soil in eight years. Yet Xi’s visit resulted in an underwhelming $20 billion in promised Chinese investment over a five-year period. By contrast, Xi vowed $46 billion in infrastructure spending for ally Pakistan during a trip there last month. (India’s trade deficit with China reached $45 billion last year.) The bonhomie of Xi’s India trip was also marred by a strategic joust by the Chinese People’s Liberation Army, which reportedly dispatched hundreds of soldiers past the Line of Actual Control to a remote section of the India-China frontier.

Fourteen centuries ago, Xuanzang so impressed his countrymen that his travels inspired one of the most treasured classics in the Chinese literary canon, Journey to the West. Later during Modi’s China tour, in Shanghai, the Indian PM is slated to preside over the signing of a movie project celebrating Xuanzang’s life that will be jointly made by Chinese and Indian film studios.

But it’s also worth remembering that Xuanzang’s journey west was forbidden by the Chinese Emperor, who was battling Turkic nomads on the Middle Kingdom’s periphery and had therefore banned most Chinese from venturing abroad. By the time Xuanzang returned to China, his spiritual exploits trumped any imperial embargo. Still, even China’s most celebrated pilgrim was, for a time, an outlaw for visiting India. 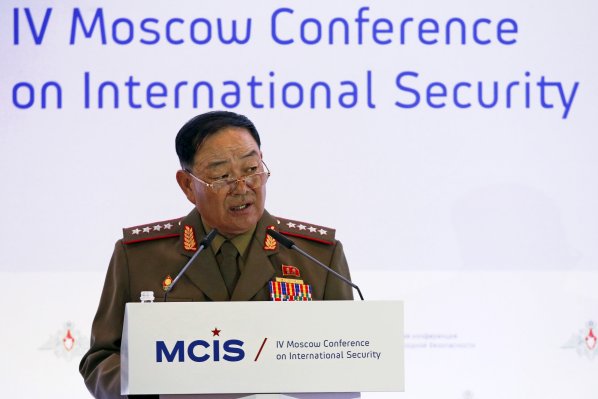 North Korea Executes Defense Minister for Dozing Off
Next Up: Editor's Pick