Before the fall: An unpiloted Progress spacecraft prepares to plunge into the atmosphere
NASA
By Jeffrey Kluger

Think you hate it when you miss a flight? Tell that to Terry Virts, Samantha Cristoforetti and Anton Shkaplerov. Since November, all three have had confirmed return seats booked aboard the same Soyuz spacecraft that carried them to the International Space Station (ISS) and has remained docked there ever since. They were set to come home this month, after a long half-year in orbit.

But scheduling is a tricky thing in the space flight business, especially when it comes to the ISS which, like any busy travel hub, must juggle a lot of incoming and outgoing vehicles. Some carry crew, some carry cargo—and all carry a high risk that something can go wrong. Something did go wrong in late April, when an unmanned Russian supply ship, the Progress 59, carrying 2.6 tons of goods—including oxygen, water, propellant, clothing, spare parts and spacewalk hardware—spun out of control after reaching orbit. That made it impossible for the ship to dock with the ISS, and a few days later, the Russian and American space agencies agreed the cause was lost. On May 7, all 24 ft. (7 m) and 21,000 lbs. (9,500 kg) of spacecraft and cargo tumbled back into the atmosphere and incinerated.

That had knock-on effects. Virts, Cristoforetti and Shkaplerov, the crew for what’s known as Expedition 42, were to leave behind the newly arrived Expedition 43—Gennady Padalka and year-in-space marathoners Scott Kelly and Mikhail Kornienko—and be replaced by the three person Expedition 44 crew before the end of the month. But a new crew requires a freshly provisioned station, and sending Expedition 42 home on schedule would have left ISS short-handed for too long before a new Progress ship could be readied for launch.

MORE: Watch The Trailer For TIME’s Unprecedented New Series: A Year In Space

“The ISS partners prefer to keep crew handovers, or the time when only three crew are onboard, short so we can maximize the important science and research we’re conducting on the orbiting laboratory,” NASA spokeswoman Stephanie Schierholz said in an e-mail to TIME.

The plan now is for Virts, Cristoforetti and Shkaplerov to wait at least until early June to come home. A new Progress will follow in early July and the Expedition 44 crew will launch in late July.

That, however, depends on the Progress line of spacecraft being declared fit to fly, and the language of NASA’s press release raised some red flags, hinting, perhaps inadvertently, that there might be something more troubling going on than just a one-off malfunction in a single ship. “The partner agencies agreed to adjust the schedule after hearing the Russian Federal Space Agency’s (Roscosmos) preliminary findings on the recent loss of the Progress,” the release said, without saying just what Roscosmos had revealed. More information, NASA said, would not be forthcoming until May 22. Neither NASA nor Roscosmos have responded to an e-mail from TIME requesting clarification.

None of this represents anything like an emergency. The station is fully supplied with essentials that can last at least until the fall, and there is no shortage of work to keep all six crewmembers busy while Virts, Cristoforetti and Shkaplerov await their lift home.

This past week, Virts and Kelly completed upgrades on the station’s carbon dioxide scrubbers—the system that removes waste gas from the cabin atmosphere and keeps it breathable. They have also been working with Cristoforetti to stow scientific samples and other equipment aboard SpaceX’s Dragon cargo craft, which arrived at the station on April 17 with 4,300 lbs (1,950 kg) of food and supplies and will undock and come home on May 21. Unlike Progress vehicles, which are designed to burn up on reentry, Dragons splash down intact, making them suitable for two-way cargo (and eventually crew) runs.

If Virts, Cristoforetti and Shkaplerov are disappointed at the postponed homecoming—and how could they not be when it’s been six months since they’ve eaten a steak, tasted a beer or felt anything other than a fan-driven, climate-controlled breeze on their faces—they wouldn’t let on publicly. That’s not in the nature of ISS crews who sign on for long hauls with always-conditional return dates.

They might also spare a thought for crewmates Kelly and Kornienko. When the two of them—who have been on board since March 29—reach the six-month mark in their mission, they’ll still have another whole six to go. It’s not just on Earth that no matter how sorry you feel for yourself, there’s always someone who’s got things a little harder. 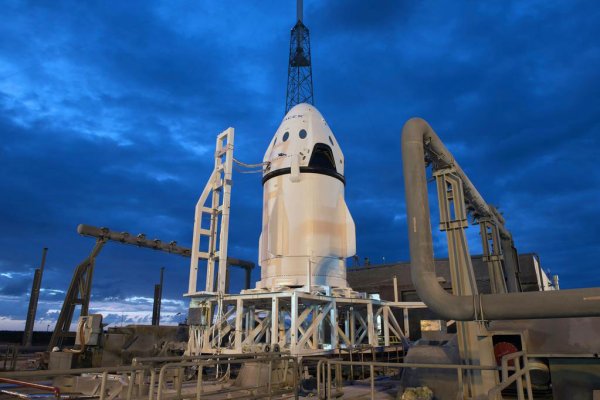