Why Nepal Is Still Being Hit by Earthquakes

Nepalese military personnel remove debris in search of survivors after a fresh 7.3 earthquake struck, in Kathmandu on May 12, 2015.
Athit Perawongmetha—Reuters
By Naina Bajekal

A second major earthquake struck eastern Nepal on Tuesday, less than three weeks after the country was devastated by a quake on April 25 that claimed over 8,000 lives. According to the U.S. Geological Survey, Tuesday’s quake measured 7.3 on the Moment Magnitude Scale, which succeeded the Richter scale in the 1970s, and struck 50 miles east of the capital Kathmandu, close to Mount Everest. Tremors were felt in several Indian states, Bangladesh and China.

At least 42 people have been killed in and more than 1,000 others have been injured. Here’s why Nepal has been struck again and what to expect next.

What is an aftershock?

Aftershocks look and act exactly the same as earthquakes, except that they are smaller than the mainshock and defined in their relation to the main event. The only difference is that an aftershock occurs in the same basic location, within an ‘aftershock zone’ and should occur before the rate of seismic activity returns to its pre-mainshock level.

Is Tuesday’s Nepal earthquake an aftershock?

Some aftershocks can occur on nearby faults outside the normal ‘aftershock zone’, but Tuesday’s quake could be seen as separate quake. Whereas the April quake’s epicenter was west of Kathmandu, the May 12 one struck east of the capital, near the Chinese border.

Tuesday’s quake has also sparked off another round of seismic jolts in its wake. Just 30 minutes after the 7.3 quake, an aftershock of 6.3 magnitude hit. There have been another five major aftershocks of magnitude 5.0 or higher.

So are the two unrelated?

There is evidence to suggest that earthquakes can trigger other earthquakes, even outside of their ‘aftershock zones.’ Nepal sits on a continental collision zone between the Indian Plate and the Eurasian Plate and the stress changes caused by the first April quake likely triggered the second earthquake on Tuesday. In fact, the U.S. Geological Survey (USGS) forecast an aftershock in that general area: its modelling suggested a 0.5% chance of a quake between 7 and 7.8 on the scale occurring this week.

Have there been lots of aftershocks since the Nepal quake on April 25?

A steady stream of aftershocks rattled Nepal in the aftermath of the April quake, initially at 15-20 minute intervals. One day after the quake, a shock of magnitude 6.7 struck the same region, causing fresh avalanches on Mount Everest, a landslide on a major highway and was felt in several parts of northern India. By May 1, more than 100 aftershocks with more than a 4.0 magnitude had occurred.

Will there be more to come after Tuesday’s earthquake?

Yes, in general, the greater the size of the earthquake, the higher the number of aftershocks. With any major earthquake, there will always be aftershocks. These can continue for weeks, months and even years. They tend to decrease in number but it’s very difficult to say when or where they’ll happen.

Could the next aftershock be worse? 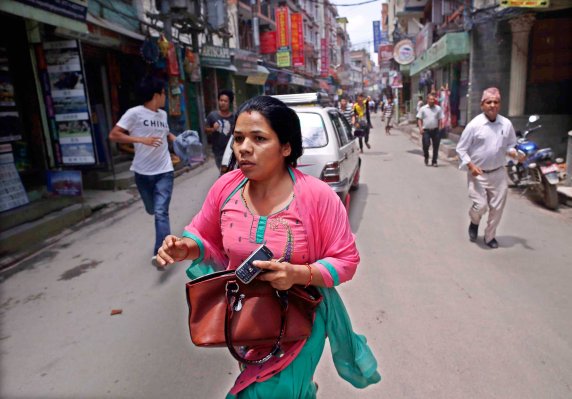 Scenes From the Aftermath of Another Massive Quake in Nepal
Next Up: Editor's Pick