Why the Tom Brady Suspension Is Ridiculous

Tom Brady and his people haven’t exactly carried themselves with aplomb during this whole Deflategate episode. Earlier this year, in a pre-Super Bowl news conference, Brady tried to deflect the seriousness of New England’s alleged air pressure tampering during January’s AFC title game by bringing terrorists into the conversation. That’s never a good idea. (“This isn’t ISIS,” Brady said. “You know, no one’s dying.”) Brady refused to hand over any text or email records during attorney Ted Wells’ investigation, even though Wells was prepared to let Brady’s lawyer control the production of such records—a layup for the defense if there ever was one.

Also, it sure seems like Brady sold out a powerless locker room lackey when he told investigators that he did not even know the identity of Jim McNally, the man accused of carrying out the deflation deed. And Brady’s agent called the flaws of Wells report, which concluded that the Pats star was likely “generally aware” of the deflation scheme, “tragic.” Again, never a good idea introducing such a word into a discussion on psi.

So it’s tempting to cheer the comeuppance of Tom Brady, the all-too-perfect quarterback of the NFL’s most villainous team. The NFL suspended him Monday, without pay, for four regular season games, while fining the Pats a million bucks and taking away the team’s first-round draft pick in 2016, and fourth-rounder in 2017. But please resist cheering the NFL’s sentence. Because it’s ridiculous.

For what it’s worth, I’m not from Boston, and not a Pats fan. But while you and I may bet that Brady did at least tacitly sign off on puncturing the footballs, the evidence in the Wells report directly trying Brady to Deflategate is thin. Wells largely bases his conclusion on the fact that Brady made a bunch of phone calls to equipment assistant John Jastremski after the controversy went public; Brady had not called the guy in the prior six months. Were they getting their stories straight? Maybe. But is it plausible that Brady was just insanely curious to find out what Jastremski knew, given the story was spiraling out of control, and many people were labeling Brady a cheat? Totally.

Bottom line: this penalty is convenient for the NFL. So what if Roger Goodell peeves off Pats fans, and even Brady? If he had let Brady off easy, on the other hand, he’d have to hear howls from other team owners, the press and millions of fans across the country that he was just protecting Pats owner Robert Kraft—Goodell’s most visible defender during the Ray Rice mess—and the NFL’s biggest star.

Instead, he gets to be the tough guy. He’ll even stand up to Tom Brady, darnit, and teach him a lesson. It’s actually pretty easy to pick on the cool kid. You don’t come across as a bully. (Brady’s agent said Monday evening he will appeal the penalty.)

“Your actions as set forth in the report clearly constitute conduct detrimental to the integrity of and public confidence in the game of professional football,” NFL executive vice president Troy Vincent wrote in a letter to Brady. The NFL always nails sanctimony. This is a sport that all but ignored a public health crisis—head injuries—or decades. Confidence leaked long ago.

Brady deserves a little stain on his “legacy” for this. After all, Joe Montana didn’t need deflation. Let the sports bars say he’s a fraud. But don’t keep him on the sidelines to send a hollow message, when you just don’t have the goods. 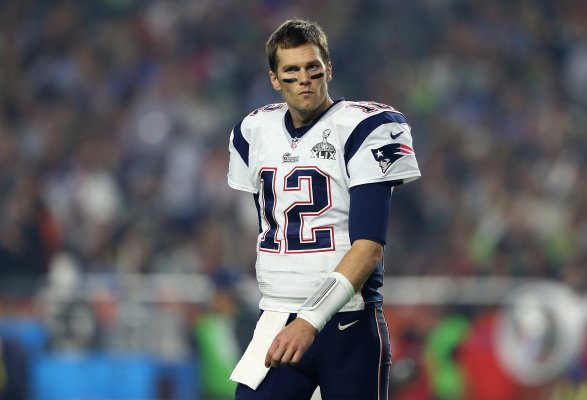 NFL Players Respond to Patriots Fine and Brady Suspension on Twitter
Next Up: Editor's Pick