What a crazy world we live in. As I sit here thinking about the current issues affecting mankind: fighting in the Middle East, earthquakes, famine, the 2016 presidential election, was Manny Pacquiao’s shoulder really injured, I think I speak for most Americans when I say the most concerning issue facing us today is painfully clear: Why are there no redhead emojis on iPhones?

Sure, there are certain assumptions and stereotypes that come along with being a redhead, most of which are totally overblown. So as I sit here in my dark room, lathering on the SPF 50, with my red-hot temper barely under control, I want to delve into the lack of redhead emoji representation. It’s no secret that we get a bad rap—I mean some of our PG nicknames include Ginger, Agent Orange, and yes, maybe even Carrot Top. (If you’re lucky enough, you can make a career out of one of those…)

According to Google, emojis first launched in the late 1990s in Japan, and, granted, there are very few redheads in Japan. The iPhone emojis are controlled and released by the Unicode Consortium (which I believe is Latin for “coding against redheads”). This group is in charge of the coding that displays characters and ensures that the same messages appear on the sender’s screen and the receiver’s screen. The latest update to the iPhone operating system was released in April, and it included a variety of diverse emojis, including same-sex couples, and the ability to change the emoji’s skin tone. All in all about 300 new characters were added. I don’t want to downplay the importance of these updates, but I can’t help but wonder, is this a sign of things to come for us redheads?

There’s a rumor going around that redheads are going extinct, and I shared my theory on why this is in my show at the Luxor in Las Vegas—It’s simply because nobody wants to have sex with us. Maybe these Unicode Consortionists have jumped on the bandwagon and don’t want to create a little redhead emoji because hey, nobody wants to create a redhead!

Scroll through the available emojis on your iPhone, and tell me why we have five variations of mailboxes but couldn’t swing one copper-topped smiley? (By the way, how many variations of smiley faces do we really need?) While we’re on the topic of the other emojis, there are french fries, hamburgers, beer, and donut emojis, but no carrot? Maybe this is a contributing factor to the obesity problem in this country. Let people text their friends that they are eating carrots, and change the world.

An estimated 63.2 million people in the United States had iPhones in 2014, and about 2% of the population is a redhead, which means that when roughly 1.2 million of my fellow redheads want to send a cartoon photo of themselves, the closest thing we have is a Jack O’Lantern or a red-faced devil—which only enables the stereotypes that we’re either pumpkins or Satan.

In addition to the technology lesson, allow me to give you a brief biology lesson, too. We have red hair because we have a mutated MC1R gene. Yes, we are mutants, but it’s not all bad. We actually have a couple advantages over a lot of you: We don’t go grey, and some have theorized that we might make Vitamin D more efficiently (I like to think of this as a superpower actually). In addition, some research shows that redheads feel pain more intensely, and this emoji omission really hurts. 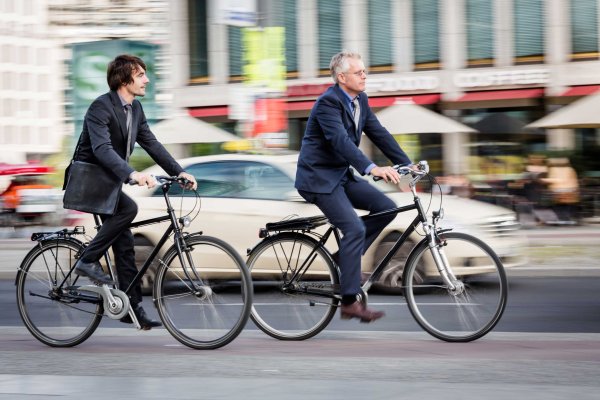 BikeSnob: The Problem With Bike to Work Week
Next Up: Editor's Pick