This Diet Is Better for Your Brain Than Low-Fat

You’ve heard a million times that the modern Mediterranean diet is good for you. Now there’s stronger evidence the diet may be good for your brain, too.

In a study published in JAMA Internal Medicine, Dr. Emilio Ros from the Hospital Clinic in Barcelona, Spain and his colleagues conducted a study of 447 men and women aged 55 to 80 years to see whether changing their diet could affect their performance on cognitive tests. The volunteers were healthy but at higher risk of developing heart-related problems; some smoked or had hypertension, for instance, others had a family history of heart issues. Everyone in the study was randomly assigned to eat, for about four years, a Mediterranean diet supplemented with 1 liter of extra virgin olive oil a week, a Mediterranean diet enhanced with 30 grams of nuts a day, or a low-fat diet. The researchers performed a series of brain functioning tests on the participants at the start of the study and then at the end of the study.

MORE: Here’s Another Reason to Try the Mediterranean Diet

“It’s never too late to change your dietary patterns to improve your health,” says Ros. “This surprised even myself.” The results, he says, are especially encouraging since the people in the study were at higher risk of developing cognitive problems because of their heart-related risk factors, which can also impair cognitive function by increasing risk of stroke and compromising blood flow to the brain. “If you intervene with a healthy dietary pattern in people who are at risk of cognitive failure, even in people who still haven’t had any memory complaints or loss of cognitive function, you can prevent cognitive deterioration,” he says.

MORE: This Diet Has Been Linked to a Longer Life—Again

The findings support a growing body of evidence that connects the Mediterranean diet, which is high in antioxidant-rich foods like rich vegetables and fats, and improved brain function. Because researchers now believe that the brain is damaged by free radicals produced by stress, a diet that is rich in antioxidants may help to counter that harm. A previous study involving the same group of participants found similar brain benefits of olive oil and nuts, but that trial did not follow volunteers over time to measure the change associated with the dietary change.

While these results are promising, Ros says that more work is needed to confirm them; the current study is relatively small and did not find, for example, a strong correlation between the Mediterranean diet and the rate of mild cognitive impairment, a measure of cognitive decline that often precedes conditions like Alzheimer’s. “I think these results contribute to our understanding of healthy aging,” he says. “With a change in lifestyle as simple making some healthy choices in your food, it can make a difference.” 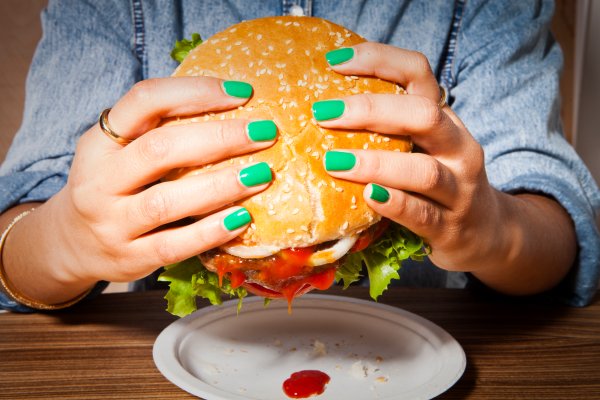 What a McDiet Does to Your Gut Bacteria
Next Up: Editor's Pick