President Obama may move closer to a career-defining Pacific Rim trade deal Tuesday that could permanently alter the balance of power between the White House and Congress on trade issues.

The Senate is expected to approve a bill to give the president “fast track” authority to make trade deals, reducing Congress’ role to approving or rejecting the entire deal. Members of Congress would not be allowed to filibuster a vote on a trade pact, add amendments, delete parts or otherwise tweak the final version of a trade deal.

If it passes, the bill would grease the skids for Obama to finish the Trans-Pacific Partnership, an unprecedentedly massive trade pact binding the U.S. and eleven other countries, including Japan, Australia and Chile, and governing 40% of the world’s GDP.

Most trade experts agree that if the fast track bill passes, it all but guarantees that the Trans-Pacific Partnership will too.

Supporters of the Trans-Pacific Partnership say getting the fast track bill passed is crucial since, without it, Congress could muddle up a document that has been delicately wrought in private negotiations for nearly a decade.

But critics of the deal, which includes an unlikely coalition of Tea Party Republicans and liberal Democrats, argue that passing the fast-track bill is akin to signing a blank check.

Conservative critics worry that the fast-track hands undue power to a president they already don’t trust. In an impassioned plea to supporters Sunday, Alabama Sen. Jeff Sessions wrote that the fast-track bill marks a “consolidation of power in the executive branch,” by eliminating “Congress’ ability to amend or debate trade implementing legislation and guarantees an up-or-down vote on a far-reaching international agreement before that agreement has received any public review.”

Liberal Democrats, for their part, argue that the Trans-Pacific Partnership would be bad for working class Americans by shipping more decent jobs overseas. Massachusetts Sen. Elizabeth Warren has said that the Trans-Pacific Partnership will strip safeguards on the financial industry and establish a shadowy international legal system, wherein powerful corporates can sue countries through private tribunals. Senate Minority Leader Harry Reid of Nevada has promised to filibuster it if it comes to that.

Meanwhile, Obama has launched an aggressive and unusually personal lobbying campaign to pass both the fast-track bill and the final trade deal. In past months, he has met with members of Congress in the West Wing, promised allies future political support, and publicly attacked members of his own party who have been critical of the deal.

On Saturday, Obama called his one-time top ally, Warren, “absolutely wrong” in her opposition to the Trans-Pacific Partnership. “The truth of the matter is that Elizabeth is, you know, a politician like everybody else,” he said in an interview with Yahoo News on Saturday. “And you know, she’s got a voice that she wants to get out there. And I understand that. And on most issues, she and I deeply agree. On this one, though, her arguments don’t stand the test of fact and scrutiny.”

Warren responded Monday by arguing that Obama should release the full text of the agreement now in order to clear the air.

The Senate is expected to pass the fast-track bill tomorrow by a hair, although it’s hardly a slam dunk. The House, which has not yet scheduled a vote on the bill, is likely to put up more of a fight. The final language of the Trans-Pacific Partnership itself will be hammered out by negotiators in Guam this week and in the Philippines later this month. 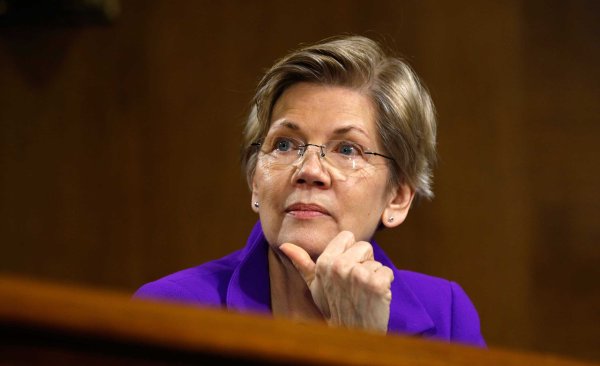