Anna Chlumsky—who plays Amy Brookheimer, the tightly-wound ticking time bomb of President Selina Meyer’s coterie—got to listen to her “impulse” as an actor when filming Sunday night’s episode. Chlumsky is used to keeping Amy’s stress just barely in check, but this season the character combusts, egged on by the inanities of Selina’s new adviser Karen (Lennon Parham).

Amy blows up at her high-powered boss, and issues the devastating parting line: “The fact that you are a woman means we will have no more women presidents because we tried one and she f–king sucked.”

Chlumsky talked with TIME about giving Selina hell, and what this means for the future of the show.

TIME: Amy full loses it. What was your reaction when you got the script?

ANNA CHLUMSKY: My reaction when I read the scene was kind of relief because I had been warned of it since the beginning [of this season] our showrunners were talking about how she was going to kind of have a stand off and I was like, oh wow. And I told them, well, let’s make sure from day one that it’s earned and that it’s just not out of the blue, that we can track Amy’s frustrations so that when it happens it really makes sense. So then when I did read it and it came very naturally when we read it around the table. I was relieved that it was going to make sense.

So you knew that this season was her breaking point.

I was told that they were headed there. My job this season was every chance that I was on camera, that you saw Amy that there was some type of bubbling, some type of where this is going to go, wherever she began. I think we really get to see her lose the reins a little bit beginning in episode four. It’s that thing where she’s kind of like, well what I’m doing now isn’t working, so now what? She’s starting to just kind of lose her ground. It was definitely at the forefront of my mind.

It’s very shocking because she’s always been intense but she has also always been subservient to Selina, and now she’s telling her there will never be another woman president because of her.

It’s so heartbreaking when she says that because I think when we all step back everything she says is debatable, but the whole thing is she’s saying these things in the heat of the moment. I think in many relationships anyone can identify with saying things that maybe sometimes it’s not to make sense but it’s to hurt. And I think that’s where she’s at. It’s highly emotional.

I feel like they’ve done that a lot this season like when Selina and Gary have their showdown in episode 2. What do you think it is about this season that everyone is saying these things that maybe they don’t actually mean?

I have no idea how it goes in the actual West Wing, but I think in our story, she and her loyal cronies like Gary and Amy have been working for this for so long and this is what they’ve wanted for so long and now they have it in a weird way. I think it’s that thing that happens where if you’re driven towards a goal a lot of times you can’t be distracted by the other stuff, but once you get it… it kind of opens you up to all the stuff you’ve been avoiding for all this time. I think it has something to do with that type of thing that happens to people. It’s the now what? And then it’s like, oh crap, now all of my fears and all of my anger and all of my injustices, all of that stuff is coming to the forefront when I was able to kind of put it aside for a long time. Also, in their lives now, the stakes are enormously high… they’re dramatic people. What Amy says, there will be no more women presidents, this is what she goes to bed thinking about and wakes up thinking about. Every waking moment is about not just getting Selina Meyer reelected, but the enormity of her losing that election. As a female, as a feminist, and someone who has worked for this, I think Amy relishes that kind of pressure, but that’s a lot of pressure for one person.

Even though she’s gone, Amy sort of wins at the end. Selina picks Amy’s suggestion, Tom James (Hugh Laurie), as her running mate.

And isn’t that beautiful? That’s what I think is the key to Selina and why she is still such a wonderful, well-rounded character, I think in lesser shows she probably wouldn’t listen… but she is smart she has been in politics for 20 years, she does kind of know what she’s doing. She gets messed up, but in the end, she actually is able to listen to reason, even though it had to be brought to that end.

What was it like playing that scene? Is it harder to do the moments leading up to it when Amy is bubbling with all this tension?

I think I had a lot of practice doing the whole bottling moment. More than in other scenes with Amy, I think this took more choreography. Just really planning out the beats… Amy feels all this stuff a lot but I have to suppress it playing her because she has to suppress it. So, like, finally I get to listen to my impulse. It did kind of feel, I don’t want to say cathartic, but it was certainly kind of releasing. It’s nice to be able to act big stuff.

The reactions in the room are also very funny.

Aren’t they heaven? Oh my God. When I saw it edited together I was just like, all right!

Did you ever break doing the speech because of what you were seeing on the other end?

No, not at all. That’s the gorgeous thing about having a scene like that. Once you’re in it, it just drives. She isn’t listening to them, so when I was playing it my intention was purely on Selina. However, it’s kind of funny too because Tony [Hale], who plays Gary, was right behind her so there were moments when you could see the horror and there were moments when you were like, this is going off the rails and then that’s the point of no return. You can’t be like, oh never mind. Then she’s just got to go for it.

What do you think it means that we see that core team dissolving?

Again, it probably has a lot to do with her being president now. We were in the Selina Meyer Company—I always used to say when Amy was chief of staff for the first three seasons that her job was to be CEO of the Selina Meyer Company, that’s what it was always about. And all of a sudden, we’re in the America Company. Definitely I think with the Dan stuff, even Ben offering to resign at one point, a lot of that has to do with saving the administration, saving face to the country, keeping people out of jail. Before it was feeding an ambitious goal, but this time around there’s greater stakes involved.

Obviously you can’t spoil anything, do you think people will come back around? Can Amy come back into the fold?

There’s a huge journey now that the people who have left have to go through, and I’m not sure. I have no idea how it ends up really. And when we come to episode 10 people will know exactly what I’m talking about. We really don’t know what’s going to happen. I say that completely honestly, although we do have a season 5.

I wanted to get your reaction to a Jezebel’s titled “Can Veep’s Dan and Amy Just F–k Already?” It says: “for viewer satisfaction [they] should definitely make out a few times on camera.” So what do say to the people who want Dan and Amy to get together?

Who can blame them? They are obviously two peas in a pod. In some unhappy Machiavellian world they are perfect for each other. Who can blame anybody who wants to just see them get it on already? It’s a long, long relationship for these guys. It’s very rich. 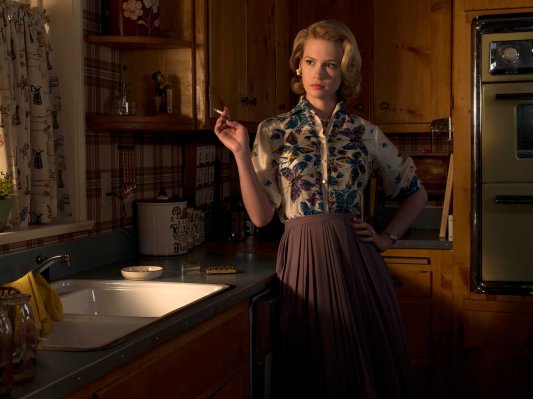 Why Mad Men Needed Betty
Next Up: Editor's Pick