Former Florida Gov. Jeb Bush courted social conservative voters with a sharp defense of religious liberty Saturday, but sought to distinguish himself from his party’s more vocal bomb-throwers on the subject.

In a commencement address at the evangelical Liberty University in Lynchburg, Va., the all-but-declared Republican presidential candidate charged President Obama with “supporting the use of coercive federal power” against those practicing their faith.

“Federal authorities are demanding obedience, in complete disregard of religious conscience — and in a free society, the answer is no,” he added.

Bush pledged to govern influenced by his faith, rejecting the “politically correct” idea that it should be kept out of the public sphere.

“The mistake is to confuse points of theology with moral principles that are knowable to reason as well as by faith,” Bush said. “And this confusion is all part of a false narrative that casts religious Americans as intolerant scolds, running around trying to impose their views on everyone. … Our friends on the left like to view themselves as the agents of change and reform, and you and I are supposed to just get with the program.”

Bush cited the case of Little Sisters of the Poor, a Catholic charity that objects to providing contraceptive coverage to their employees — as mandated by the Affordable Care Act — which has become a cause célèbre for conservatives wary of government influence in the religious sphere.

“I’m betting that when it comes to doing the right and good thing, the Little Sisters of the Poor know better than the regulators at the Department of Health and Human Services,” Bush said. “From the standpoint of religious freedom, you might even say it’s a choice between the Little Sisters and Big Brother – and I’m going with the Little Sisters.”

But even as he struck the conservative chords on religious freedom, Bush sought to position himself as a social conservative capable of reaching out to those of all beliefs. Bush declared that “some moral standards are universal” and can’t be shifted by public opinion, referencing his opposition to abortion and his efforts to keep Terri Schiavo alive, as well as the need to fight sex trafficking and stand up for oppressed minorities. But he conspicuously skirted the issue of same-sex marriage, which has divided the GOP field but is growing in support among young Republican voters.

He also made a religious case for environmentalism, saying the political debates “can be too coldly economical.” “Men and women of your generation are striving to be protectors of creation, instead of just users, good shepherds instead of just hirelings – and that moral vision can make all the difference,” he told graduates.

A convert to Catholicism, Bush didn’t directly reference his own faith, but briefly referenced Pope Francis. Bush quoted Dr. Martin Luther King, Jr. to make the case that he sees his faith as one that can help overcome injustice and raise up the poor.

“‘No law in the world,’ said Martin Luther King, “could have produced such unalloyed compassion, such genuine love, such thorough altruism,” Bush said. “The Christian faith, as Dr. King proclaimed, ‘adjourns the assemblies of the hopeless, and brings new light into the dark chambers of pessimism.’”

The even-keeled address contrasted greatly with the more red meat rhetoric adopted by many of Bush’s fellow Republicans on social conservative issues, such as Texas Sen. Ted Cruz, who launched his campaign at Liberty University.

Some Republicans have promised to fight to nullify an expected Supreme Court decision legalizing same-sex marriage nationally, and have used more forceful language to criticize the Obama administration. Bush’s approach was designed to signal to social conservatives that he believes with them, but that he won’t adopt rhetoric that could turn away the voters the party will need to retake the White House next fall. 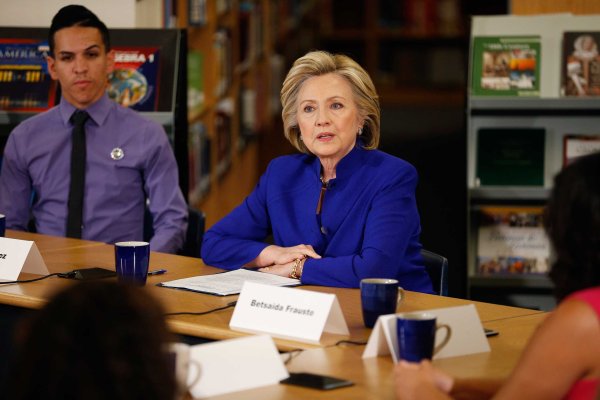