Throughout most of high school, Michael Martin—a senior at Musselman High School in Inwood, W. Va.—kept his sexuality hidden from his soccer teammates. “I was afraid I would get harassed, tormented, made fun of a lot,” said Martin, who knew he was gay since middle school. “I wasn’t afraid of physical abuse necessarily. But I thought guys would do stuff like throw the ball at me. On purpose.” Martin says he heard the word faggot all too many times.

According to new research released on Saturday, Martin is far from alone. The study, entitled “Out On The Fields” and billed as “the first international study on homophobia in sport,” is a survey of nearly 9,500 people, mostly from six countries (the U.S., U.K., Australia, Canada, Ireland and New Zealand). The researchers found that 80% of all participants and 82% of lesbian, gay and bisexual (LGB) participants “said they have witnessed or experienced homophobia in sport.” Of those reporting personal experience with homophobia, 84% of gay men and 82% of lesbians said they had received verbal slurs like faggot and dyke. Also, 81% of gay men and 74% of lesbians who were under 22 at the time of the study reported being completely or partially in the closet to teammates while playing youth sports. Nearly half of gay men and 32% of lesbians hid their sexuality while playing youth sports because they feared rejection by teammates. Only 1% of all participants believed LGB people were “completely accepted” in sports culture; 78% said that an openly gay, lesbian or bisexual person would not be very safe as a spectator at a sporting event.

“Unfortunately,” the authors wrote, “the study found few positive signs in any country that LGB people are welcome and safe playing team sports.”

(Participants in the study were not asked whether they identified as transgender, as experts consider transphobia and homophobia distinct forms of discrimination in sports, and the researchers decided to focus the study on sexuality rather than gender identity.)

The study found the U.S. had the highest percentage of gay men reporting that they had received verbal threats in a sports environment, and the highest percentage of gay men who heard slurs. In fact, of the six countries surveyed, the U.S. ranked worst in sports homophobia and discrimination, as measured by the “inclusion score” developed by the researchers. (Canada had the highest score, followed by Australia, New Zealand, the U.K., Ireland and the U.S.) “It’s sad that the U.S. fared so poorly,” said Pat Griffin, professor emerita in social justice education at the University of Massachusetts, Amherst, and a member of the academic team that advised the study authors. “It feels like we’ve made a lot of progress with the acceptance of homosexuality in sports. But going by these results, we have a long way to go.”

The “Out On The Fields” report comes with caveats. Though the project’s academic consultants insist that they reviewed the survey methodology and results, it’s not a peer-reviewed paper published in an established journal. The lead author is a former journalist who’s a member of the Sydney Convicts Rugby Union Club, Australia’s first gay rugby team. Joshua Newman, a sports sociologist from Florida State University who is unaffiliated with this project, reviewed the document for TIME. “The recruitment and sampling technique used likely resulted in a significant over-representation of higher-earning, racial- and ethnic-majority, pro-LGBT respondents to the study,” Newman writes in an email. “Are those representative of the broader populations in the English-speaking world more generally?”

Despite its flaws, Newman wrote, “I am inclined to say that the findings are important and the study holds the potential provide a significant contribution. This is the largest study of its kind yet to be undertaken. The results illustrate the extent to which LGB sport participants across multiple nations share common experiences of harassment, bullying, and even physical violence. It reaffirms what most LGB and straight athletes in these contexts already know, that homophobic language and action remain effective techniques for normalizing heteronormative masculinity in the sports domain. If we are going to take issues of (in)equality and civil rights seriously, this study reminds us that there’s no better place to start than on the sports field.”

Jason Collins, the first openly gay active athlete in the four major U.S. sports, has witnessed the power of sports firsthand. As more athletes come out, Collins thinks attitudes and behavior will change. “When I was in the closet, I would hear homophobic language in the locker room,” said Collins, who came out in 2013 and spent part of the 2014 season with the Brooklyn Nets. “However, when I came out, not one of my teammates ever used homophobic comments. It’s hard to change habits, it’s hard to change people’s language. But it is possible.”

Collins believes that sports homophobia would decline if Michael Sam—the first openly gay player to be drafted by an NFL team, now a free agent—got a shot. “We need Michael Sam to play in the NFL,” said Collins. “I know he’s been training hard. We just need an owner, a coach, one of the NFL teams to give him an opportunity.” Why is Sam so crucial? “The NFL is very popular in this country,” said Collins. “Just to have his example, as an openly gay NFL player, going out there making plays, helping his team win—it’s another example of somebody living their authentic life. And hopefully it would encourage other NFL players who are in the closet to come forward.”

The study found that many gay athletes chose to stay in the closet because they fear rejection from teammates. Arizona State backup offensive lineman Chip Sarafin, who last year became the first active college football player at a major program to publicly announce he was gay—Sam only told his Missouri teammates—found acceptance. “As long as you put forth the effort,” said Sarafin, “people won’t care about your sexuality.”

What advice do gay athletes have for younger players struggling with their sexuality in sports? “Don’t quit,” said John Fennell, an Olympic luge athlete from Canada who came out to teammates in Russia, of all places, during the Sochi Games. “All too often I hear about talented gay athletes who leave sports because they don’t feel welcome. But they do belong. If I had given up sports, I would have wound up on a very different path. Sports shaped the person I am. My tenacity, ability to set goals and achieve them—I attribute that to my success in sports.”

“My advice is that there’s a lot of love and support waiting for you when you live your authentic life,” said Collins. “I understand everyone has their own path. Trust me, it took me 33 years of my life before I told another human being the words ‘I am gay.’ I hope all of them get to that point of self-acceptance.”

Michael Martin, the high school soccer player from West Virginia, arrived there this fall. He finally told his teammates he was gay—and danced with his boyfriend in front of the school. He has no regrets. “I feel like I played completely better with that weight off my shoulder,” said Martin. “It’s an uplifting feeling. I’m so glad I did it.” 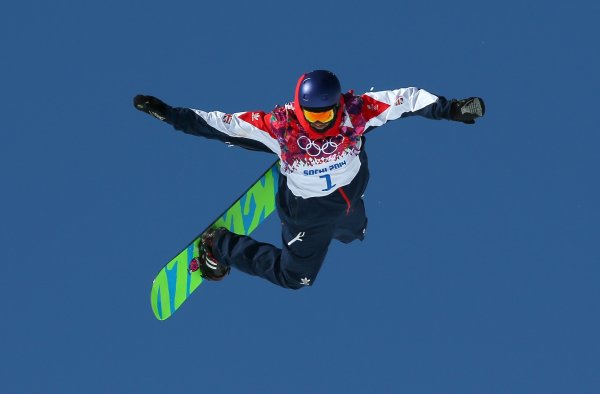 Watch a Snowboarder Land a Never-Before-Seen Aerial Trick
Next Up: Editor's Pick