This Graphic Shows Why the U.K. Election is not Quite as Democratic as it Seems

The U.K.'s Electoral Reform Society, a campaigning organization, created this image on Friday morning before total results had come in to show how a greater number of votes does not equate to more Members of Parliament (MPs) under the current British voting system known as First Past The Post.
Electoral Reform Society
By Naina Bajekal / London

Before the final results came in from the U.K.’s general election, in which Prime Minister David Cameron’s Conservative Party won a surprise majority, many British voters were already demanding reform of the U.K.’s electoral system, known as First Past The Post (FPTP). This image above made by the Electoral Reform Society, a U.K. pressure group, shows why.

Despite the fact that an increasing number of voters are opting for smaller parties like the right-wing populist United Kingdom Independence Party (UKIP), the Green Party and the centrist Liberal Democrats, thanks to the quirks of the U.K. voting system, this does not translate to an increase in the number of parliamentary candidates representing them.

The demand for electoral reform isn’t new, but it is expected to grow in the wake of Thursday’s election results. Under the current British system known as ‘First Past the Post’ (FPTP), voting takes place in 650 constituencies that elect a single representative to seats in the Parliament by simple majority. It is a ‘winner takes all’ system, usually allowing for a clear majority at local and national level. (It is the same voting system used to elect both chambers of the U.S. Congress, as well as being used in Canada and India).

One of the main criticisms of FPTP is that the number of votes cast for a party is not mirrored in the number of parliamentary seats it wins, as Thursday’s U.K. election shows. In the past Britain’s two-party system (in which the vast majority of people voted for the center-left Labour Party or the center-right Conservatives) operated fairly smoothly under FPTP.

A Channel 4 projection of what the U.K. parliament would look like now if it used proportional representation shows that the Conservatives would have still won the most seats, but their lead would be dramatically slashed, while UKIP would become the third largest party.

Nicola Sturgeon’s Scottish National Party (SNP) – which only stood in 59 constituencies, unlike the others – won 56 seats. The over-representation of the SNP and the under-representation of UKIP and the Greens in Parliament will lead to more demands for a restructuring of the electoral system, something Sturgeon has said she supports.

Many ordinary members of the public agree too. In partnership with campaigning organization Unlock Democracy, the Electoral Reform Society launched a ‘Make the seats match the votes’ petition online calling for a fairer, more proportional voting system on Friday morning. The petition already has nearly 17,000 signatures.

But given that Britain has used FPTP since the 19th century, and that the U.K. rejected electoral reform in a referendum in 2011, disgruntled voters may have to get used to the fact that the current system is likely here to stay. 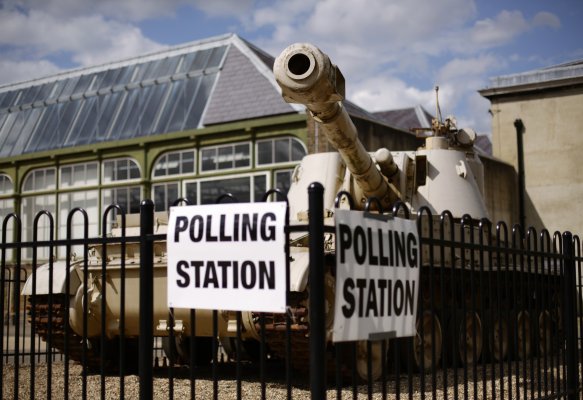 7 of the Best Tweets That Sum Up the U.K. Election
Next Up: Editor's Pick