Whitney Wolfe Wants to Beat Tinder at Its Own Game

On a sunny May morning in NYC, Whitney Wolfe smoothes her hair (golden) takes a sip of her iced coffee (black) and points across the leafy patio at a handsome guy sitting with a friend. “You swiped right in your head just now,” she says. “So did I.” Wouldn’t it be nice, she continues, if there were a bubble over his head listing his job and his education? Wouldn’t it be nice if you could just get up and say ‘Hi?’ And wouldn’t it be nice if there was no way he would think you were desperate or weird if you did?

A year after she was ousted from Tinder and nine months after she sued the company for sexual harassment, Wolfe is back with a dating app of her own, dubbed Bumble. In essence, the app is an attempt to answer her train of questions above. It works just like other dating apps—users see pictures of other users, swipe right if they like what they see, and get matched if the interest is mutual. But there’s one essential difference: on Bumble, only women can send a message first.

For Wolfe, 25, that key difference is about “changing the landscape” of online dating by putting women in control of the experience. “He can’t say you’re desperate, because the app made you do it,” she says, adding that she tells her friends to make the first move and just “blame Bumble.” Matches expire after 24 hours, which provides an incentive for women to reach out before it’s too late (the women-message-first feature is only designed for straight couples—if you’re LGBTQ, either party can send the first message.)

Wolfe says she had always been comfortable making the first move, even though she felt the stigma around being too forward. “I would say ‘I’m just going to go up to him,’ and all my girlfriends were like ‘Oh no no no no, you can’t do that,'” she says. “Guys found it to be ‘desperate,’ when it wasn’t desperate, it was part of a broken system.”

Like many startup founders, Wolfe has big ambitions for the service: “It’s not a dating app, it’s a movement,” she says. “This could change the way women and men treat each other, women and men date, and women feel about themselves.”

Bumble launched about six months ago and seems to be catching on. With around half a million users sending 200,000 messages per day, it’s growing about 15% every week, Wolfe claims. Some 60% of matches turn into conversations. While Bumble has not yet monetized and won’t disclose the details of its funding, Wolfe’s partner and major funder is Andrey Andreev, founder of Badoo, the multi-billion dollar European social network. Their Austin-based office has only six employees—and five of them are women.

Wolfe was a co-founder at Tinder and widely credited with boosting that app’s popularity on college campuses. She was fired in the midst of a breakup with Justin Mateeen, the service’s chief marketer. Last year she filed a sexual harassment lawsuit against the company, alleging that Mateeen had publicly called her a “whore,” that then-CEO Sean Rad had dismissed her complaints against Mateen’s harassment as “dramatic,” and that her male colleagues stripped her of her co-founder title because they said that having a woman on the founding team would “make the company seem like a joke.” The lawsuit was later settled out of court and Wolfe is reported to have walked away with over $1 million, with no admission of guilt by either party. Tinder is owned by IAC.

Wolfe won’t discuss the lawsuit, except to say that anyone who expected her to disappear afterwards probably didn’t know her very well. “It was never like I was going to go hide in the bushes,” she says. And while the whole messy incident has been held up to illustrate the challenges women face in a notoriously bro-friendly tech culture, Wolfe stops short of calling out sexism in tech. “This isn’t necessarily a tech problem, this is a society problem,” she says. “I don’t think it’s been socially acceptable for women to drop out of college and start a tech company.”

Wolfe is adamant that “Bumble has nothing to do with Tinder,” but the comparisons are inevitable—they have similar matching mechanisms (the swipe) similar designs (Tinder designers Chris Gulczynski and Sarah Mick also designed Bumble) and similar marketing on college campuses. Still, Wolfe insists she’s not trying to beat Tinder at its own game. “It’s important to me that nothing we do harms Tinder,” she says. “I still hold equity in the company. It’s my baby.”

But that doesn’t mean she’s not using similar tactics to get it off the ground. One of Wolfe’s major contributions to Tinder was her ability to get college students to download the app. A former member of Kappa at Southern Methodist University, Wolfe shows up at sororities with yellow balloons, cartons of yellow Hanky-Panky lacy underwear, and always, she says, “a cute purse.” Then she hands out a thong to each sorority sister who sends out 10 invitations to Bumble. “By the end, I’d show up and they’d be like ‘Go away, we’re already all on it!'” she says.

Because of the female-first messaging model, Bumble seems to be free of some of the sleaziness that plagues Tinder, at least for now. Men post pictures of themselves wearing button downs (not muscle tees) or hugging their moms (not endangered species.) And because they can’t message first, guys can’t hedge their bets by swiping right on every girl they see and messaging all of them to see who bites.

Female users say they’ve been impressed with the guys on Bumble. “I felt like I was being punked or something, because all the guys are really good looking and had really good jobs,” explains Lauren Garzon, a 32-year old hotel manager in NYC. “So I was like, ‘Ya, I do want to date all of you.'” She says she was disappointed that few of the guys she messaged wrote back, but Jen Stith, a spokeswoman for Bumble, says the company is considering adding a time limit to encourage guys to respond more quickly to messages.

Why do men use the app? “Because girls like it,” says Bryan Oltman, a 28-year old Bumble user and software engineer who used to work at OKCupid. “And girls like it because it gives them more control over the conversation than other dating apps.”

Besides, just as women are sick of waiting for men to make the first move, some guys are sick of always having to come up with a line. “It’s flattering when someone reaches out to you,” says Larry Mahl, a 32-year old New Yorker who works at Yelp. “It’s easier as a guy, you’re swiping and then just letting the girls take the next step.” Plus, he adds, “the women are so impressive.”

Wolfe pulls out her cell phone, which is hot pink with a bright yellow bumble-bee decal on the back, and shows me a guy she matched with in Costa Rica, of all places. “Hot, right?” she says. (Wolfe is dating someone, but still swipes and messages in order to get user feedback.) She had messaged him that she was the founder of the company, and asked him for his thoughts. He only had one thing to say: “This is going to be the next big thing.” 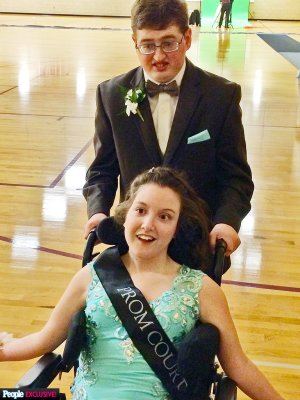