Firefighter Rescues a Worker Dangling From a Burning Apartment Building

A firefighter rescued a construction worker who was ready to jump from a ledge just in the nick of time Tuesday, as strong winds produced a massive fire that burned down a Houston apartment complex that was under construction, Associated Press reports.

In video shot from a nearby office by a woman named Karen Jones, the worker can be seen climbing down from the fifth floor ledge to the one below and then the fifth floor breaking apart right after the worker crawled onto a firefighter’s extension ladder.

What started out as a small rooftop fire at the $50 million apartment complex that witnesses say started around 12:30 p.m. yesterday became a blaze that 200 emergency personnel brought under control after two-and-a-half hours.

The Houston Chronicle reports that the cause of the fire is still under investigation, but it is possible that welders working on the roof started it, according to Houston Fire Department Deputy Chief Greg Lewis.

Below is the full two-and-a-half-minute video of the rescue, which the AP has also published: 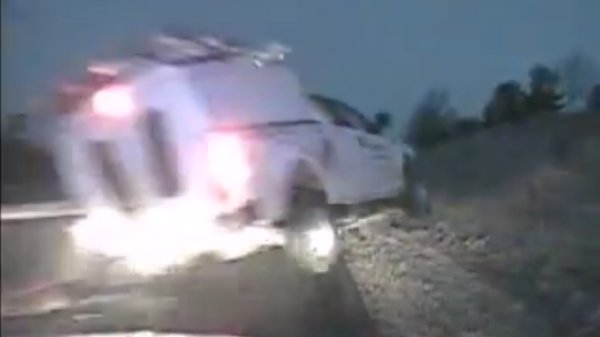 WATCH: Truck Flies Off Highway, Nearly Hits a Cop
Next Up: Editor's Pick