Cities Are at the Center of the 2016 Campaign

Children bike near a police barricade in downtown Baltimore during a May 2 protest.
Devin Allen
By Alex Altman

Instead of Iowa hay bales or patriotic bunting, Republican Ben Carson launched his campaign for President on May 4 by paying tribute to the inner city. Backed by a gospel choir that covered Eminem and a video featuring sign-waving Baltimore protesters, he reminisced about a drug dealer from his youth, who was beloved for dispensing candy to neighborhood children from his blue Cadillac. “We see turmoil in our cities all over our nation,” Carson told supporters in Detroit. “We need to start thinking about how do we get to the bottom of this.”

A right-wing star of Fox News and talk radio, Carson is the kind of conservative who compares Obamacare to slavery. But his decision to put the plight of urban communities at the forefront of his campaign was well within the mainstream. In the opening leg of the race for the White House, the most unexpected story line is the emerging consensus across the entire presidential field that it’s time to rethink a generation of misbegotten urban policy.

It’s an improbable plot twist after two decades of Republicans and Democrats embracing the tough-on-crime mantra of more cops and tougher sentencing. And like most political shifts, it’s driven by calculation as much as courage. As crime rates tumbled and budgets tightened, concern has grown over the financial and human cost of mass imprisonment. A recent Reason-Rupe poll found that 77% of Americans now favor eliminating mandatory minimum sentences, while 73% support allowing nonviolent drug offenders who have served their sentences to vote.

In response, nearly every candidate this year has jumped into a new national debate about how to reshape the criminal-justice system. “It’s an incredible political shift,” says Inimai Chettiar, director of the Brennan Center for Justice, a nonpartisan policy institute at New York University School of Law.

On the right, Senator Rand Paul wants to scrap mandatory minimums for nonviolent drug crimes and extend tax cuts to depressed urban areas. Republicans Rick Perry and Bobby Jindal have embraced drug-court treatment programs as alternatives to incarceration, while Chris Christie has called for an end to the “failed” war on drugs. On the left, former Maryland governor Martin O’Malley ditched a European tour to stroll the riot-racked streets of Baltimore, then announced that urban policy would be a centerpiece of his likely campaign. Once a champion of tough crime-fighting measures, Hillary Clinton used the first big policy speech of her campaign, on April 29, to call for mandatory body cameras for cops and more-lenient treatment of low-level offenders. “We don’t want to create another incarceration generation,” she said.

All this is happening because of the wave of clashes between cops and citizens in Baltimore and Ferguson, Mo. Images of police brandishing military-grade weaponry and looters snapping selfies before smoldering squad cars trained a national spotlight on the roots of the riots. The impact may be long-lasting. Crime, justice and the inner city will almost certainly play a role in the coming presidential-primary debates, after rarely rating a mention for more than a decade. “There’s finally been a recognition across the political spectrum that the policies that ramped up in the 1990s didn’t work and came at great cost,” says Marc Schindler, executive director of the nonpartisan Justice Policy Institute.

The shift in rhetoric is certainly dramatic. During the 2012 campaign, President Obama almost never spoke of inner-city issues on the stump, and Mitt Romney treated such matters as a distraction. Republican vice-presidential nominee Paul Ryan quietly lobbied Romney’s advisers to make urban poverty a part of his stump speeches. But Romney’s message targeted the entrepreneurs and “job creators” at the top of the income ladder, not those clinging to the bottom rungs, and the campaign saw little reason to squander resources on reliably Democratic voters. Ryan shoehorned a single speech into his schedule. “In this war on poverty, poverty’s winning,” he declared at Cleveland State University in late October.

But when the campaign ended, the tune changed. Obama told White House aides that justice reform would be a major focus of his second term, and Ryan hit the road, traveling to urban communities to study their problems. The visits produced a package of GOP proposals, including an expansion of the earned-income tax credit and the consolidation of federal antipoverty initiatives. Paul made the rounds of urban communities and historically black colleges, preparing for a presidential campaign predicated on the idea that Republicans’ struggles to attract minority voters could make them a minority party as the complexion of the country changes.

These efforts are part of a larger trend. During the crime-plagued 1980s and early ’90s, public opposition to draconian statutes came mostly from liberals and civil rights organizations like the American Civil Liberties Union. But by the turn of the century, conservative outfits were increasingly taking the lead. Social conservatives grew outraged at the moral costs of shattered families, libertarians bristled at jails swollen with nonviolent offenders, and fiscal hawks decried the 400% increase in prison spending over a 30-year period that mostly saw crime rates plunge. Amid the recession, red states experimented with new ways to reduce prison costs. “There was a growing realization on the conservative side that this wasn’t working,” says Pat Nolan, director of the Center for Criminal Justice Reform at the American Conservative Union Foundation.

The push got a boost on the right from the billionaire Koch brothers, who gave cover to candidates this year by joining a bipartisan coalition tackling issues like sentencing reform and overcriminalization. “To the extent that there are candidates that are working on these issues we care about,” Koch Industries senior vice president Mark Holden told TIME recently, “we’re probably going to want to support candidates who are in favor of helping people, helping the disadvantaged with their policies.”

Prospective 2016 candidates took notice. Texas Senator Ted Cruz joined a bipartisan effort to reduce mandatory minimums for nonviolent offenders. “I always say that I don’t change on issues,” former Pennsylvania Senator Rick Santorum told Bloomberg News. “This is one on which I have.” Like Carson, former Florida governor Jeb Bush–who said in 1994 that his policies would do “probably nothing” for the black community in his state–kicked off his likely presidential quest with a pilgrimage to Detroit, a byword for urban blight. “A broken promise” to combat poverty, he wrote on May 6 in the Chicago Tribune, “feeds the anger of Baltimore.”

An Article of Faith

Urban politics has been fraught for liberals for the past 25 years, and arguably longer. The scars of the 1988 election were slow to fade: a generation of ambitious Democrats had watched Michael Dukakis get pilloried as a wimpy, soft-on-crime liberal, and they vowed to avoid the same trap. “You have moderates in the Democratic Party who frankly have been raised up with this deep faith that their political success is dependent on them being tough on crime,” says Ben Jealous, the former president of the NAACP. “You’re asking them to challenge an article of their political religion, and it’s very scary for them.”

Among this group was an ambitious Arkansas governor named Bill Clinton, who ran for President in 1992 as a “new Democrat.” He campaigned on his support for the death penalty and 100,000 more cops and signed a 1994 crime bill that–among other things–curtailed parole eligibility, eliminated federal funding for inmate education and poured almost $10 billion into prison construction. But as the former President put it in a recent foreword to a collection of essays about mass incarceration, “We have overshot the mark.” Hillary Clinton, a vocal supporter of her husband’s crime policies, has backtracked from some of her tough positions. “Times change,” explained her spokesman, Jesse Ferguson.

Of all the 2016 hopefuls, perhaps nobody else grasps the complexities of urban policy like O’Malley, Clinton’s closest rival for the Democratic nomination. The former Maryland governor spent two terms as Baltimore’s mayor, transforming the crime-ridden city into a laboratory for urban policy, wielding data-driven crime-fighting techniques like CompStat and a zero-tolerance approach to community policing. Crime plunged. But in the eyes of some critics, his tactics laid the kindling that was set ablaze when 25-year-old Freddie Gray died April 19 of injuries suffered in police custody. (Six officers have been charged in connection with his death.)

In an interview with TIME on May 4, O’Malley made it clear that he too is thinking anew. He said his aggressive approach was appropriate for the era–and was later validated by voters. Gray’s death, he says, should spur an overdue debate about the revitalization of cities, which he intends to highlight in his all-but-certain presidential campaign. The protests that erupted over the past year may have been triggered by police violence, O’Malley adds, “but if wages continue to devolve as they have, if the lowest ends of us are working harder and harder and their children are hungrier and hungrier, then we are in for a lot of hot summers ahead.”

Channeling the urgency into change will be tricky. It’s far easier to talk about tweaking urban policy and criminal justice than to find the votes that might actually change the laws, and the looming campaign will only make it tougher. “We have a short window between now and the end of 2015,” says Christine Leonard, executive director of the Coalition for Public Safety.

Obama has pushed prosecutorial and sentencing reforms at the Justice Department and spoken repeatedly about the need to redouble efforts at urban renewal. But even he has sounded the charge lately with a kind of half-despair, knowing it will likely be the next President–Democrat or Republican–who will sign a bill that gives new federal tax breaks for urban communities, reforms the antipoverty programs of the 1960s or eases sentencing guidelines.

That is, if it happens at all. 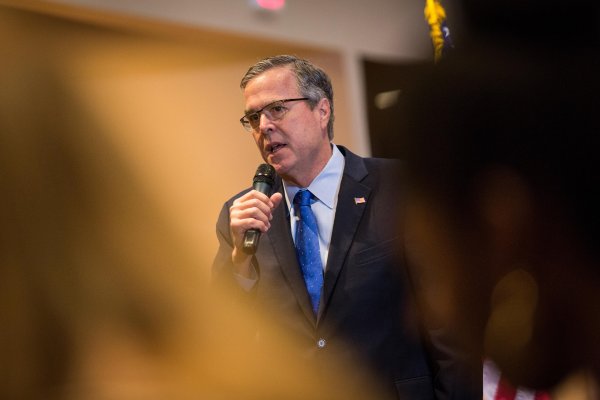 Jeb Bush's Union-Friendly Pension Law Could Haunt Him
Next Up: Editor's Pick