Why Schools Need to Bring Back Shop Class

The Education Committee of the U.S. Senate is currently considering the re-authorization of No Child Left Behind. Much of the original rhetoric in NCLB was about improving job readiness and employability. In a tragic irony, the focus of the last ten years has not been on improving vocational programs at all but on testing narrow academic standards. Overall, the impact on students, schools and employability has been baleful. This is the time to change.

A study from 2013 estimated that almost 6 million Americans between the ages of 16 and 24 are neither in school or work. Although the unemployment rate for that demographic is on the decline since its 2010 high, it’s yet to reach the lows of around 10-11% in the past ten years. Meanwhile, there’s a widening skills gap between what schools are teaching and what kinds of jobs are available and needed. There’s plenty of work to be done, but too many people lack the skills to do it.

In practice, our communities — and economies — depend on an enormous diversity of talents, roles, and occupations. The work of electricians, builders, plumbers, chefs, paramedics, carpenters, mechanics, engineers, security staff, and all the rest is absolutely vital to the quality of each of our lives. Yet the demands of academic testing mean that schools often aren’t able to focus on these other capabilities at all. Vocational programs – such as carpentry or welding classes, cosmetology classes or many of the other practical areas of study available in some US high schools and in the vocational schools that dot our cities and suburbs — are seen as second-rate options for people who don’t make the academic cut. As we argue in Creative Schools, this academic/vocational caste system is one of the most corrosive problems in education. It need not be.

As with many schools in the United States, the shop program at Analy High School in Sebastopol, California, had become largely irrelevant. The main shop room had become little more than a glorified storage room. The school’s priorities were firmly focused on college readiness and success at standardized tests, and vocational programs had taken a backseat. Sebastopol is also the home of Make magazine, one of the leading voices of the maker movement, a community of inventors and do-it-yourselfers that has blossomed on YouTube and shows up in the tens and sometimes hundreds of thousands at Maker Faires all over the world. Make proposed that a group of students from Analy come to their offices to explore the possibilities involved in creating things with 3-D printers, computer-aided design, and more. The program was so popular that soon Make could no longer accommodate it in their offices, so they agreed to donate equipment to Analy if the school would ramp up their vocational program.

Casey Shea, a teacher at Analy, ran with the idea. The shop room was cleaned up, new equipment was moved in, and others in the community donated materials, more equipment, cash, and expertise. The program became hugely popular very quickly— and not just among the ‘shop kids.’ “There’s a big range, from people struggling in Algebra 1 to people in AP Calculus,” Casey said. “At least half of the kids are on the ‘academic track.’ I think it’s because we have the cool factor of 3-D printers, electronics, and robotics.”

The program is doing much more than showing kids how to use a vinyl cutter. “These kids are getting the sense that their ideas can be transformed into marketable commodities,” said Shea. “They designed really cool ornaments for the holidays and we sold more than a thousand dollars’ worth of stuff. We just put together a coaster set for a local microbrewery. We’ve got a tremendous community of artistic people and small businesses that I’m sure would be willing to do what the brewery did. The kids have to go to the business and make the pitch and figure out what the cost would be by doing an analysis of material and time and all the other costs. I’m talking with a finance teacher we have to set this up as a business class on student enterprise, with real outcomes.”

Restoring the balance between academic and vocational programs is not just about job creation: it’s about raising standards of achievement overall. I spoke recently at a meeting in Los Angeles of alternative education programs. These are programs for students who are doing least well in standardized education: the low achievers, the alienated, the ones with low self-esteem and little optimism for their own futures. They include programs based in technology, the arts, engineering, and business and vocational projects. They work on practical projects or in the community, or on artistic productions and performances. They work collaboratively in groups, with their regular teachers, and with people from other fields as mentors and role models: engineers, scientists, technologists, artists, musicians, business leaders, and so on.

Students who’ve been slumbering through school wake up. Those who thought they weren’t smart find that they are. Those who feared they couldn’t achieve anything discover they can. In the process, they build a stronger sense of purpose and self-respect. Kids who thought they had no chance of going to college find that they do. Those who don’t want to go to college find there are other routes in life that are just as rewarding.

These programs show vividly that these students are not incapable of learning or destined to fail. They were alienated by the system itself. What struck me is that these programs are called ‘alternative education.’ If all education had these results, there’d be no need for an alternative.

It seems that for some policy makers, ‘academic’ is a synonym for ‘intelligent’. It is not. It has a much more limited meaning and refers to intellectual work that is mainly theoretical or scholarly rather than practical or applied. This why it is commonly used to describe arguments that are purely theoretical and people who are thought to be impractical. Of course, academic work is important in schools but human intelligence embraces much more than academic ability. This marvelous variety is evident in the extraordinary range of human achievements in the arts, sports, technology, business, engineering, and the host of other vocations to which people may devote their time and lives. The vitality of our children, our communities — and our economies — all depend on cultivating these talents more fully. That’s what’s really involved in leaving no child behind.

Sir Ken Robinson, Ph.D, is the author of Creative Schools, The Element, Finding Your Element and Out of Our Minds. He advises governments, education agencies and some of the world’s leading cultural organizations. His 2006 talk at the TED conference is the most watched in TED history. 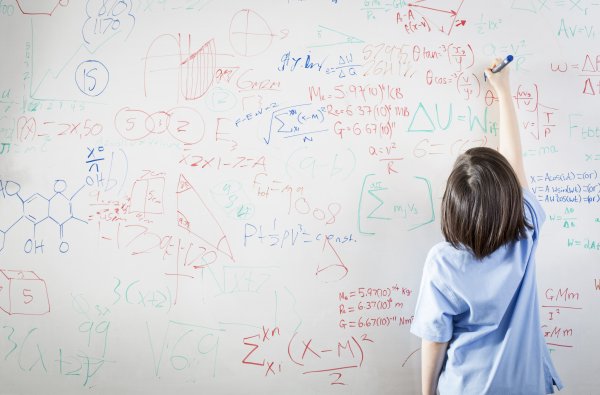 How to Get More Girls Involved in STEM
Next Up: Editor's Pick