3 Secrets That Will Enhance Your Cover Letter

You know that it’s beneficial to have a second set of eyes review your application materials. Someone who can tell you that your resume looks good—except for that part where you misspelled your own name (FYI, you can check that, too!). Or that your writing sample is impressive, but that it would be even better if you used the correct version of “their.”

But sometimes, no one is available. Maybe a contact said he would help but hasn’t replied since, and you don’t want to pester him. Or maybe you’re taking a chance in your letter and you’re afraid feedback from your stuck-in-the-mud roommate will make you lose your nerve and play it safe.

So what should you do? Write your very best letter, and then, before you hit send, try these three tips.

You know why you’re perfect for this job. That’s great, but that context can prevent you from spotting what’s missing in your cover letter. In other words, you might know that you excel at building strong bonds with difficult clients or that you’re an ace public speaker, but if your cover letter uses bland language like “connect with stakeholders” and “has led multiple presentations,” the hiring manager will have no way to know the depth of your skills.

So, take the advice that you surely received from some English teacher at some point, and “Show, don’t tell.” If you led “record growth,” employ the same strategies you did on your resume to quantify your achievements. In lieu of saying I could “adapt to change,” I’ve written this: “I have routinely found myself in inaugural or transitioning roles, such as a first-time admin role that became a communications position, or taking a position once held by two people and rolling it into one.”

Ask yourself, if a stranger handed you your cover letter, what impression would it make? Would you think this person has achieved what you have achieved or could contribute what you know you can?

2. Make Yourself Take a Risk

You’ve probably seen some advice suggesting you step outside of the standard “My name is Sara and I’m applying for such-and-such position…” (If you haven’t, look here, here, and here). But even if you spice up the intro a bit, you might hold yourself back from getting too creative, because as Muse contributor Dave Meadows writes, “Spice is good, but who wants to eat a spoonful of paprika?”

Honestly, one of the best cover letters I ever wrote was also the riskiest. And how I got over my fear of writing something over the top is that I reminded myself that I didn’t have to submit it. I didn’t write it in one of those finicky, little, online application boxes. I didn’t write in the same document as my pristine, go-to letter. I saved it under a different name and gave myself an hour to write down stories I thought exemplified who I was as an applicant and why I was right for the open role. Another time, I applied for a freelance writing position by submitting my cover letter in the form of an article—and yes, I landed an interview.

So, make yourself take a risk. Fill a document with words you’d use to describe yourself or slightly wacky, attention-grabbing first lines and examples. Then compare each document, and see if pulling a line or two from your risky letter will make your go-to stronger and more memorable.

Step one: Run spell check. Do not skip this step!

Step two: Locate a printer. If you don’t have access to a printer, it’s time for a field trip. Because in order to truly edit a cover letter, you’ll have to proofread it, and the most effective way to do that is to get it off of your computer screen and out in front of you—on paper.

So, print your cover letter and then read it out loud. Don’t breeze through it. Go slow, maybe use different voices—a super impressive voice, or an “I can’t believe I’m doing this” voice, or whatever works. As an editor, I can tell you that you’ll be surprised how often this tactic will show you that you’re actually missing a “the” and that without that three-letter word, your big, powerful sentence doesn’t make sense.

Cover letters don’t exist simply to torture you. They’re there because hiring managers are hoping you can flesh out your resume and provide them with a bit more information about why you’re right for the job. So, don’t submit the very first thing you write just to get it over with. Take the time to check your letter over—because you (yes, you!) have what it takes to write an amazing cover letter. 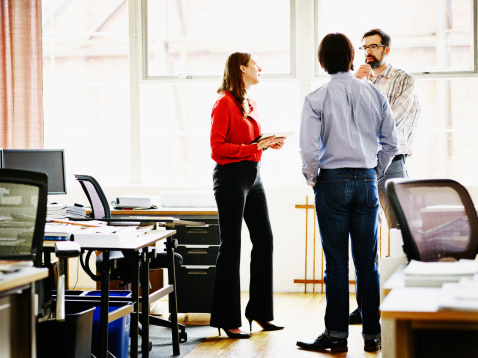 7 Conversational Tips to Be More Confident
Next Up: Editor's Pick