The Obesity Paradox: Can Body Fat Ever Be Good For You?

When it comes to a medical consensus on body fat here’s what we know: There isn’t one. The research is conflicting, interpreting the results can be confusing and even leading experts disagree about whether or not you can be healthy at any size.

More than one third of U.S. adults are obese. And being overweight or obese can put people at a greater risk for other health complications like heart disease and diabetes. Yet, in the last decade or so, there’s increasing data suggesting body fat may, in some cases, impart a kind of protective benefit. This has led to what’s known as the “obesity paradox”—the fact that moderately obese people with chronic diseases are often outliving normal-weight people with the same health issues.

“The explanation for these results is unknown and does not mean that patients with diabetes should try to become overweight,” the editors of Annals write. “Patients should continue to follow a healthy lifestyle.”

That doesn’t answer the question of why heavier people fared better by some measures, however—a question that has been plaguing researchers for more than a decade. Some researchers say they’ve had trouble getting their initial findings published in medical journals because it raises so many challenging questions. And for average joes, this emerging body of evidence continues to confuse.

Can Fat Help the Heart?

In a 2014 study, a team of researchers conducted a meta-analysis of 36 studies and found that a that low BMI in thousands of patients with coronary artery disease who underwent surgery was associated with up to a 2.7-fold greater risk of heart attack and heart-related death over a follow up period of close to two years. But overweight and obese patients had better outcomes and heart-related death risk was lowest among overweight patients with a high BMI compared to people with a normal BMI.

When asked what’s going on, study author Dr. Abhishek Sharma said his team could only speculate. “One explanation may be that overweight patients are more likely to be prescribed cardioprotective medications such as beta blockers and statins and in higher doses than the normal weight population. Further, obese and overweight patients have been found to have large coronary vessel damage, which might contribute to more favorable outcomes,” he said.

That year, Dr. Kamyar Kalantar-Zadeh, a professor of medicine at the University of California, Irvine, wrote an editorial in the journal Mayo Clinic Proceedings likening body fat to an unscrupulous friend. He writes: “Metaphorically, we can liken such cardiovascular risk factors as obesity to a friend who is a negative influence, causing the two of you to misbehave and be sentenced to jail, but once imprisoned, the friend remains loyal and protects you against poor prison conditions and other inmates.”

Still, not everyone is convinced. Dr. JoAnn E. Manson, chief of the division of preventive medicine at Brigham and Women’s Hospital, says that the finding that obese people with diabetes live longer is not consistent. Other studies have found the opposite to be true, and studies that look at a snapshot may not reveal the full story either she says.

In 2o12 researchers reported in the European Heart Journal that there are groups of people who are obese who are also metabolically healthy—people do not suffer from problems like insulin resistance or high blood pressure. “Physicians should take into consideration that not all obese people have the same prognosis,” the study authors wrote. The individuals they studied had higher fitness levels and better heart and lung function than other obese individuals, suggesting that perhaps it’s exercise that’s providing benefit for some.

“Metabolic health is on a continuum. People who are obese, even if they haven’t gotten to the level of hypertension, will still tend to have a higher blood pressure and blood sugar on average. Even if it’s within the normal range, it tends to be at a less healthy level overall,” says Manson. “People can cross over from being metabolically healthy to unhealthy over time. I think there are few, if any, circumstances where you would recommend that a patient be overweight or obese rather than a healthy weight.”

It’s also possible that body fat may be more complicated than our currently understanding of it allows. Some experts have speculated that it may be that the type of fat we carry on the inside is important. A 2013 study showed normal-weight people with heart problems who also have belly fat have worse survival rates compared to obese people who carry their weight elsewhere, like on their thighs or rear.

Belly fat, also called visceral fat, is more harmful than fat that sits right under the skin because it’s embedded in muscles and organs. Some argue that our reliance on BMI is part of the problem. Many agree it’s an imperfect measurement, partially because it doesn’t distinguish between fat and muscle.

A measure of belly fat may be a better indicator for overall health. Some people of different weights may carry fat of varying degrees of risk and, as Brigham and Women’s Mason points out, weight alone can’t tell the full story of someone’s health. After all, someone with a low BMI who is thin may be thin because of another underlying illness or factor.

The Bottom Line (For Now)

Right now, there’s still lots of speculation and few definitive answers regarding the obesity paradox. But what hasn’t changed is that being overweight and obese are risk factors for chronic diseases—and belly fat specifically may be a contributor. 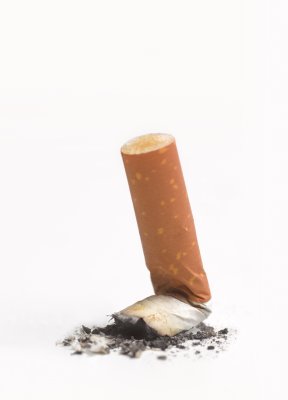 E-Cigs Not the Best Way to Give Up Smoking
Next Up: Editor's Pick