Landslides May Be Inevitable, But They're Not Yet Predictable

There was the rain. The tiny town of Oso in northwestern Washington state is used to wet weather—rain falls every other day on average—but the past few months have been positively biblical, with precipitation as much as 200% above normal. There was the geography: steep terrain composed of glacial sediment, which is a loose mix of sand, silt and boulders, the geological equivalent of a banana peel. And there was the history. Mudslides have hit the land around Oso numerous times over the past few decades, including as recently as 2006. There’s a reason that some residents used to call the area “Slide Hill.”

Yet when the earth gave way on the morning on the morning of Mar. 22, no one was ready for the scale of devastation. More than 15 million cu. yards (11.5 million cu. m), equivalent to three million dump truck loads, came tumbling down, burying nearly 50 homes in a hilly area 60 miles (97 km) northeast of Seattle. At least 16 people have died in the landslide, which covered more than a square mile (2.6 sq. km) and more than 170 people are listed as missing, even as hope of finding survivors dwindles. Even if the number of missing comes down, as officials have predicted, this will go down as one of the deadliest landslides in U.S. history.

There was no shortage of warnings. As the Seattle Times reported earlier this week, a study by outside consultants had been filed with the U.S. Army Corps of Engineers in 1999 warning of “the potential for a large catastrophic failure” on the very hill that collapsed on Mar. 22. A 2000 study by the engineer and geomorphologist Tracy Drury warned that future landslides would take an increasing toll because “human development of the floodplain in this area has steadily increased.” Yet while local officials claimed that residents knew of the landslide risks, there’s little evidence that much was done to try to mitigate those risks. A 1,300 ft. (396 m) “crib wall” of boom logs anchored by 9,000 lb. (4,082 kg) concrete blocks every 50 ft. (15 m) was built after the 2006 landslide. But it was helpless against the landslide. “The place was set up to be unstable,” says David Montgomery, a geomorphologist at the University of Washington.

But despite all that, it’s not surprising that Oso wasn’t ready when the earth collapsed. Even though they kill more than 25 Americans and cause more than $2 billion in damages each year on average, landslides are the “underappreciated natural hazard,” as Montgomery puts it. But as Andrew Freedman points out on Mashable, that’s in part because there’s no uniform, national monitoring system:

This is despite the fact that landslides are the most geographically dispersed natural hazard—all 50 states face at least some mudslide risk. But the widespread nature of landslide risk is part of the reason why there is no uniform warning system, although the USGS has put together a national map that identifies high-risk zones. (Unsurprisingly, they tend to be mountainous regions like the Appalachians, the Rockies and the Pacific Coastal ranges.) While landslides as a whole are common, they occur only rarely at any given location—even places as inherently unstable as the hills above Oso can go decades between slides. And while decades of study—and a national network of radar stations—has enabled meteorologists to predict hurricanes, tornadoes and other extreme weather with increasing precision, it is still incredibly difficult to identify when a landslide-prone hill will finally crumble. Heavy rainfall obviously plays a role, allowing water to infiltrate and loosen soil, but slides can also be triggered by earthquakes or erosion. “We can identify hazard zones, the places where you can expect a high probability of failure,” says Montgomery. “But it’s hard to say this slope will go on this particular day. We just don’t have enough data about the internal plumbing of the hillside.”

And it’s not just mountain towns that are at risk of landslides. Oregon state geologists have said that as much as 30% of metro Portland is in a high-risk zone for landslides, and a 2013 study by the University of Washington found that Seattle has some 8,000 buildings are at risk of an earthquake-induced landslide. Internationally, the danger is far greater: a 2o12 study in Geology estimated that rainfall-induced landslides alone—like the one near Oso—killed more than 32,000 people between 2004 and 2010, a massive toll, even though mudslides tend to get far less attention than earthquakes, hurricanes or tornadoes. Homes with a view come with danger attached, even if it’s one most people don’t know. Changing that fact might be the best way to ensure that the next major landslide is nowhere near as deadly. 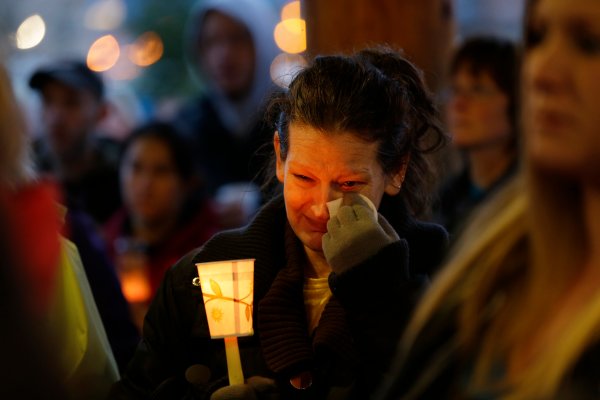 Hope and Fear After Deadly Washington Mudslide
Next Up: Editor's Pick