Indian Bollywood film actor Salman Khan (C) arrives in a car to appear at the sessions court in Mumbai on May 6, 2015.
PUNIT PARANJPE—AFP/Getty Images
By Rishi Iyengar

Indian actor Salman Khan was convicted of culpable homicide on Wednesday and sentenced to five years in prison, almost 13 years after he killed a man sleeping on a sidewalk in Mumbai and injured four others by running them over with his SUV. Khan was found guilty on all counts, which included rash and negligent driving and driving under the influence of alcohol.

“You were driving the car,” the judge told a downcast and visibly dejected Khan, according to news channel NDTV, rejecting the actor’s repeated denials over the past decade that he was behind the wheel. The Bollywood star listened to the verdict with tears in his eyes, according to the Press Trust of India, while local media reported that members of his family present in the courtroom broke down in tears.

Khan will now be remanded to police custody and will have to appeal to the High Court for bail.

Not unlike the Bollywood thrillers Khan is famous for, the hit-and-run case became a drawn-out saga full of murky details and dramatic twists. The 49-year-old son of actor and screenwriter Salim Khan has consistently denied allegations that he was behind the wheel of his Toyota Land Cruiser when it mounted the pavement in front of the American Express bakery in Mumbai’s Bandra locality on Sept. 28, 2002. He has also said he wasn’t under the influence of alcohol at the time, contradicting what victims, witnesses and a constable in his security detail have said in statements to the police. The constable died of tuberculosis in 2007, according to the BBC, but not before reportedly recanting his statement against Khan.

Khan appealed the initial charge of culpable homicide not amounting to murder, punishable by up to 10 years in prison under the Indian Penal Code, with the case going up to the Supreme Court before being referred back to the Mumbai sessions court in late 2013. However, months after a fresh trial began in April 2014, another witness turned hostile and retracted his previous statement that he had seen Khan get out of the driver’s seat after the crash.

In another sudden twist in March 2015, the actor’s driver substantiated his employer’s denial by saying in court that he was the one behind the wheel while Khan was sitting in the passenger seat. The driver, Ashok Singh, “told the court that the front tire of the car burst when he was driving Khan back from the Marriott Hotel, and before he could brake, the car had swerved onto the footpath,” defense lawyer Shrikant Shivade told Reuters. According to Singh, the reason Khan was seen getting out of the driver’s side door was that the passenger door was jammed.

The public prosecutor appointed for the case accused the driver of falsifying his statement, while Khan’s lawyers further argued that the deceased victim might have been killed when a crane called in to lift the SUV accidentally dropped it on top of him. Following the court’s decision, the driver will most likely be convicted of perjury.

Khan is a huge icon in India, and his 11.7 million Twitter followers make up only a fraction of his legions of fans across the South Asian nation. His films are known for being runaway hits at the box office, and his immense popularity has not been diminished by his repeated run-ins with the law.

The actor spent a week in prison in 2006 for hunting and killing chinkaras and a blackbuck — endangered varieties of Indian antelopes — during a 1998 film-production trip in the western state of Rajasthan. He has also previously been accused of assaulting his then girlfriend, fellow Bollywood superstar and former Miss World Aishwarya Rai.

Industry analysts earlier anticipated that the length of his sentence would affect his stardom more than any guilty verdict. “If he gets a brief term, given his fan following it will be easy for him to rebound,” film critic BB Nagpal told the Guardian. “But certainly 10 years will put a full stop on his career.”

Read next: Modi Gets a Bollywood Boost 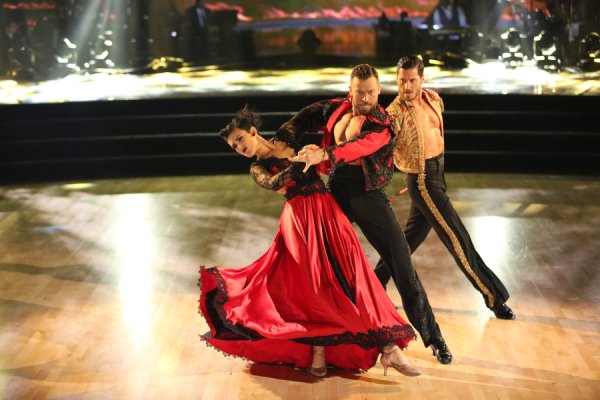 'Dancing With the Stars': Carly Rae Jepsen and Josh Groban Ring in the Semifinals
Next Up: Editor's Pick