The fast-food business may never have been in more flux than it is now. Higher food costs and increased competition are hitting the whole industry, while erstwhile mainstays (and not just McDonald’s) are dealing with ever-more-fickle consumers and new trends toward healthier fare. Given all that, it might seem surprising how well the industry as a whole (leaving out McDonald’s) is doing. Here’s a snapshot look at several of the biggest players.

This is the big one. Tastes are shifting and lifestyles are changing, taking consumers away from the same-ol’, same-ol’. People seeking quick meals are looking for more quality, for which they’ll pay a little (but not too much) more at places like Chipotle, Starbucks, or the prepared-foods counter at the supermarket. And when they just want a burger, more of them are opting for higher-end fare like that served up by Five Guys and others. Or else they’re going to Burger King or Wendy’s, both of which have been concentrating on upgrading their image.

In response, CEO Steve Easterbrook is trying to remake the company. He’s initiated a global restructuring, slashed costs, and revamped menus—including all-day breakfast, new toppings, pastries (to keep more people from fleeing to Starbucks and Dunkin’ Donuts), and the new, $5 Sirloin Third Pound Burger. It will be a while before we can know how successful these initiatives might be, but it was more than clear that something radical needed to be done.

Yum gets half its revenue from China, where it has about 7,000 Pizza Hut and KFC outlets in about 1,000 cities. Growth in that market had served the company well for years, and might again in the future, but for now, the company’s reliance on China is a problem. For one thing, consumer tastes are shifting there, just as they are in the United States and elsewhere. KFC and Pizza Hut are no longer novelties as both foreign and domestic competitors gain strength. A scandal last summer involving bad meat from a KFC supplier didn’t help matters.

But that doesn’t mean things can’t be turned around. The company’s stock got a big boost last week, when billionaire investor Daniel S. Loeb took a “significant stake” in Yum, citing its potential in China as a major draw.

Probably because it’s a private company, Subway often gets left out of examinations of the fast-food biz. But it’s the second-largest chain in the world, with about 43,000 locations (about 25,000 of them in the United States), and it brings in somewhere around $20 billion in revenue.

With its human mascot, weight-loser Jared Fogel, Subway has for years pitched itself as the “healthier” alternative to greasy burgers, pizza, tacos, and fried chicken. And that has largely worked—but fast-food is increasingly competitive for all players, and Subway isn’t immune. Nation’s Restaurant News reported in February that growth was slowing and revenues were nearly flat.

Yes, it’s a coffee chain, but it’s also a fast-food chain (sort of), as McDonald’s surely believes. Starbucks has been adding various foods to its menu for years, and its expected to keep adding more. That helped it boost store traffic by 3% in its latest quarter. The size of customer purchased also rose – by 4% (people aren’t ordering extra lattes—they’re buying sandwiches and salads.)

The company’s recent clumsy attempt at curing America’s racial ills doesn’t seem to have hurt it much. Last month, a Goldman Sachs analyst said that although Starbucks’ breakfast offerings have performed only so-so, there’s huge potential in its plans to expand its lunch menu.

Things are looking a bit better for Burger King than they were a few years ago, even though the chain hasn’t made any big changes. Even as executives were focused on the merger with Canadian coffee chain Tim Horton’s, sales stabilized, and in its most recent quarter, the company reported total sales at Burger King were up by 9.6% and same-store sales were up by 4.5%.

Burger King has been revamping stores and adding some menu items, like the heavily advertised chicken fries. But most of its efforts have gone into overall marketing and operations.

The No. 3 burger chain has been rejiggering its menu some, and pushing its online promotional efforts in an effort to update its brand to appeal to a younger crowd. It recently announced it will start selling organic Honest Tea drinks, and it’s testing a veggie burger that people seem to actually like. In the meantime, the company is working to spin off more of its stores to franchisees, which will help with both costs and profits in the future, but in the near term is tending to tamp down revenue.

Still, Wendy’s, which will release its first-quarter results on Wednesday, has reported same-store sales growth every quarter since the beginning of 2013.

The pizza chain’s TV commercial might elicit sniggers (“We’ve changed from Dominos Pizza to Dominos), but the strategy of adding new menu items like pasta and sandwiches — along with improving its pizza somewhat — seems to be working. In its latest quarter, Dominos reported that sales were up 11%, and same-store sales were up 16% 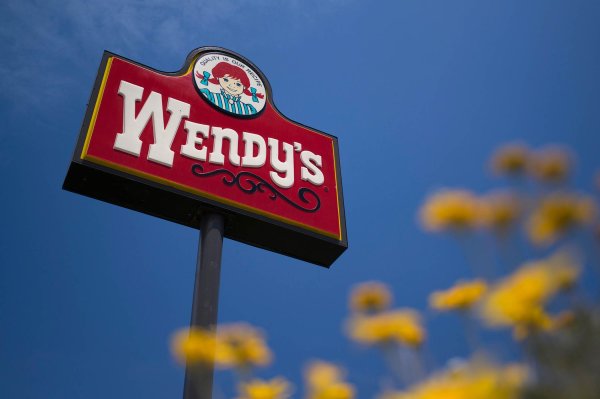 Wendy's Is Testing Out a Veggie Burger
Next Up: Editor's Pick