FBI investigators work a crime scene outside of the Curtis Culwell Center on May 04, 2015 in Garland, TX.
Ben Torres—Getty Images
Ideas
By Ayaan Hirsi Ali
Ayaan Hirsi Ali is the founder of the AHA Foundation and the author of Infidel, Nomad, and the new book Heretic: The Case for a Muslim Reformation.

Just before 7 p.m. on Sunday, May 3, outside the Curtis Culwell Center in Garland, Texas, two men got out of their vehicle and began firing. They hit one man, a security officer, in the ankle. A Garland police officer returned fire with his handgun and killed the two men.

At this early stage, much remains unclear. One of the shooters, Elton Simpson, has been identified as a convert to Islam who lived in Phoenix. The other, Nadir Hamid Soofi, lived in the same apartment complex and attended the same mosque. The obvious inference is that the two gunmen intended to attack the “First Annual Muhammad Art Exhibit and Contest” that was being held that evening under the auspices of the American Freedom Defense Initiative. It’s possible that the target was not the event but one of the speakers, Geert Wilders, a Dutch politician who has called for a ban of the Qur’an.

It’s important to congratulate the police and the security officers at the event. The policeman who took out the two would-be jihadists deserves a medal. Simpson and Soofie were armed with assault rifles and were wearing body armor. At a time when American police forces are being publicly pilloried for alleged misuses of force, this was exemplary. It’s likely that America just avoided its very own Charlie Hebdo massacre.

The thwarted attack in Texas comes at a time when several prominent authors have criticized the writers’ organization PEN for honoring Charlie Hebdo’s commitment to freedom of expression. The French satirical magazine had published cartoons of the Prophet Muhammad, an unforgivable insult in the eyes of the Kouachi brothers, who burst into its offices and shot eight of its staff, as well as four other people, including one police officer, in January.

Last month, the American PEN center announced it would award its annual Goodale Freedom of Expression Courage Award to Charlie Hebdo. In response, a group of writers—including award-winning novelists Peter Carey, Joyce Carol Oates, and Michael Ondaatje—signed a letter to PEN protesting the award. The signatories said that it could “be seen as being intended to cause further humiliation and suffering” to a section of the French population that is “already marginalized, embattled, and victimized.”

This was their argument against Charlie Hebdo’s mockery of Muhammad:

In other words, free speech needs to be qualified. No doubt those who endorsed the letter would make a similar argument about the Garland Muhammad art exhibit. And no doubt if the attackers had achieved the massacre they intended, we would hear the same words: “Yes, we believe in free speech, but…”

These writers have lost track of an important distinction. In the decades-old controversy over depicting the Prophet Muhammad, we must remember the difference between what constitutes the imagination and what is real. Adam Gopnik explains:

In other words, a distinction must be made between acts of the imagination such as cartoons, movies, books, and acts of violence such as mass shootings. The group that organized the Muhammad cartoon event, the American Freedom Defense Initiative, is using acts of imagination. In response, two men sought to use violence to try and silence them. There is no “but” in the First Amendment.

I am no cartoonist. But I do believe the Prophet Muhammad must be exposed to the same scrutiny applied to any religious figure—whether it be Abraham, Moses, Jesus, Buddha, or Joseph Smith. Applying scrutiny to the Prophet Muhammad is not an act of “hurting” Muslims or causing them “humiliation.” Instead, it can actually lead Islam to a better place—one where the imagination of every writer, artist, and citizen can run free, without fear of violent retribution.

You may not agree with me about that. As it happens, I disagree with some of the things Wilders says, and I’m not entirely comfortable with everything that comes out of the American Freedom Defense Initiative. But in a free society, such disagreements can never justify acts of violence. Nor can they justify acts of censorship.

Voltaire had it right. “I disapprove of what you say,” he is said to have written to the philosopher Claude Helvétius, “but I will defend to the death your right to say it.”

This week is the right moment to remind ourselves that the right to think, to speak, and to write in freedom and without fear is ultimately a more sacred thing than any religion. 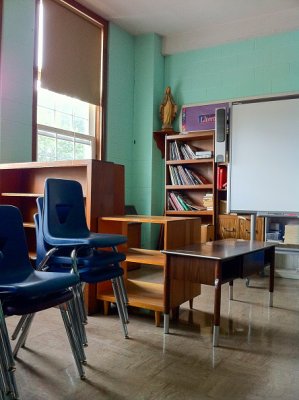 Are "Micro-Schools" the Future of Education?
Next Up: Editor's Pick