Rorqual whales (blue, fin, humpback among others) are not only the world’s largest animals but when they eat they open their mouths to such an extent that they are capable of ingesting a volume of water larger than their own bodies. On Monday, scientists from the University of British Columbia explained how they do this — stretchy nerves.

“These large nerves actually stretch and recoil like bungee cords,” A. Wayne Vogl, an author of the study to be published in May in the journal Current Biology, said in a press release.

Normally, a firm collagen wall surrounds nerves and if stretched they become damaged. For example, humans can suffer from “nerve stretch injury.”

In rorqual whales, the nerves are packed into a centralized core surrounded by limber “elastin fibers.” When the whale opens its mouth the design enables the nerve fibers to unfold. The feeding whale will then gulp-up floating prey before the nerve snaps back and the sea water is filtered through baleen plates in its mouth, leaving behind a massive quantity of small prey.

What’s more, the discovery was an accident. A team member picked up what he believed to have been a blood vessel and stretched it. But upon closer examination the researchers realized that the blood vessel was in actuality a nerve.

The scientists plan to keep studying the whales in the hopes to better understand the folding and unfolding process. 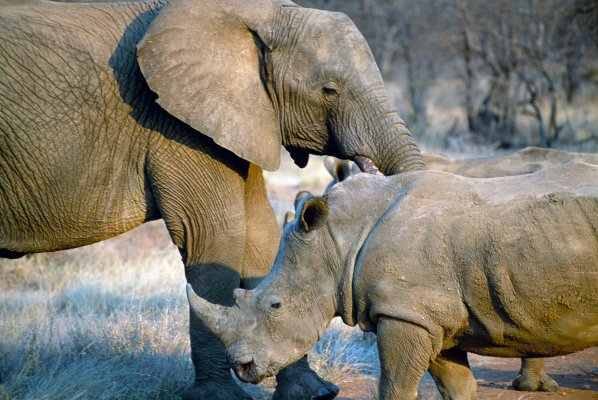 Elephants, Rhinos and Other Herbivores Face Extinction
Next Up: Editor's Pick