More Chinese Airlines Are Flying to the U.S. Than American Carriers to China

Planning to fly from Nanjing or Changsha to Los Angeles? Or Beijing to San Jose? Or Wuhan to San Francisco? If so, a Chinese airline has a flight for you — and chances are you’ll be traveling in a spiffy new Boeing 777 or 787.

This year, for the first time ever, more Chinese airlines will be flying to the U.S. than American carriers will be heading to China, according to CAPA-Center for Aviation. During this year’s peak July 1 to Sept. 20 time period, CAPA calculates that four major Chinese carriers — Air China, China Eastern, China Southern and Hainan — will send 2,028 flights to the U.S. per week, compared to 1,853 a week from U.S. airlines.

Just four years ago, American carriers offered almost twice as many flights on U.S.-China routes as their Chinese counterparts did, according to CAPA. But as more Chinese travel abroad, demand for trans-Pacific flights has skyrocketed. With the U.S. relaxing visa rules for Chinese, the boom looks set to continue. In two years — July 2013 to July 2015 — flight capacity between China and North America has increased by around 60%, according to CAPA and OAG figures.

Indeed, by 2034, the International Air Transport Association (IATA) estimates that one in five passengers worldwide will be traveling to, from or within China. Chinese airlines, naturally, are keen to exploit this massive market.

American airlines have likewise been targeting China — and low fuel prices are helping wring profits out of these notoriously costly long-haul routes. United has added a route to the interior Chinese city of Chengdu and now connects Shanghai to Guam; the American carrier still ferries more passengers between the two countries than its closest Chinese rival, Air China. This year, American Airlines will begin flying between Dallas and Beijing, and Delta will start a Shanghai-Los Angeles service.

But Chinese airlines are also expanding aggressively, particularly in so-called secondary cities, like Nanjing over nearby Shanghai. This summer, China Eastern will begin flying between Nanjing and Los Angeles, while China Southern already carries passengers between the central Chinese city of Wuhan and San Francisco. Further north, Sichuan Airlines controls the Shenyang-Vancouver route. In 2010, there was only an average of one long-haul flight a day to a Chinese secondary city, reports CAPA. By the end of 2015, there will be 11.

The expansion by Chinese carriers will mean smaller crowds of Chinese at Hong Kong, Japanese and South Korean airports, which have thrived as stop-over points for Chinese traversing the Pacific. China is undergoing an airport building-spree, with plans unveiled for nearly 70 new airports. Beijing, which expanded its current airport for the 2008 Olympics, is building a new airport that should be ready for business by the end of 2018. Chengdu’s new airport will have capacity for 80 million passengers per year.

Yet for all the expansion, China’s skies remain chaotic. In part because the military hogs most of China’s airspace, Chinese commercial airlines are cursed with some of the worst on-time records of any carriers in the world. Last month, IATA’s director general Tony Tyler chastised China for its air-traffic woes. Already, nearly 70,000 flights criss-cross the country a week. What will happen when more flights — and new local airlines — take off? 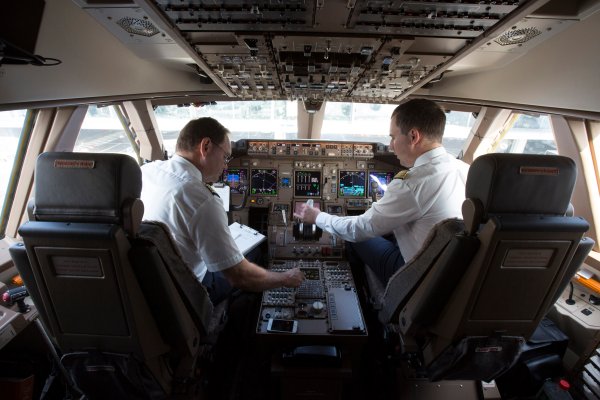 Why Some Airline Pilots Don't Want Cameras in the Cockpit
Next Up: Editor's Pick