The Republican Party has a whole new debate problem in 2016.

After suffering through a seemingly endless and unwieldy stream of 23 debates in the 2012 cycle, the Republican National Committee took control of the process, marshaling networks and candidates to agree to a framework where they only participate in fewer than a dozen sanctioned debates. But now the national party and networks face the new challenge of arranging as many as 17 candidates on a single televised stage.

Largely out of view, executives and journalists from Fox and CNN, with input from the national party, are weighing the entrance criteria for the first two debates. Among the options being considered is using polling as a rough inclusionary test, followed by a fundraising metric—dollars raised or the number of individual donors activated. All of these things are in flux as the networks and the national party struggle with the largest plausible debate field in history.

“This is truly historic in that normally you are trying to get people into the debates and now you are trying to whittle people out of the debates,” said one Republican operative familiar with the debate process. “You’ve never had more than 10 candidates in either party on a debate stage. You could get to at least 16 to 17 candidates and make a legitimate case for them being there—easy.”

The first debate, in Cleveland in August, will be the most pivotal, according to GOP operatives and campaign aides. Failure to earn a place on the stage will likely be the death knell to a campaign, depriving a candidate of an opportunity to shine, and a visible mark of failure in a crowded field. Republicans who have traveled the country boosting their name recognition but who haven’t made any steps toward actually running, like Rep. Pete King and former United Nations Ambassador John Bolton, are, by all accounts, out.

“There are only so many people you can hear from in a 90- or 120-minute debate, so you’ve got to be fair and transparent,” said the operative of the necessary winnowing.

Carson, according to a number of party insiders, is all-but-guaranteed a spot given his relatively strong polling in the GOP field. The bigger issue is former Hewlett-Packard executive Carly Fiorina—the only woman seeking the Republican nomination and also one of the party’s most ferocious Clinton critics—who barely registers in polling. Both announced their presidential candidacies on Monday.

Conservative radio host Hugh Hewitt, who will join in questioning the candidates at the second debate sponsored by CNN in partnership with Salem Radio Network at the Ronald Reagan Presidential Library in Simi Valley, Calif. in September, told TIME Monday he hopes that all credible candidates are included. “It should be a credible path to either the nomination or the vice presidency or a senior position in the next administration,” Hewitt said, before adding the final decision isn’t his.

There’s also the matter of Donald Trump. The reality television star has formed a presidential exploratory committee but has yet to officially declare himself a candidate for the White House. Should he do so, many Republican insiders say it would be hard for the party to exclude him—voters find him entertaining and he has a large megaphone with which he could embarrass the GOP. “This sounds crazy, but it’s safer to just include him,” said one 2016 presidential aide.

Beyond the first debate, the RNC is hoping to progressively tighten the debate criteria as the primaries approach, effectively winnowing the massive GOP field and signaling to voters which candidates have the wherewithal to go the distance.

But even if all the declared candidates make the stage, there is still the not insignificant problem of running a debate with a football squad on stage. “Here’s my radical suggestion: four hours—and I am dead serious—four hours with five minute breaks at the top of every hour, let people go out to the bathroom, let them talk to their aides,” Hewitt said on his radio show. “They will get huge ratings. No one’s going to rush, no one’s going to feel like they’ve got to get their time in, as opposed to the classic 90 minutes.”

Stuart Stevens, Mitt Romney’s chief strategist, criticized the media’s hyping of third-tier candidates to boost ratings last cycle in a much-circulated 2013 essay. He told TIME recently that he supports the RNC’s efforts, but said news outlets must take steps to ensure only those candidates who can actually win make it on stage. “The news business is a business and very competitive, of course, but it wouldn’t be a bad thing to see leadership from media working together to avoid the obvious problems of 2012,” he said.

For some candidates, the problem may be even more fundamental than the debate stage. They need to make sure they are included in polling, first. In an NBC/Wall Street Journal survey released Monday, the roster of candidates did not include Ohio Gov. John Kasich, Louisiana Gov. Bobby Jindal, South Carolina Sen. Lindsey Graham, and former Pennsylvania Sen. Rick Santorum.

“I am reasonably confident that I will make sufficient progress to be on that debate stage in August,” Fiorina told reporters Monday morning, just hours after she declared her candidacy in an interview on ABC’s Good Morning America. “They ought to be looking at support, they ought to be looking at endorsements,” she said, adding, “I think the polls will come along in due time.”

Last cycle’s debates were notable for their ability to drastically reshape the race, creating and destroying candidates like Santorum, Newt Gingrich, Herman Cain and Rick Perry. After the party’s 2012 defeat, Republican chairman Reince Priebus defied beltway expectations and seized control of the primary debates process. “I think having control over the debates so that we don’t turn this into a 23 debate circus in front of people who don’t care at all about the party but only care about making news for themselves, that’s number one,” Priebus said earlier this year when asked which of the party reforms he implemented is most significant. 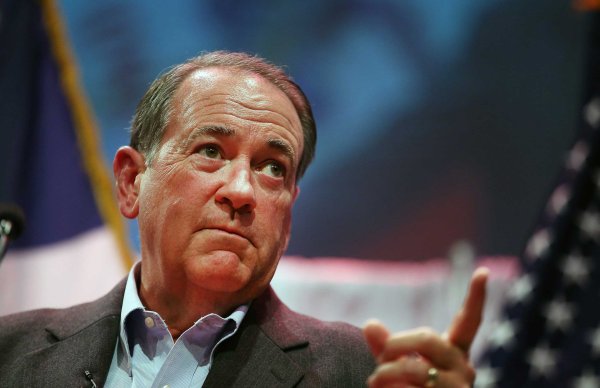 Top Huckabee Aide Steps Back from Gay Marriage Support
Next Up: Editor's Pick