How a Chinese Company Became a Global PC Powerhouse

A Lenovo Group Ltd. logo is seen on a laptop computer displayed at the company's flagship store on Qianmen Street in Beijing, China, on Tuesday, Nov. 11, 2014.
Bloomberg—Bloomberg via Getty Images
By Tim Bajarin

One of the great business stories of the last 10 years is how Lenovo, a Chinese company, was able to take IBM’s PC unit and integrate it into its own, becoming a global technology powerhouse in the process. The story is one of the greatest case studies on how to merge massive international enterprises into a winning firm.

As part of my consulting gig for IBM back in 1984, I was asked to be part of the company’s first laptop research program. The IBM PC had been on the market for three years by then, and many of IBM’s customers were clamoring for a more portable version of that PC. During a two-year period I often traveled between Austin, where the laptop was being designed, and Boca Raton, IBM’s PC headquarters, to work with the teams as they tested various models. Eventually, they came up with what was IBM’s first clamshell-style PC that found success on the marketplace.

Over the next five years, IBM’s laptop designs took advantage of newer screens, processors and battery chemistry. Their laptop morphed into what has become the very popular ThinkPad brand. For most of the 1990’s and early 2000’s, IBM had a strong PC business; the ThinkPad was the anchor of their portable line. But by 2004, IBM’s business had changed, and it was looking to get out of the PC hardware business. So on May 1, 2005, IBM sold its PC business to Lenovo — and over the last 10 years, Lenovo has become the #1 PC player in the world.

Since I was close to IBM and had been on their mobile advisory board at the time, myself and about eight other analysts were invited to go to Beijing to meet with Lenovo’s management team, speak with its executives and hear its vision for what had been IBM’s PC products. At first, I was highly pessimistic about the success of this venture. Here was a Chinese company that was going to take over IBM’s famous PC business and try and make itself into a strong global brand. At the very least, I figured the culture clash would be a major issue. Plus, almost all of the IBM employees being sent to Lenovo in the deal were Big Blue lifers, and I suspected the top talent would choose to stick with the company they knew.

It turns out that Lenovo was able to coax most of IBM’s top PC execs to join the new venture. They helped assure IBM’s corporate customers as well as any consumers who bought their products that everything would be business as usual, and that Lenovo would honor all past warranties and service their needs well into the future. An initial hiccup came when some in the U.S. government were reluctant to give a Chinese company access to government data or contracts, but within a year the deal began to smooth out.

Lenovo’s success has to be credited to the hard work of the Chinese and American teams. The merging of these two business cultures alone is quite a feat.

One thing I didn’t expect is that the Chinese leadership took a hands-off approach to the U.S.-run PC company, fully trusting their leadership to keep the business moving forward. That was one of the assurances us analysts got during our trip to Beijing, but I wasn’t sure that would hold true. But Lenovo’s Chinese management put a great deal of trust in Steve Ward, the architect of the deal from IBM’s side.

I recently spoke with Peter Hortensius, who is Lenovo’s Chief Technology Officer and a Senior Vice President who joined Lenovo as part of the executive team that came from IBM. He told me that Lenovo’s dedicated focus on delivering innovative products and being willing to branch out in new areas is key to its growth. Last year, Lenovo bought Motorola and IBM’s server business, adding new breadth to its product offerings. Although relatively new to the smartphone wars, over the last five years they have become the #3 smartphone vendor in China and #4 globally. They are also the #1 PC vendor in the world, with an extremely strong position in China in both business and consumer PC’s. According to Hortensius, “Lenovo is committed to creating great hardware based products, plus a rich ecosystem that will be a driving force for their future.” He pointed out that software plays a major role too, and that Lenovo plans to continue to innovate in hardware and software to help differentiate itself from the competition.

I’ve had a front-row seat for Lenovo’s evolution, letting me see up close how it used the integration of the IBM PC business to become one of the major tech companies in the world. They consistently get high customer ratings, and now with Motorola and the new server business, it seems poised to grow exponentially. When I asked Hortensius what the company would look like in another 10 years, he said Lenovo, under the leadership of Chairman and CEO Yang Yuanqing, the company will grow in all of the categories they compete in now, and did not rule out the idea that over time the company could broaden its product portfolio still further. From my experience, Lenovo is an extremely focused company that is highly disciplined, with a powerful leadership team that seems to all be on the same page. Ten years ago, none of us could foresee how Lenovo acquiring the IBM PC business would turn out. Now we know. 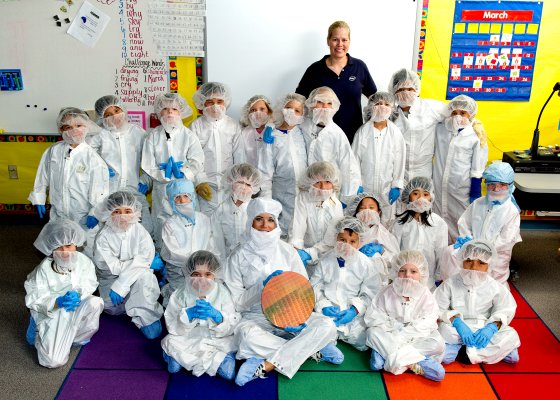 How Intel and Boeing Are Helping These Kids Learn STEM Skills
Next Up: Editor's Pick