7 Most Surprising Things About Owning an Apple Watch

I’ve had an Apple Watch for a little over a week now. The most common question people ask you when you’ve got Apple’s wearable computer on your wrist is, “Has it changed your life?” Which is an odd question to ask about a gadget that starts at $349 and is, in large part, an accessory to your phone.

But the question points to the peculiar state Apple and its customers find themselves in at the moment. Anticipation and chatter about the Watch is high, but few people have actually seen one in the wild. The Watch’s rollout is unique compared to previous Apple products in that customers can, for the most part, only order it online and that initial supply appears to be extremely limited.

So has the Apple Watch changed my life? No. But it is an incredibly well-designed, compelling product. (I’m wearing a 38-millimeter stainless-steel model, which retails for $949 with a matching link bracelet.) A full review is coming—once the blush of newness has worn off—but in the meantime, here are the most surprising things about using an Apple Watch:

The battery life is very good.

One of the most prevalent initial concerns about the Watch was how long its battery would last. Presenting the device, Apple CEO Tim Cook said he personally recharged his every night, suggesting about a day’s worth of charge. And yet, many were skeptical.

Happily, this quasi-promise turns out to have been on the conservative side. I’ve been wearing the Watch during fairly long days (7AM-10PM) and have yet to have it flip into reserve power mode, which limits some functions while preserving time-telling. Most days, even ones that include a half an hour to an hour of exercise, the Watch has had about 20% battery left when I pop it into its charging cradle in the evenings.

MORE The Odd Thing Apple Banned from the Apple Watch

This is all the more impressive since I’ve been poking and prodding it more than I might once I’ve worn it for a few months. There is a caveat, several days of charge would allow sleep-monitoring, something many dedicated fitness trackers now do by default.

This may seem obvious, but I find the design to be one of the Watch’s chief virtues. All of Apple’s products are deeply thought-through and finely milled. But the Watch isn’t just a gadget, it’s fashion. It’s just a nice looking object. And much of the time, that’s all it is since the screen automatically turns off to preserve power.

The Watch doesn’t have a built-in keyboard. Which makes sense since typing on it would be difficult, if not impossible. If you want to search for a location in Maps, send a text message, or set an alarm or timer, you can dictate using a version of Siri, Apple’s digital personal assistant. This works incredibly well. I routinely find myself lifting my wrist and saying “Hey Siri,” which launches the Siri app. From there, using Siri is very much the same as on an iPhone or iPad (though, the Watch implementation doesn’t talk back).

People don’t notice it (much).

Aside from a few Apple diehards who honed onto my wrist like heat-guided missiles, few people seem to notice I’m wearing a smartwatch. This is comforting since, I’ll admit, I was a little worried about making a statement. This may owe to a preference for long-sleeve shirts or to having the smaller version. Whatever the reason, it’s nice to not have to have a conversation about the Watch unless I choose to, say, by obnoxiously and grandiosely offering to tell a coworker the time even though she never asked.

There are lots of apps.

And some of them are pretty good. Apple is initially limiting how much access app developers have to the Watch’s underlying hardware, like the heart rate monitor for instance. That limits some of their functions, but also likely helps preserve battery life and minimize software conflicts. That also means, in practice, a lot of third-party apps are limited. My favorite so far: Nike+ for running, taxi-hailing service Uber, Hue to control my apartment’s smart lighting, Instagram, and one more I’ll get into below.

Apple loaned me a link bracelet and a white sport band. Switching the bands is extremely easy—and addictive. I’ve been swapping them out depending on whether I plan to exercise or not, but I could see having a range of bands depending on what I’m wearing, et cetera. Much like accessories for the iPod, iPhone, and iPad before it, I anticipate the secondary market for Watch bands becoming considerable in scope.

And an obvious bonus: TIME looks great on it.

Not a surprise, really. And I’m clearly biased, but if you have an Apple Watch, make sure to check out our app. More details here.

Read next: Why Tattoos Might Be a Huge Problem for the Apple Watch 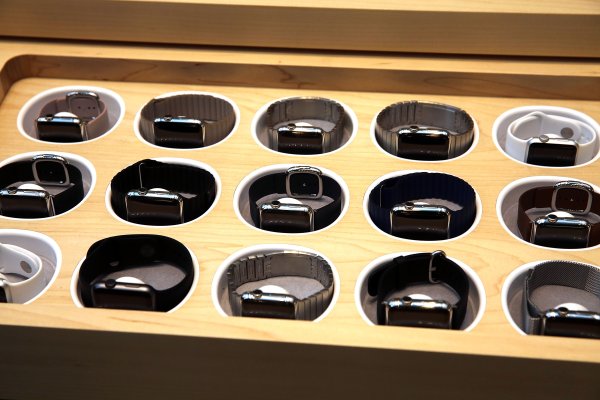