Like millions of their countrymen, thousands of fans in Manny Pacquiao’s hometown in the southern Philippines were left disheartened and dejected Sunday afternoon, after their hero and champion lost to Floyd Mayweather in the “fight of the century” by unanimous decision.

“It’s not fair,” said 36-year-old Judith Lozano of General Santos City as she reached under her glasses with a handkerchief to wipe tears away. “You could see Manny was hitting him more.”

As Michael Jordan, Beyoncé, Clint Eastwood and other A-listers filed into the MGM Grand Arena in Las Vegas for the richest fight ever (expected to generate revenues in excess of $300 million), Lozano and over 5,000 other residents of Gen San, as the locals call it, made their way to a public sports facility for a free screening organized by the local government. Tickets for the fight were distributed in all the local barangays (administrative wards) in mid-April on a first-come, first-serve basis.

As with the rest of the Philippines, General Santos comes to a complete standstill whenever Pacquiao fights, and the biggest fight of his career was no exception. People were pouring off the streets and into the three-tier public gymnasium well before the encounter began.

“We are very proud of Manny Pacquiao because he brings honor not only to our country but also to Gen San,” said Karen Cunanan. The 34-year-old got tickets through a friend and was attending with her son and nephew.

Samuel Malinao was not so lucky, having been at work when the tickets were given out in his locality. But the 40-year-old trailer driver joined hundreds of others outside the arena, watching the fight on televisions set up on rickety wooden tables. “I’m excited,” Malinao said. “I feel very proud of him.”

Both of them anticipated a Pacquiao win, naturally, but the universe had other plans.

The massive crowd inside the gymnasium appeared somewhat subdued in the lead-up to the fight, with only a smattering of applause and disjointed cheers whenever the cameras swiveled onto Pacquiao’s face.

As soon as the fight began, however, it became clear the fans had merely been conserving their energy. Every swing at Mayweather elicited tumultuous roars of approval, and punches that landed had them jumping out of their seats. As the 12-round fight wore on and Pacquiao’s American opponent appeared to be gaining the upper hand, there was a palpable dip in the crowd’s boisterousness — but not its confidence.

“I think Pacquiao is dominating the fight,” said 29-year-old Hermie Cadorna during the 10th round, balancing precariously on a ledge to see above the crowd outside the stadium. “He is throwing more punches.”

It was a view Pacquiao himself would go on to express after the loss, saying, “I thought I won the fight, he didn’t do anything.”

But regardless of the outcome, the Filipino icon will receive the same adoring reception he always does when he returns home on May 8.

“Manny’s still our champion,” said General Santos City Mayor Ronnel Rivera, who was traveling this week but came back especially for the fight. “He deserves a hero’s welcome.” 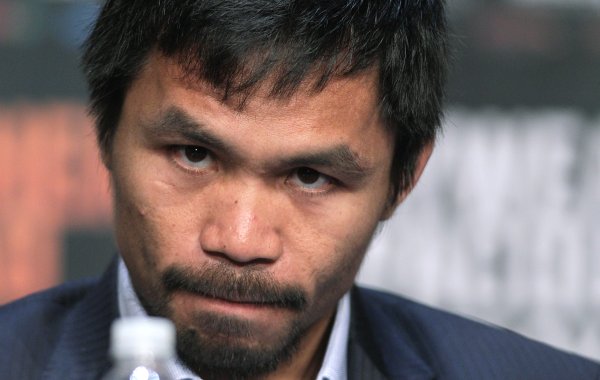 Manny Pacquiao's Hometown Readies for His Biggest Fight
Next Up: Editor's Pick