During World War II, hundreds of photographers and reporters were dispersed around the world on behalf of the Associated Press. In 1945, when the war ended, the agency published Reporting to Remember, an anthology of first-hand accounts of what they saw, alongside great photographs like the one shown here. For the 70th anniversary of V-E Day — May 8, 1945 — Rosetta Books is republishing those accounts as the e-book World War II: Unforgettable Stories and Photographs by Correspondents of the Associated Press.

The following essay, In a Schoolhouse at Rheims, Four Copies Were Signed, by Relman Morin, who died in 1973, is an excerpt from that book.

Shortly after midnight, the clouds crept down on Rheims from the north, blotting out the stars and the pale yellow curve of the moon. The cathedral spire, a dark dagger against the sky, melted into blackness and then disappeared. A river of shadows flowed silently through the empty, sleeping streets. It crossed the city and poured over the walls of a solid, massive building on the outskirts, a building that bore the legend, “Ecole Professionelle.” It was a schoolhouse.

In the courtyard, a window suddenly opened on the ground floor. A yellow block of light slanted to earth, silhouetting the figures of some people standing beside the wall. Instantly, they crowded forward, toward the window. Two men appeared there. One of them said, “Here’s sandwiches and some cokes.”

“What’s happening in there?”

“Well, there hasn’t been a peep out of anybody.”

A soldier appeared beside the two men in the window. “You’ll have to close this window,” he said. “Those were my orders.”

Darkness rushed back into the space where the light had been.

The endless moments passed. Finally the black-out driving lights of an automobile appeared in the driveway of the schoolhouse. Closely behind, came another car. And then, in rapid succession, staff cars pulled up in front of the main entrance and officers entered the building.

The correspondents, still waiting in the courtyard, came closer. They could feel the air of sudden excitement.

At 2:15, Brigadier Gen. Frank Allen, of SHAEF Public Relations, stepped into the correspondents’ press room. His voice was tense, almost strange. He said, “Gentlemen, this looks like IT. Follow me, please, in double file.”

They marched down the hall, up the stairs, and entered the War Room. The photographers were in prearranged positions.

The room was brilliantly lighted, so planned in order to obtain a full photographic record of the event. The walls were covered with Nile green beaverboard. Attached to the beaverboard, were battle maps showing the disposition of forces on all fronts, a “thermometer” set against a Swastika background which had registered the mounting millions of German prisoners taken, and the charts and diagrams of air operations, supply deliveries, and communications systems.

There was also a chart that tabulated Allied casualties.

Down the center of the room ran a long, L-shaped table, with a shiny black top. Thirteen chairs were placed beside it, three on one of the long sides, eight on the opposite side, and two at the end.

Five minutes later, Lieut.-Gen. Walter Bedell Smith, Chief of Staff, strode into the room. Signs of fatigue, small lines of weariness, showed in his face, but his eyes were keen and sharp as ever. He looked over the seating arrangements. Then, unconsciously, his eyes swept over the maps and charts on the wall. They stopped on one of the maps, and a grim, small smile touched the corners of his mouth. The map showed what would have been the next operation.

He then turned toward the door and gave a signal. Somehow, although no word was spoken, you knew that he had ordered the Germans to enter. The silence was stifling in the room. Nobody spoke, and hardly anyone moved. Then the door opened again. The Germans stood there. They were Col. General Justaf Jodl, chief of the Wehrmacht, Gen.-Admiral Hans-Georg Friedeburg, commander of the German Navy, and Major G. S. Wilhelm Oxenius, an aide.

Jodl wore the uniform of a Wehrmacht officer, grey-green, with silver trim. The Knight’s Cross of the Iron Cross was on his breast. His pimply face was stiff, frozen, inscrutable.

Friedeburg looked more relaxed. He was unsmiling, but there was an air of ease, or resignation perhaps, in his face. His blue navy uniform was semi-dress. A row of the highest German decorations glowed above his left breast pocket.

Oxenius seemed merely ill at ease, like a schoolboy confronting the Board of Education. He kept glancing at Jodl and he did whatever Jodl did. The three Germans were shown their three chairs. They stood at attention, facing the Allied officers on the other side. Both groups bowed, and then all sat down.

“There are four copies to be signed.” Gen. Smith’s voice was cold, colorless, matter-of-fact. He spoke without haste. Neither tone nor cadence hinted at his feelings. At the same moment, Major-Gen. K. W. D. Strong, of Supreme Headquarters Intelligence, who had escorted the Germans into the room, placed the documents in front of the Germans, and interpreted. His voice was low but distinct.

There was a moment of silence, and in that moment, the scene seemed to freeze. It had the character of a picture, somehow, a queer unreality. Here was the end of nearly five years of war, of blood and death, of high excitement and fear and great discomfort, of explosions and bullets whining and the wailing of air raid sirens. Here, brought into this room, was the end of all that. Your mind refused to take it in. Hence, this was a dream, this room with the Nile green walls and the charts, the black table, and the uniformed men seated around it. The words, “There are four copies to be signed,” meant nothing unless you forced the meaning to come, ramming it into your brain with a hard, conscious effort.

Gen. Smith was speaking again. He looked straight at Jodl with hard, unwavering eyes. He said these were the documents stipulating formal surrender. He asked them if they were ready to sign. Gen. Strong translated.

Jodl assented with a curt nod. He did not speak.

And then the documents were being passed across to the Germans, and they were signing them. They were signing away the Germany Army and the Luftwaffe and the submarines. Their pens scratched and the State that was to have lasted a thousand years died.

As each was signed, it was passed across the table to the Allied officers, American, British, French and Russian. The signing was over. Suddenly, Jodl rose, pushing back his chair. With a jerky, marionette-like motion he turned toward Gen. Smith. He requested permission to speak. He looked downward at the table, like a man thinking as he spoke:

“General! With this signature, the German people and the German armed forces are delivered, for better or worse, into the victor’s hands. In this war which has lasted more than five years, both have achieved and suffered more than perhaps any other people in the world. In this hour, I can only express the hope that the victor will treat them with generosity.”

The sound of his voice died away. There was no response.

He was not a sympathetic figure. The harshness and iron of the Prussians was marked in every curve of his body and in every unyielding line of his face. Here was the personification of blood and iron. Men like this had loosed the rivers of blood and made the nights hideous with screaming. From the War Room, the Germans were taken down the hall to Gen. Eisenhower’s office.

Eisenhower was standing, waiting, behind his desk. Beside him was a lean, dark-haired man with a long face and a poet’s eyes, Air Chief Marshal Sir Arthur Tedder, Deputy Supreme Commander.

Jodl entered first, then Friedeburg and finally Oxenius. Again there was a moment of heavy silence.

Then Eisenhower spoke. His voice was cold and stern. The steely character came into his blue eyes. In a few, clipped sentences, he asked the men before him if they understood the terms of the surrender. They said they did. He asked if they were prepared to carry out these terms. Another brief assent. They stood, unmoving, for an instant and then, sensing that nothing more would be said, they bowed, stiffly, turned and left the room.

The book World War II: Unforgettable Stories and Photographs by Correspondents of the Associated Press will be released on May 8, 2015. 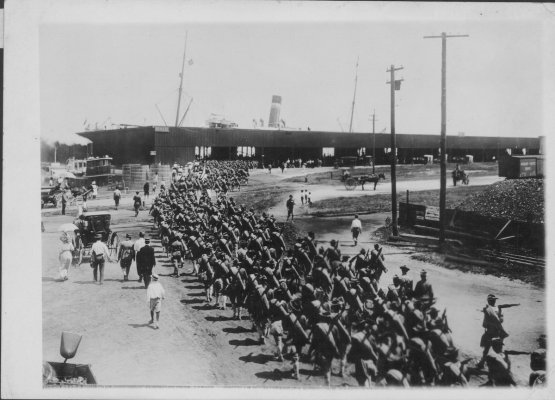 What the U.S. Can Learn From a Century of War
Next Up: Editor's Pick