Who is Marilyn J. Mosby? A Guide to the Baltimore State's Attorney

Marilyn Mosby, Baltimore state's attorney, speaks during a media availability in Baltimore on May 1, 2015.
Alex Brandon—AP
By Josh Sanburn

On Friday, Mosby—elected Baltimore City State’s Attorney last November—announced there was probable cause to charge police with murder in the death of Gray, a black man whose spine was severed after being detained near a West Baltimore housing project on April 12. Gray died a week later.

The 35-year-old attorney now finds herself at the center of an incident that has roiled Baltimore for weeks and renewed the nation’s focus on the intersection between race and policing.

In some ways, Mosby is an unlikely prosecutor to bring charges against police officers in the Gray case. Five generations of her family were all in law enforcement, and her grandfather was one of the first African-American police officers in Massachusetts. “I know that the majority of police officers are really hard-working officers who are risking their lives day in and day out, but those really bad ones who go rogue do a disservice to the officers who are risking their lives and taking time away from their families,” she told Baltimore Magazine in January.

Mosby was raised by a single mother in Boston, where in 1994 her 17-year-old cousin was killed near her home after being mistaken for a drug dealer. She was the first in her family to graduate from college and attended Tuskegee University in Alabama, studying political science. She later attended Boston College Law School and worked as assistant state’s attorney in the Baltimore City State’s Attorney’s office.

She was working as field counsel for Liberty Mutual Insurance when she decided to run for Baltimore’s state’s attorney, campaigning on a pledge to keep repeat offenders off the street and vowing to start a diversion program that would help young drug offenders avoid getting more serious criminal records. Her surprise victory in November over Gregg Bernstein, who had served one term as the city’s state’s attorney, made her the youngest chief prosecutor in a major U.S. city.

In the run-up to Gray’s charges, Mosby had been criticized for her lack of experience having never held elected office before, as well as a potential conflict of interest regarding her husband Nick, who is a city council member representing the neighborhood where Gray was arrested. Mosby has brushed off that criticism, saying that she doesn’t answer to the city council but by the constituents who elected her.

Still, Mosby was under significant pressure to bring about charges against the officers involved in Gray’s death after a series of violent protests that forced Mayor Stephanie Rawlings-Blake to bring in thousands of National Guard troops to keep the peace.

Now that charges have been brought, she’ll face yet more scrutiny — not least from Baltimore’s police union, which accused Mosby Friday of having a conflict of interest in this case due to her “close relationship” with the Gray family attorney. According to the Baltimore Sun, Billy Murphy, the Gray family’s attorney, gave Mosby $5,000 for her campaign and was part of her transition committee.

Back in January, Mosby acknowledged the long-standing problems between residents and the police, hoping she could help bridge that trust gap between residents and police. “There are barriers of distrust within the community and law enforcement,” she told Baltimore Magazine. “And we’ve got to find ways to bring down these barriers. It’s never been more evident than now, right?” 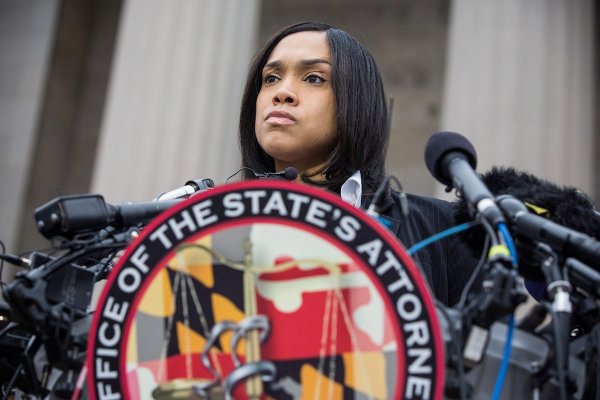 Why Charges in the Freddie Gray Case Came Quickly
Next Up: Editor's Pick