Are Smartphone-Controlled Locks Worth Putting On Your House?

I’m no handyman, and I’m certainly not a locksmith. But as a newish homeowner — and one who delights in tinkering with smart home gear of all stripes — I’ve gotten pretty adept at some things around the house. One of which is changing out locks.

In fact, the first thing I did when the previous owners handed us the keys was toss them in the trash. Then I pulled out a Phillips head screwdriver and installed some Kwikset SmartKey locks, so one key would open all my various entries.

The Kwikset Kevo smart door lock also has SmartKey cylinders (it would be pretty dumb if it didn’t), but the Bluetooth-connected device goes a step further, eliminating keys altogether in favor of smartphone connectivity. I Installed the Kevo and gave it a whirl, and while I was initially excited about the product, in the end, it turned out to be less of a turnkey solution than I would have liked.

I installed the Kevo on my side door, a deliberate choice based on a couple of factors. First, that’s the door I use the most. Second, Kevo makes sounds when used and has a bright LED ring around the keyhole. I didn’t want these obvious signals to broadcast my lock’s status to the sidewalk and beyond. Later, however, I discovered that disabling these indicators is as easy as flipping a switch. I only wish the rest of my experience with this lock went this easily.

While other connected door lock solutions are retrofits that slip on over the existing lock hardware (and admittedly, I have not reviewed them yet), Kwikset Kevo replaces the lock entirely, all the way down to the deadbolt. On one hand, you’d think that would make for a much more sturdy piece of hardware — and where it comes to the actual lock mechanism, it’s as smooth as anything on the market — but the overall casing is bulky, unwieldy, and has to be affixed to the door with a bracket.

In some ways, this is to be expected. But in others, it’s very disappointing. From the outside (other than the glowing LED ring) the lock looks like an everyday deadbolt. But on the interior side, the casing is tall and bulky because it has to accommodate not only the mechanisms to detect a Bluetooth-connected phone (or a fob, for use by those without smartphones) but also a battery pack big enough to hold four AA batteries. But in addition to that, there’s a lot of air in the device’s chassis. And in that air sits two wires. And in those two wires, I discovered one problem.

Typically when reviewing a product, I don’t mention if the device brakes, so long as the manufacturer provides a replacement that works. Gadgets break all the time, and stores exchange the busted products just as affably as publicists do. But Kevo’s problems are the result of a design flaw, in my opinion, and as a result, I have to mention the fact that it took me two Kevos to make this lock work.

The problem begins with the fact that my side door has a nine-panel window, a common fixture for an entrance. This is worth noting because the Kevo’s large footprint on the door’s interior size made the lock extremely difficult to install. In particular, the lock is so wide that it ran into the molding around my window. And the device is constructed such that you have to slide a cover on and off in a very rough fashion to change the battery, pair the lock with new phone, or change the alert settings. The best comparison I can make is that sliding this cover on or off is like opening the battery panel on a children’s toy. With grooves on each side, the cover is designed to slide into place, but it’s not an inviting piece of hardware to open up.

In addition, the bracket that holds the lock hardware and battery casing to the door has a surprising amount of give. So much so that the entire device can swivel five degrees in either direction, even though its installed and working properly. This astounded me for a lock made by Kwikset, though I don’t believe it affected the overall security of the bolt or cylinder.

And finally, the biggest problem has to do with the two wires referenced above. Stretching from the lock’s exterior piece, into the door hole, through the bracket, and connecting to the battery and brain of the device, these wires are more-or-less loose, and installers (consumers, basically) should be very careful around them. Despite the installation instructions showing otherwise, one wire is taped down. I un-taped the wire on the first lock I had (thinking that I should because the instructions don’t show it to be fastened down), and it quickly and easily became detached from the lock’s circuitry. That’s why I had to send it back. The second time around, I was much more careful with this wire, and ultimately successful in installing the Kevo unit.

Once I got Kevo up and running, everything operated without a hitch. The device connected with my iPhone 6 and my wife’s iPhone 5 perfectly. The only complaint that I had was going to be about Kevo’s pay-per-key eKey program, but it turns out I was wrong. A July 2014 update to the app and the lock’s firmware made the feature available to Kevo owners for free — a smart move because competing smart locks were also offering free keys for houseguests.

But I also made sure to physically set up my home’s house key with the SmartKey lock, just in case it managed to fail me sometime. And truth be told, I refuse to leave home without my keys, though arriving home and simply touching the lock with my phone in my pocket was a glorious convenience, especially with a baby in my arms or a leashed dog tugging me in all directions.

Still, something to note is that Kevo will not improve your home’s security. Crooks can still kick in your door, pick your deadbolt, or break your window. Actually they’ll be much less likely to hack your Bluetooth-connected lock than do any of these things, because its simply easier to use brute force than technological know-how to enter into a home. And not to be alarmist, but there’s no lock — connected or otherwise — that’s going to make you safer. These products don’t change the fundamental truth that locks only keep honest people out. 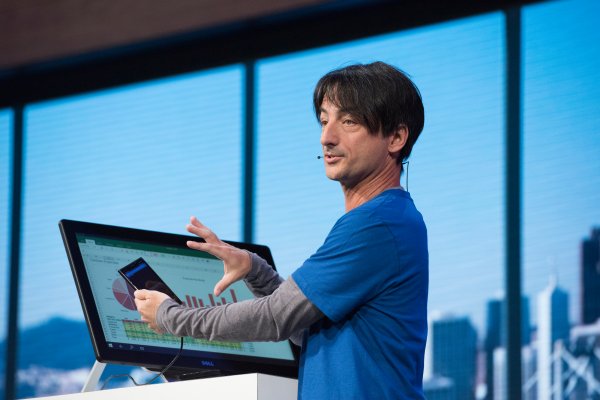 Why Microsoft Thinks Your Phone Could Be Your Only Computer
Next Up: Editor's Pick