Why Rescuers Still Hold Out Hope for Survivors in Nepal's Rubble

Pemba Tamang is carried on a stretcher after being rescued by Nepalese policemen and U.S. rescue workers from a building that collapsed five days ago in Kathmandu, Nepal on April 30, 2015.
Niranjan Shrestha—AP
By Noah Rayman

In the wake of the devastating earthquake that struck Nepal on Saturday, the first 72 hours were the most critical for first responders to reach victims buried under the rubble. After that, experts say, the chances of survival, particularly for those with injuries, become slim.

But human beings have a remarkable capacity for clinging to life even in the direst of circumstances. Proof of that was evident Thursday, five days after the quake, when rescuers pulled a dazed 18-year-old teenager from the rubble in Kathmandu, who was unharmed enough to thank his savior when they first made contact.

“There are always miracles,” Mike Davis, a team leader for the United States Agency for International Development Disaster and Relief Team in Nepal told TIME earlier this week. Past survival stories are as sensational as they are encouraging for rescuers:

In 1995, 19-year-old Park Sung Hyun was pulled from the rubble 16 days after a department store in Seoul collapsed, killing more than 500 others. Except for a scratch, she was uninjured. “I can’t believe that this is for real,” her brother told Yonhap Television at the time.

After the 2013 collapse of a garment factory in Bangladesh—which represented the deadliest non-violence-related building collapse in history—emergency responders saved Reshma Begum after being buried for 17 days. An army seargent at the time said Begum had been breathing through a pipe inside the wreckage and was not seriously injured; Begum, a seamstress who had been working on the factory’s third floor, said she had survived off of biscuits in the bags of dead colleagues and rainwater that managed to reach her.

And in 2005, a 40-year-old woman was found alive in a tiny space in the kitchen of her home in Kashmir, which collapsed in an earthquake more than two months earlier. A doctor treating her afterward called it a miracle that she had survived, apparently off of fresh air and water that reached her and remaining food in the kitchen.

Experts say that survival can depend largely on the moments after the earthquake as structures come crashing down. “The ideal situation is you have become trapped and entombed but have some sort of oxygen supply from the outside world,” Julie Ryan, then a coordinator with the International Rescue Committee, told the BBC in the wake of the 2010 earthquake in Haiti.

Access to water and food are also crucial; the average survival time without water ranges from three to five days. According to the BBC, the United Nations usually calls off search and rescue five to seven days after a disaster. But even when the last survivors are pulled out of the wreckage, the response operations for the impoverished nation will go on.

“Search and rescue is really the first thing,” says Garrett Ingoglia, the vice president for emergency response at AmeriCares, which is sending medical aid to Nepal. “But the recovery effort is going to take years.” 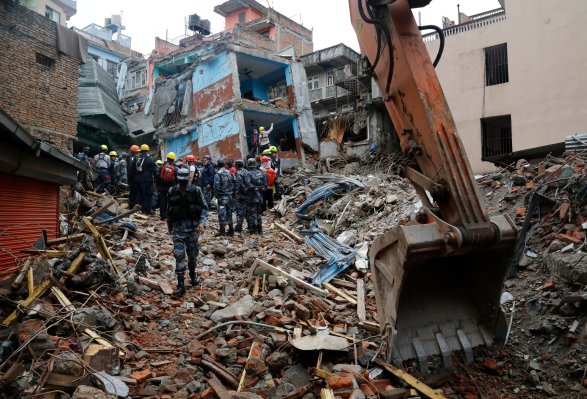 Facebook Raised More Than $10 Million in 2 Days For Nepal
Next Up: Editor's Pick