What Really Happened to Freddie Gray? Here Are 4 Theories

Baltimore Police Commissioner Anthony Batts announced Thursday that an internal task force investigating the fatal injury of Freddie Gray in police custody gave its report to the state’s attorney a day early, while also revealing that a fourth stop was made by the police van carrying the 25-year-old.

The findings, however, won’t be publicly released immediately. What is known so far is that Gray was arrested on April 12 near a West Baltimore housing project and died from a severe spinal injury a week later. On Monday, protests erupted throughout the city, forcing Mayor Stephanie Rawlings-Blake to request a state of emergency, allowing thousands of National Guard troops to enter the city to keep the peace.

But the city is likely to remain on edge until the facts of Gray’s injury are made clear. Marilyn J. Mosby, state’s attorney for Baltimore, cautioned the public Thursday to be patient while the investigation is ongoing. “We ask for the public to remain patient and peaceful and to trust the process of the justice system,” she said.

In the meantime, various theories have emerged in the media and among Baltimore residents. Here are four of them:

On Thursday, the Washington Post reported that a fellow prisoner who was inside the transport van said Gray was “intentionally trying to injure himself” and he could hear Gray “banging against the walls.” The Post cites a police document obtained by the newspaper.

But that account has already been disputed. Local reporter Jayne Miller of WBAL-TV told MSNBC that “the medical evidence does not suggest at all that he was able to injure himself.”

“You can’t bang your head against the van, to injure yourself in a fatal way, without having a bloodier head,” she told MSNBC’s Morning Joe. “There is just no information that would corroborate that.”

Gray was given a “rough ride”

Those who believe Gray was injured while being transported point to a history of so-called “rough rides” by Baltimore police.

Rough rides are unsanctioned techniques that have apparently been used to injure prisoners, according to a variety of lawsuits. Since 2004, two residents — Dondi Johnson and Jeffrey Alston — have been awarded millions of dollars after being paralyzed from a police van ride.

The Baltimore Sun recently reported on Christine Abbott, who is suing the city after a ride which police were “braking really short so that I would slam against the wall, and they were taking really wide, fast turns,” she told the Sun. “I couldn’t brace myself. I was terrified.”

Police have stated that Gray was not buckled in during the ride.

Police injured Gray before he was put in the van

The official Baltimore police report said Gray was detained without the use of force, but new reports suggest that he was injured during the arrest itself.

CNN reports that a relative of one of the officers said that the unnamed officer believes Gray while he was being detained. “He believes that Freddie Gray was injured outside the paddy wagon,” the relative, who also remained anonymous, told CNN.

Video showing Gray being dragged to the police while screaming and appearing limp also suggests some kind of injury during his arrest, though it’s far from clear how serious. Kevin Moore, a bystander who caught part of the incident on video, told the Baltimore Sun that police placed their heels in Gray’s back and “folded him up like a crab.” He said one officer put his knee in Gray’s neck and that Gray was complaining that he couldn’t breathe.

Gray was somehow injured during the van’s four stops

Police had said previously that the van made three stops with Gray inside — and revealed a fourth had been made on Thursday. At the first stop, he was placed in leg irons, according to police. A second stop was made “to deal with Mr. Gray.” A third stop was made to add a second prisoner, during which Gray was found on the floor of the van and was asking for medical assistance, one officer said. What happened during the fourth stop that police revealed on Thursday is, like the circumstances of Gray’s injury, a mystery. 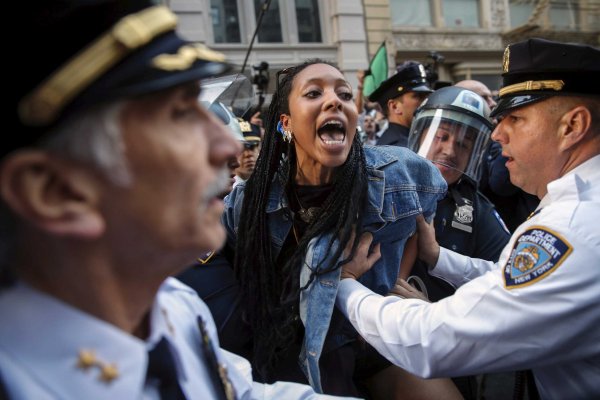 See Freddie Gray Protests Spread Across the Nation
Next Up: Editor's Pick