“You’re singing my song!” Hillary Clinton told students and educators at Kirkwood Community College in Monticello, Iowa, near the end of her first official event of the 2016 presidential campaign. High school students had been talking about how they were getting a leg up, taking college-level courses at the school and getting both high school and college credits for their work. One young woman said she was going to a four-year college next year and would be able to finish in two because of the credits she’d already accrued—thus cutting her college loans in half. A young man headed to Annapolis was getting a head start on the information–tech and engineering courses he’d have to take at the U.S. Naval Academy. Others, less skilled, were starting a vocational path while still in high school, taking courses in auto mechanics and welding that would make them skilled and officially credentialed craftspeople, with plenty of jobs waiting for them. “This is a new vision, a new paradigm!” the candidate exclaimed, referring to the melding of high school and community college. “This is the kind of thing that can get people excited about our educational system again.”

It was perfect Hillary Clinton. She wasn’t faking it. There was no cynicism in the moment. I’ve been watching her hold similar conversations on several continents for nearly 30 years. She’s a wonk; she gets off on programs that work. And it seemed to me that this was a perfect way to launch her campaign, doing something she loved to do—something profoundly unphony—-promoting a program that could really help middle-class Americans. Who could possibly object?

Almost everyone, it turned out. Peggy Noonan in the Wall Street Journal called it “the most inept, phony, shallow, slickily-slick and meaningless launch of a presidential candidacy I have ever seen.” Others were less charming. No one—at least that I saw—talked about the policies she was promoting in Iowa. It was all about the cynicism of the launch, of Hillary Clinton pretending to be one of the people. “You’ve got to be cynical about the Clintons,” said a young journalist I admire.

I was ready to push back against that. I’ve always thought that cynicism is what passes for insight among the mediocre. The Clinton I saw in Iowa was real. Sadly, though, we’ve been reminded in recent weeks that there is another, equally real Clinton. There are several, in fact. There is the Clinton who is cautious to the point of paranoia, who surrounds herself with sketchy sycophants and launches scorched-earth campaigns against anyone who would doubt her. There is the Clinton who adores her husband but—according to the book Game Change—believes she “cannot control” him. It was assumed at the time that she was talking about sex and keeping his occasionally impolitic opinions to himself. As it has played out, the real control issue was about money.

The charges leveled against the Clintons by Peter Schweizer in his book Clinton Cash, and confirmed by a raft of mainstream publications in recent weeks, cannot be dismissed as a right-wing hack attack. They are serious, though probably not criminal. The Clintons are too clever for smoking guns. The bottom line is that the Clinton Global Initiative was used not only to do great works around the world but also to enrich the Clintons. No doubt, there was a lot of self-delusion going on. Let’s take the case of Haiti, reported by Fox News. Bill Clinton was co-chair of a board to give out reconstruction contracts after the 2010 earthquake in that country. Some of the contracts went to Clinton Global Initiative donors, most of which were reputable and competent. A cell-phone contract went to an Irish businessman who had been a CGI donor; he asked Bill Clinton to make four speeches. The Clinton Foundation says several of the speeches were unpaid but acknowledges that contributions were made. No doubt, the lad was chuffed to be in the presence of Bill Clinton; no doubt, he made his contributions to the CGI in recognition of its excellent work. It is entirely possible that both men thought they were doing the Lord’s work. But their relationship also contained a friendly whiff of pay-for-play.

One of the most damning charges, if it turns out to be true—and I’ve not seen it disputed—is that since he left the presidency, Bill Clinton gave 13 speeches for $500,000 or more. He gave 11 of them while Hillary Clinton was Secretary of State. He was, and is, her closest adviser. You would have to assume a high-mindedness that surpasses all understanding to argue that these speeches, and the generosity of their funders, had not even a subliminal impact on the mind of the Secretary. Perhaps the most egregious, confirmed by the New York Times, was sponsored by Russian oligarchs—Schweizer claims some of them had KGB ties—for $500,000 as Clinton Global Initiative donors were selling their uranium-mining company, including U.S. assets, to the Russians. I believe that the Obama Administration’s “reset” with Russia was more than a shell game to enrich the Clintons, but you have to ask: What on earth was Bill Clinton thinking when he took the $500,000 from the friends of Vladimir Putin? What was he thinking when he accepted the “honorary” chancellorship and untold amounts of money from Laureate International Universities, whose affiliate was receiving ever increasing millions of dollars in aid from the State Department while Hillary Clinton was Secretary?

There is more than the appearance of impropriety here. There is the appearance of plutocracy. There is the reality of platinum–level membership in the society of the rich and self-righteous, whose predatory business practices can be forgiven because they “give back” gazillions—call them the egregiously charitable. Bill Clinton has always been a creature of appetites, but he never lived high until he left the presidency. He’s curbed some of the old excesses—-no more McDonald’s; he’s a sleek vegan now—but replaced them with new ones. It is difficult for a poor boy to say no when all these nice, smart, high-minded people are throwing money your way. It’s hard to say no to a private plane. It’s hard to say no when a “friend” invites you to his vacation home, all expenses paid, to rest and relax after all that tough work saving the world. It is very easy to lose touch with real life, with proportion, if you don’t have an acute sense of propriety and boundaries.

In recent days, I’ve spoken with a bunch of Democrats about the Clinton mess. Inevitably, their first reaction is political. The Clintons were “sloppy” but probably didn’t do anything illegal. It’s “good” that this came out early, they argue; it’ll be forgotten by the time the election rolls around. She’s still a lock for the Democratic nomination and probably the presidency, it is said. And how much worse is this than the parade of Republicans crawling to Las Vegas to kiss the ring of the loathsome Sheldon Adelson, in return for $100 million in campaign -contributions—or the Koch brothers’ auditions? Isn’t this what American politics is all about now?

There is a moral distinction, however, between campaign-related moneygrubbing and the appearance of influence peddling. And in practical political terms, while the Clinton Foundation crisis may not prove damaging during the primary campaign, it may come back to haunt Hillary in the general election—just as Bain Capital did Mitt Romney in 2012. True enough, my Democratic interlocutors say, but there’s a lot of real enthusiasm out there for Hillary. She’s historic. She’s smart and moderate and experienced. She’s probably better prepared for the presidency than any of her rivals. Then I ask them: Let’s leave the politics aside; how do you feel about the way the Clintons ran their foundation? “Nauseated,” said one. “Atrocious,” said another. “It’s no surprise,” said a third.

And I suppose that you do have to assume the worst about the Clintons—“to be cynical” about them, as the young reporter told me. How sad. Their behavior nudges up against the precise reason Americans, in both parties, have grown sick of politicians. It’s near impossible for Hillary Clinton to go around saying, with a straight face, much less a sense of outrage, that the “deck is stacked against” everyday Americans when Bill’s partying with the deck stackers. Even if the appearances of impropriety were for good causes, shouldn’t the arrant naiveté of it all disqualify her from the presidency?

Well, maybe not when you look at the Republicans in the race, the anger and myopia that have come to brand their party. Wouldn’t Hillary be better than someone who’d blithely court more wars that can’t be won and shouldn’t be fought? Or someone who would “abolish” the Internal Revenue Service or allow “creation science” to be taught in the schools? That is the tragedy of this situation. Bill and Hillary Clinton have made policy mistakes, but for the most part they have been creative, judicious and sane in office. They are fine public servants. But now—because of their sloppiness and carelessness and tendency to lawyer the truth—the very best-case scenario for Hillary Clinton is that she might be elected President as the lesser of two evils.

Editor’s note: An earlier version of this story, published in error online, incorrectly described the financial dealings between Bill Clinton and an Irish businessman who has been a Clinton Global Initiative donor.

Read next: Veep Creator on Hillary Clinton and the Intense Pressure to Say Nothing 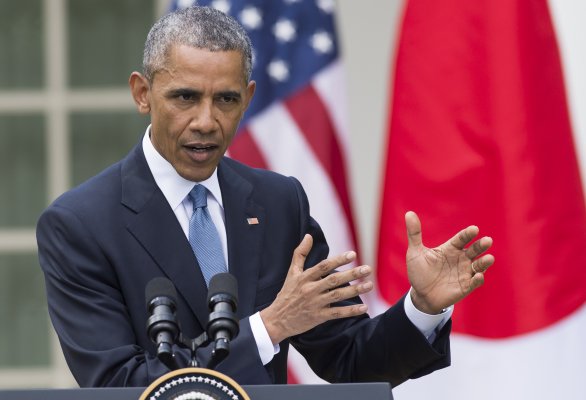 Obama Will Give Low-Income Children Free e-Books
Next Up: Editor's Pick