Tavis Smiley: Protests and Riots Could Become the New Normal

The two seminal pieces of Legislation in the 20th century happened just before the tumult of 1968–the Civil Rights Act in 1964 and the Voting Rights Act in 1965. Fifty years later, we ought to be in a season of celebration. Instead, we find ourselves in an American catastrophe. Trayvon Martin. Eric Garner. Freddie Gray.

On April 4, 1967, Martin Luther King Jr. gave the most controversial speech of his life, “Beyond Vietnam.” A year later to the day, almost to the hour, he was assassinated. In that speech he had pointed out a triple threat facing America: racism, poverty and militarism. In 2015, what are the issues still threatening our democracy? Racism. Poverty. Militarism.

King’s views about how to redeem the soul of America had fallen on deaf ears. The younger generation wanted something more tangible than nonviolence. When Magnificent Montague, one of the most well-known black radio hosts in Los Angeles, used the phrase Burn, baby, burn, that resonated. 1968 was also the year of the Mexico City Olympics, when Tommie Smith and John Carlos held up their fists with the black gloves. The young people were chanting, “Black power!”

Black leaders thought they could contain the rage, helplessness and hopelessness. But they could not stop what was happening on the streets in Newark, N.J., in Detroit. And Barack Obama is not any more able to stop it in 2015 than King was in 1968. The suffering of everyday people gets rendered invisible if they don’t find a way to express it.

Are these riots, or is it an uprising? Semantics. Detroit then was a chocolate city. Baltimore now is a chocolate city. But Detroit had no black power structure. Baltimore today has a black mayor, a black police chief and a black President of the United States. And they are all essentially powerless to stop it.

These riots aren’t a black or white thing–they’re a humanity thing, a dignity thing. When the mayor and the police chief and the President cannot explain to fellow black citizens why Freddie Gray is dead, somebody’s got to be held accountable.

Today, you don’t have the Klan, and you don’t have Emmett Tills or Medgar Everses, but it’s more insidious in that predatory policing is happening under the rule of law.

Sadly, when these incidents happen, we have a sort of fake and fleeting national conversation about police misconduct and race relations. And then we return to business as usual. Until it happens again.

We must find the courage to address what kind of nation we want to be. If we don’t have the courage to do that, then I shudder to think what happens to America in the coming months and years.

Protests and riots–uprisings–could become the new normal. Welcome to the new America. 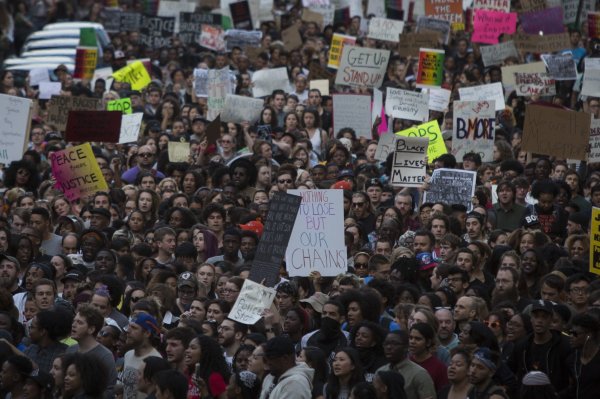 What's Next for Baltimore
Next Up: Editor's Pick