Last weekend I was planting pansies in the front yard with my 8-year-old son when he requested permission to run down to the end of our block and back. We live in a New York City suburb so sleepy that the local police blotter rarely features anything of note, although recently there was an intriguing item about a resident who had been found brandishing a wooden sword. Anyway, I know all my neighbors, and my street is quite safe. There are exactly two houses between mine and the end of our block, and not a lot of traffic. Or, for that matter, rabid dogs, flesh-eating bacteria, zombies or any of the hundreds of other things my imagination would like me to believe will harm my child before bedtime.

Still, I thought for a moment before I said yes, and then walked out to the sidewalk so I could actually track my son’s progress down the hill and back. Am I overprotective? Most definitely, and more on that in a minute. But I also know it’s possible some “concerned citizen” might see the little guy running down the street by himself and call the cops. Just look at the case of Danielle and Alexander Meitiv of Silver Spring, Md., whose decision last month to let their two children (ages 10 and 6) play alone in a local park alarmed a concerned citizen so much that the Meitivs had the police and child protective services–not to mention journalists everywhere–all over their case.

The Meitivs have tangled with concerned citizens/the police/CPS before, and finger waggers believe this seemingly reasonable pair have completely lost their senses in letting their kids range freely around local play equipment and move from point A to point B on their own. I’d actually like to thank the Meitivs, because in reigniting the national conversation on free-range kids, they’ve finally allowed us to stop talking about vaccination objectors, which frankly was getting a little boring. And now that the free-range debate has become so heated, I’m fairly confident someone will eventually brandish a wooden sword. I can’t wait for that part.

Free-range parenting, you’ll remember, was started accidentally by journalist Lenore Skenazy in 2008 when she had the harebrained idea to let her 9-year-old ride the New York City subway alone. And he actually lived! But Skenazy was immediately crowned “America’s Worst Mom” (generously removing the rest of us from the competition), and she launched the blog freerangekids.com. If you ask Skenazy and the Meitivs, my son is in grave danger, but not from swing sets, running to the end of the block or taking the subway.

No, my son is in danger of his overprotective mother really screwing him up for life. Free-rangers are quick to point out that although our society is actually safer than it has ever been (child abductions are incredibly rare, and violent crime has declined nearly 15% in the past decade, according to the FBI), the number of kids suffering from anxiety is skyrocketing. Which means I probably shouldn’t laugh off the conversation I had with my son this morning on the way to school. “Mom,” he announced, “I don’t think I’m going to college.” Me: “Why not?” Him: “Because I haven’t mastered the skill of sleeping without you.” (Note: He means sleeping under the same roof, not in “the family bed.” That is so 2002. Besides, one of my kids is off at college, another sleeps with the air-conditioning on even in the middle of winter, and our two dogs would never agree to participate.)

If I need any more encouragement to cut the apron strings, there is the study that came out last month in the Journal of Marriage and Family that shows the amount of time mothers spend with their children between the ages of 3 and 11 has no impact on how the kids turn out academically, behaviorally or emotionally. (After age 11 things get more complicated, which luckily is a topic for another time.) So now I’m convinced: if I want Junior to shed his anxieties and eventually go to college, I need to stop watching his every move. In fact, now that I know my three sons can be happy straight-A students who remember to chew with their mouths closed without constant vigilance from yours truly–well, I am out of here.

Which is why today I’m announcing a new movement: Free-Range Parents 2.0. My new movement is so free-range, in fact, that we’ve removed kids altogether and replaced them with SoulCycle, Canyon Ranch and shots of tequila. So to my children: I’ve left a copy of my will in the closet. (It’s that place where clothes get hung up on the curvy things people call “hangers.”) And officer: When someone reports my son wandering around the neighborhood? In the immortal words of Joni Mitchell, if you want me I’ll be in the bar. 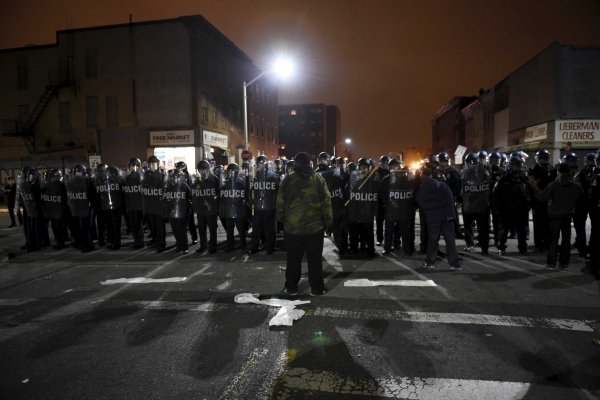 Protests and Riots Could Become the New Normal
Next Up: Editor's Pick