The Roots of Baltimore’s Riot

Baltimore Mayor Stephanie Rawlings-Blake was in church when she heard that Freddie Gray was dead. She says she knew “immediately” that this was something more than the depressingly common passing of another young man in a troubled old city. Black men dying at the hands of police had become “a slow-rolling crisis” in America, as President Obama would put it nine days after Gray’s death. And Freddie Gray was a black man who entered a police van handcuffed and conscious on April 12 and came out less than an hour later comatose, with his spinal cord nearly severed.

The what, the how and the why of Gray’s fatal encounter with Baltimore police remained a mystery more than two weeks after the event. But the mayor could hear that slow-rolling train pulling into her town. And when rioting broke out after Gray’s funeral on April 27–a night of arson, looting and brick throwing that led the mayor to declare a 10 p.m. citywide curfew as Maryland Governor Larry Hogan called out the National Guard–it became clear the train was pulling a lot of baggage cars behind it.

The city that lures visitors with crab cakes and the legacy of Edgar Allan Poe paid out nearly $6 million in settlements to more than 100 victims of police brutality in the four years from 2011 through 2014, according to the Baltimore Sun. Those victims ranged from young teens to a 26-year-old pregnant woman to an 87-year-old grandmother. Gray was not the first person to suffer a disastrous spinal injury in the confines of a Baltimore police van. Jeffrey Alston successfully sued the city in 2004 after a van ride left him paralyzed from the neck down. The family of Dondi Johnson Sr., who died two weeks after sustaining a spinal injury in custody, won a similar suit in 2010. In Baltimore slang, it’s called going for “a rough ride.”

When police violence is so common it has its own patois, a city has a problem. But Baltimore’s problems have been carefully and colorfully documented for years. While tourists enjoy the Baltimore of the Inner Harbor–a growing, high-end, pedestrian-friendly magnet for rising millennials–television viewers are more familiar with the Baltimore of The Wire. That’s a city where the population crested in 1950 and the receding tide of humanity left behind entire neighborhoods of dilapidated row houses and shuttered factories. Here, opportunities are few outside the drug trade, and the police are more feared than trusted. The neighborhood of Sandtown-Winchester, where Gray was arrested, is part of this Baltimore. So is Mondawmin, where the riots began after a confrontation between city police and schoolkids who had gathered in the area. And so is Broadway East, where a $16 million residence under construction for low-income seniors burned down in what the mayor is calling a riot-related case of arson.

Baltimoreans of a certain age know that change is hard, yes, but riots don’t make it any easier. They lived through 1968, when rioting after the assassination of Martin Luther King Jr. left six people dead and 700 injured, and some 1,000 businesses were looted. Almost half a century later, parts of the riot zone have yet to bounce back. “We never really recovered from the riots of 1968,” says city council president Jack Young. “Our infrastructure was destroyed: butcher shops, clothing stores, supermarkets, all destroyed for one reason or another.”

While the city’s population may have stabilized at about 600,000–from a peak of nearly 1 million–Baltimore’s poorest areas are stagnant. There are roughly 16,000 vacant homes throughout the city, many of them in Sandtown-Winchester, where a quarter of the houses sit empty. According to a 2011 report by the Baltimore city health department, the neighborhood is long on liquor stores (double the city average) but short on jobs (the unemployment rate is also double the city average). One in 4 juveniles was arrested at least once from 2005 to 2009. “It’s one of the most disinvested neighborhoods in our city,” says Lawrence Brown, a community activist and professor of health policy at Morgan State University. And Baltimore, for all these reasons, has become America’s latest poster city for racial and economic discontent.

For Nine uncomfortable months we have wrestled in new ways with our centuries-old conversation about race. The roots of these days of rage, whether in Ferguson or North Charleston or Baltimore, reach down through decades of compounded failures. Each flash point is different; so was each community’s response. But there is something universal about them all. As Obama noted, during remarks in the Rose Garden that ranged from determined to despairing, “I think we, as a country, have to do some soul-searching. This is not new. It’s been going on for decades. And without making any excuses for criminal activities that take place in these communities,” he continued, in Baltimore and elsewhere “you have impoverished communities that have been stripped away of opportunity, where children are born into abject poverty.” The parents, “often, because of substance-abuse problems or incarceration or lack of education themselves, can’t do right by their kids.”

The President was frustrated that attention to this tangle of problems is so sporadic, with satellite trucks and blue-ribbon panels dispatched only “when a CVS burns … when a young man gets shot or has his spine snapped.” But Baltimore is as good a place as any to learn just how complicated and change-resistant these problems can be.

Endless rounds of school reforms have produced results–but slowly. The graduation rate is rising but still remains substantially lower than the statewide average. The number of students taking AP exams rose 9% last year, but city students pass them at less than half the rate of their peers outside the city. Crime rates have fallen sharply over the past two decades, mirroring a national trend–yet they remain significantly higher than in most U.S. cities.

Baltimore’s troubles persist despite the rise of a generation of black leaders and a highly diverse corps of public employees. The mayor, the schools’ CEO and the police chief are all African Americans, and 48% of the police force is black. Indeed, Baltimore has always produced strong black figures, from the religious leader Mary Elizabeth Lange to Supreme Court Justice Thurgood Marshall (who once lived in the neighborhood where Freddie Gray died).

But it turns out that diversity at the top and integration of the middle class are challenges of a different order than the crisis of the left behind. Those African American police officers are not likely to live in Baltimore’s most troubled neighborhoods, and when Mayor Rawlings-Blake initially characterized the rioters in her city, she chose a word–thugs–that seemed to distance her from the deeper problem.

This isn’t to say that race has no part in the toxic tangle. Joseph Capista, a lecturer at Towson University who helped organize demonstrations outside Gray’s wake on Sunday, says he has lived in several neighborhoods around Baltimore. Policing in more-affluent white neighborhoods, he says, is almost always more respectful than in poorer black ones. “We live in an antebellum society in terms of racial justice,” he says.

Police Commissioner Anthony Batts, who came to the city after leading police departments in Oakland and Long Beach, Calif., has used similar language. “When I came to Baltimore, it was like going back in time,” Batts said in an interview earlier this year. Parts of the city, predominantly white, are full of “old money … very affluent, very beautiful.” Those stand apart from the “areas that are very challenged.” This sharp segregation is the lens through which Baltimore sees its problems. “It’s about black and white racism in that city. It’s all the things you dealt with in the 1960s,” Batts said.

The city passed a tense but mostly peaceful night after the rampage of April 27, but officials were taking no chances. School was canceled, and after postponing two games, the Orioles played inside a shuttered Camden Yards on April 29–the first time a Major League Baseball game has ever been closed to the public. Somehow, given all that is true of Baltimore and all that has fed the nation’s slow-rolling crisis, it seemed too much to hope that the worst might be over.

But if the peace holds in Baltimore, it will not be because of outside intervention. Rather, the solution will have come from within. For every rioter, the city’s neighborhoods produced more men willing to lock arms to form a buffer between demonstrators and police, more teenagers willing to sweep sidewalks clean of broken glass. In one indelible image, a mother took her rampant son by the ear and hauled him home. When police cited reports that gangs were threatening to kill cops, members of the rival Crips and Bloods answered by calling for peace. “We don’t want nobody to get hurt,” a self-professed gang member told a reporter for the Sun.

The men and women who leaped to defend and repair their neighborhoods are the agents of hope that Baltimore so desperately needs, and theirs is the energy that might be harnessed to meet the daunting challenge of what comes next. Obama was right when he said “there are police departments that have to do some soul-searching,” and Baltimore’s is obviously high on the list. But as he went on to say, our communities–and the whole nation–have soul-searching to do as well. We might start by noticing not just what went wrong in Baltimore but also what went right. 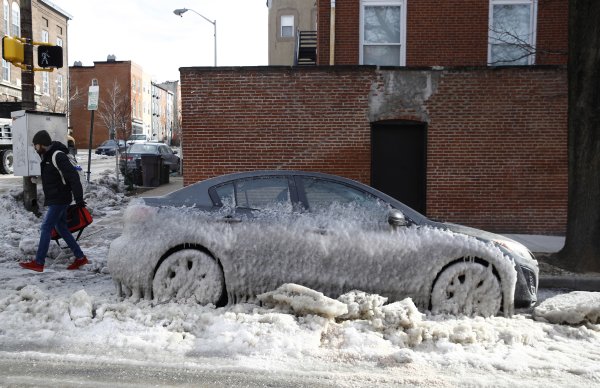 'This Is Unacceptable.' Baltimore Students Forced to Bundle Up in Frigid Classrooms
Next Up: Editor's Pick