The Eerie Links Between the Lusitania and the Titanic

When the Lusitania went down, three years after the sinking of the Titanic, the similarities were hard to overlook. Both British ocean liners had been the largest ships in the world when first launched (the Lusitania at 787 feet in 1906, and the Titanic at 883 feet in 1911). And both were ostentatiously luxurious, designed to ferry the world’s wealthiest passengers between Europe and the United States in comfort and elegance.

The difference, of course, was what sunk them: an iceberg for the Titanic on her maiden voyage in 1912, and a German torpedo for the Lusitania on this day, May 7, 100 years ago.

Just before the Lusitania left New York, bound for Liverpool, German officials posted notices in American newspapers warning that any ship under British flag, including merchant vessels and passenger liners, could be targeted as the war between the nations intensified. But not everyone believed the German Navy would follow through on the threat. Notable doubters included Winston Churchill and the Lusitania’s captain, W. T. Turner, who told a reporter, “It’s the best joke I’ve heard in many days, this talk of torpedoing.”

Also among the doubters were the 128 American passengers who died along with more than 1,000 others when the Lusitania sank — compared to roughly 1,500 people lost on the Titanic.

The lists of the dead from both vessels might have been ripped from the society pages. Among those who died on the Titanic were Benjamin Guggenheim, heir to his family’s vast mining fortune; Isidor Straus, co-owner of Macy’s; and John Jacob Astor IV, widely reported to be the richest man in the world.

Lost on the Lusitania were famed Broadway producer Charles Frohman, fashion designer Carrie Kennedy, and millionaire sportsman Alfred Gwynne Vanderbilt, who was on his way to England to lead the annual meeting of the International Horse Breeders’ Association.

The small world of the immensely wealthy created a number of eerie connections between the two doomed ships. Vanderbilt, for example, had been booked on the Titanic three years earlier but didn’t sail. Lady Duff-Gordon, one of the most famous Titanic survivors, had a ticket for the Lusitania but canceled at the last minute for health reasons, per Smithsonian.com.

Despite their similarities, however, the two ships were a sociological study of contrasts in the human response to imminent disaster. On the Titanic, women and children — and the very wealthy — were more likely to be saved during an ordered evacuation effort that followed the social rules of the day. On the Lusitania, according to TIME, chaos reigned and the fittest survived, winning the race to lifeboats and flotation devices.

Partly, the difference had to do with the time it took the two ships to sink. Titanic passengers had a leisurely 2 hours and 40 minutes to sort out a system, while the Lusitania went down in only 18 minutes, meaning there was little time to advance beyond a fight-or-flight response.

Furthermore, everyone aboard the Lusitania was keenly aware of how things had turned out on the Titanic three years earlier. They were, therefore, “disabused of the idea that there was any such thing as a ship that was too grand to sink — their own included,” as TIME reports.

Read more about how the sinking of the Lusitania is part of the story of World War I, here in the TIME archives: Insane Years 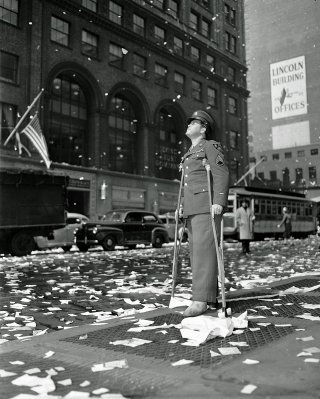 Read an Eyewitness Account of the German Surrender in World War II
Next Up: Editor's Pick