America met Brad Garrett as Ray’s goofy brother Robert on Everybody Loves Raymond. Robert may have been bumbling, but he was rarely offensive. Garrett’s stand-up, however, can be a little saucier (and smarter). His new book of personal essays, When the Balls Drop: How I Learned to Get Real and Embrace Life’s Second Half, recounts some moments that left some high-profile comedy targets less than laughter-filled.

When Garrett was still getting started, he got a last-minute call from Cosby, who was guest-hosting Johnny Carson’s The Tonight Show. He agreed to do a spot on the show, and the two took a jet together from Las Vegas. En route, Cosby asked the younger comedian about his act.

But they were just hours away from taping, and Garrett had no other material that he hadn’t used on Tonight Show spots before. So he did his Cosby impression anyway, knowing it would kill (it did).

Garrett frequently opened for Sammy Davis, Jr., which is how he met Frank Sinatra’s people. They booked Garrett to open for Ol’ Blue Eyes on New Year’s Eve 1989, and Garrett was ecstatic. That is, until Sinatra saw him backstage and asked his guys, “Where’s Dreesen?” Tom Dreesen was his regular opener, but he was booked for Glen Campbell that night. “No one told me,” Sinatra said. “Why the hell would you hire someone to open who I’ve never seen before? And on New Year’s Eve?”

Garrett was already sweating when he went onstage, but the act went relatively well. Sinatra booked him again one month later in Atlantic City, where Garrett faced a tough crowd (more about that later). His parting words to the audience were, “You’ve been very … lifelike. Thank you. And stick around for Frank!”

This set off alarm bells for Sinatra. His close friend Jilly Rizzo went backstage after the show and confronted Garrett in his dressing room.

All was forgiven in the end, and the group went out for Chinese food.

Perhaps the most dangerous enemy Garrett made was an audience member at his Atlantic City gig for Sinatra. He noticed some people weren’t even paying attention to his jokes:

Garrett got an explanation after the show: “Turns out ‘Mr. Peanut’ was John Gotti. Apparently, I have nine lives.”

When the Balls Drop hits shelves on Tuesday. 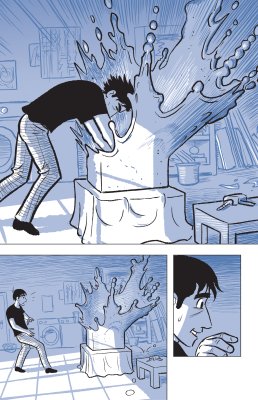 Scott McCloud: Girls Are Taking the Comic Book World By Storm
Next Up: Editor's Pick