Former French first lady Valerie Trierweiler attends a gathering "Bring Back Our Girls" near the Eiffel Tower in Paris on April 14, 2015 to mark one year since more than 200 schoolgirls were kidnapped in Chibok, north-eastern Nigeria, by Nigerian Islamist rebel group Boko Haram.
Gonzalo Fuentes—Reuters
By Aryn Baker

When a Nigerian military spokesman claimed on Tuesday to have rescued some 200 women and girls held captive by members of the Boko Haram, hopes soared that they might be the schoolgirls kidnapped a year ago from a dormitory that put the name of their small town, Chibok, in the global spotlight.

The kidnapping, which took place on April 14, 2014, spurred an international twitter campaign to #BringBackOurGirls, and saw a dedicated band of Nigerian mothers, students, activists and civil society members holding daily vigils in the capital, Abuja, and weekly protests elsewhere in the country.

More than 2,000 women and children from Northeastern Nigeria have been kidnapped by Boko Haram in the past 17 months, but the plight of the schoolgirls, who were kidnapped in one raid and seemed to have been targeted because they were seeking education, garnered the world’s sympathy. The founder of the Bring Back our Girls movement, former World Bank Vice President for Africa and former Nigerian Education Minister Obiageli Ezekwesili was relentless in her campaign to make sure the Chibok girls were not forgotten, and brought in international celebrities from Madonna to U.S. First Lady Michelle Obama and Nobel Peace Prize laureate Malala Yousufzai to promote the cause.

So fervent is the desire to see the girls back and alive, the disappointment that the 200 rescued women were not from Chibok was profound. “Alas it certainly seems they are not Chibok Girls and that is profoundly heart breaking,” Ezekwesili wrote TIME in an email. “Yet, that these girls and women who were also captives of those savages (for God knows how long) can now breathe the air of freedom is certainly victory.”

When the girls were first kidnapped, it took nearly two weeks for the government of President Goodluck Jonathan to respond, and even longer to launch a military effort to take on Boko Haram and track down the students. When the Nigerian military attacked the group, they were often defeated. In many cases soldiers simply abandoned their posts, largely due to inadequate weapons and fears that they would not receive additional air support if they did decide to engage. The failure of a hollowed-out military that had once been the pride of Nigeria and one of the most respected forces in Africa prompted national soul-searching, and may have lead, in part, to the electoral defeat of Jonathan in elections last month. While military spokesmen have claimed credit for the rescue and a spate of military defeats that forced Boko Haram into taking refuge in the dense Sambisa forest, the gains could not have been achieved without the support of an international coalition made up of militaries from neighbors Chad, Cameroon and Niger.

The incoming president, Muhammadu Buhari, has pledged to rebuild the army, but it will take years to recover from a decade of neglect and endemic corruption.

Despite the hopes and efforts of activists like Ezekwesili, the likelihood of finding all the Chibok girls is slim. In several videos posted to YouTube, Boko Haram founder Abubakar Shekau boasted that the girls, many of whom were Christian, had either converted to Islam and been married off, or refused to convert and sold as slaves. According to Amnesty International, Boko Haram fighters, fleeing the advancing Nigerian army, have in some instances slaughtered their own wives rather than let them be captured by “infidels,” a fate that could have befallen some of the Chibok girls. Amnesty also suggests that others might have perished due to the rigors of captivity, and, if the fate of several other Boko Haram escapees is a guide, they might have been used as sex slaves or forced to fight.

Boko Haram has also used young women in suicide attacks, though it is not clear that any of the bombers came from Chibok. Nonetheless, the efforts to rescue the Chibok girls, and all other Boko Haram abductees must continue, says Ezekwesili. The rescue of the 200 girls on Tuesday makes it clear. “We can seize on their rescue to add more pressure on our Government to SPARE NO EFFORT in finding our #ChibokGirls and all other abductees.”

As for the Chibok girls, it is yet another reminder that the world is unlikely to forget them, and the fact that neither the Nigerian military, nor an international Twitter campaign, has been able to find them. 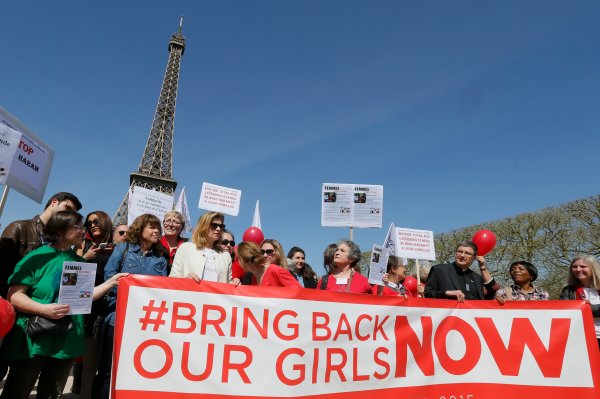 Girls Freed From Boko Haram Camps Not Chibok Schoolgirls
Next Up: Editor's Pick