Some minutes after the stroke of midnight on Wednesday, eight men walked to the execution ground on the Indonesian island of Nusakambangan. The prisoners, who belonged to different faiths, all chose not to be blindfolded and reportedly sang the Christian hymn “Amazing Grace” until the executioners’ bullets were fired, killing them.

Pastor Karina de Vega, who was with the condemned drug convicts until the last moment, told the Sydney Morning Herald, “They bonded together. Brotherhood.”

The world had joined together in pleading to Indonesian President Joko “Jokowi” Widodo, who vows not to grant clemency to drug convicts on death row, to spare the prisoners’ lives. Their pleas fell onto deaf ears: the Australians Andrew Chan and Myuran Sukumaran, the Bali Nine pair who had outwardly repented during the decade they spent at a Bali prison; the four Nigerians who included the so-called Death-Row Gospel Singer; one poor Indonesian laborer; and one mentally ill Brazilian died at around 12:25 a.m. local time on Wednesday. Some of them still had ongoing legal appeals.

Jokowi decided to spare the life of the ninth drug convict, however. At literally the last minute, as Mary Jane Veloso, a Filipina migrant worker, was walking out from her cell to the execution ground, she was told she was granted a temporary reprieve.

The delay came after a woman who allegedly recruited Veloso surrendered to the Philippine authorities on Tuesday afternoon. (Veloso maintains she was a victim of human trafficking and duped into carrying 2.6 kg of heroin into Indonesia.) Philippine President Benigno Aquino III, who had met Jokowi on the sidelines of the ASEAN Summit in Kuala Lumpur on Monday, made another appeal to his Indonesian counterpart to spare the 30-year-old Filipina the next day, saying she could be a key witness in prosecuting drug syndicates.

Manila’s diplomatic pressures aside, Indonesian migrant activists and women’s-rights activists also played a big role in actively lobbying on behalf of Veloso and helped spark a social-media campaign in Indonesia. The National Commission on Violence Against Women says Veloso was a victim of domestic abuse who, driven by poverty, went to work as a helper in Dubai to support her two sons, but returned home after she was nearly raped by her employer. Driven by desperation, she accepted a job offer in Kuala Lumpur, which led to her arrest in Yogyakarta in 2010. It’s a story that resonates in Indonesia, where millions of women seek work abroad as domestic helpers to support their families, frequently falling victim to ill treatment, exploitation and abuse.

Erwiana Sulistyaningsih, a former Indonesian helper whose severe abuse in the hands of her Hong Kong employer made international headlines, called Veloso a “friend” and, just hours before the scheduled execution, joined other Indonesian citizens in pleading to Jokowi to save Veloso’s life. Sringatin, a migrant worker and activist in Hong Kong, took part in rallies in Jakarta; her fellow worker-activist Eni Lestari led protests in front of the Indonesian consulate general in Hong Kong. Two female legislators from Jokowi’s party, Eva Sundari and Rieke Diah Pitaloka, also voiced their support to the Filipina prisoner.

Anis Hidayah, executive director of Jakarta-based Migrant Care, is among workers’-rights activists who have been campaigning for Veloso. When she attended Jokowi’s emergency meeting to discuss Veloso’s case on Tuesday afternoon, she tells TIME, “I told the President that [Indonesian] migrant workers on death row overseas are in the same position like Mary Jane, they are all victims. As I spoke, I couldn’t help crying.”

Six million Indonesian migrant workers remitted $8.55 billion to their families last year — a record high — according to the World Bank (in contrast, the Philippines’ 12 million workers remitted $28.4 billion back home last year, the biggest in Southeast Asia). But there’s a grim fact: there are hundreds of Indonesians currently on death row overseas (the Indonesian government says there are 229, but Migrant Care puts the number at 290). Jokowi has vowed to fight for their lives, despite his hard-line approach to drug convicts on death row back home.

The latest executions “will have a big impact,” says Anis, whose organization opposes the death penalty. “It will create an obstacle and narrow down the Indonesian government’s room for diplomacy to free migrant workers from death row overseas.”

It isn’t clear yet what will happen to Veloso: if her alleged recruiter is found guilty, whether she would have a new trial. On Wednesday, Jokowi said Veloso’s execution “is only delayed, not canceled.” But Anis vows that migrant-workers’-rights groups from Indonesia and the Philippines will keep on fighting for Veloso.

And, after all the controversy surrounding the latest round of executions, the activist says, “I hope it can be a valuable lesson for the law enforcement that death-penalty decisions should not be made carelessly.” 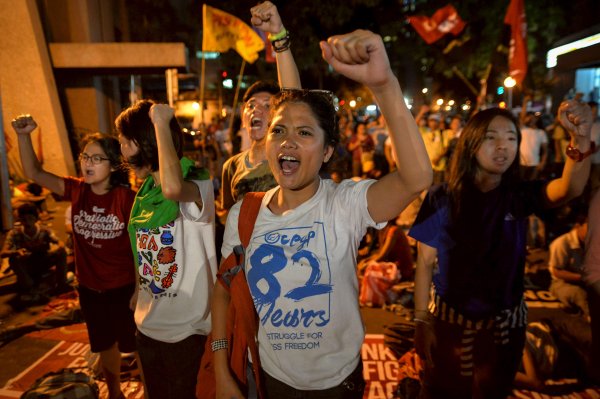 Relief as Indonesia Spares Life of Mary Jane Veloso
Next Up: Editor's Pick