Barely 24 hours after the city she leads was engulfed in a spasm of violent riots, Baltimore Mayor Stephanie Rawlings-Blake defended her handling of the crisis in an interview with TIME.

“I’m not green to these types of issues. I’ve been mayor for five years. I’ve led a city. And directed a police department. I know how to use resources. We’ve done it and we responded to protests,” she said Tuesday evening, hours before police began enforcing the first night of a week-long 10 p.m. to 5 a.m. curfew. “I’m comfortable with how we’ve responded in very, very challenging times.”

MORE: Baltimore Mom Explains Why She Smacked Son at Riot

As Rawlings-Blake spoke inside City Hall, some of the 2,000 National Guard troops mobilized by Maryland Governor Larry Hogan were stationed outside the building. Hogan deployed the soldiers Monday night after rioting broke out following the funeral of Freddie Gray, 25, who died on April 19 after sustaining an injury in police custody. But Hogan made clear that he was ready to do so earlier had the mayor requested, and implied that Rawlings-Blake was unreachable during a critical stretch as the riots were escalating. The remarks were among a series of incidences that highlighted the frosty relationship between the Republican governor and the Democratic mayor.

Rawlings-Blake fired back at Hogan on Tuesday. The governor “didn’t have a full understanding of all things that were being put in place,” she told TIME. “When we are in the midst of dealing with an issue, you have to be very judicious about the use of the National Guard. They’re viewed by the community as a sign of militarization. They’re viewed by many as a sign of escalation of an incident.”

Rawlings-Blake said she asked Hogan to activate the Guard only when the situation was more than city police and their reinforcements from other neighboring agencies could handle. “When it was very clear that the situation was changing and changing fast and we needed people that had the authority to hold ground while we went into do the enforcement,” she said, “that’s when we called them.”

Read next: The Pain of Watching Baltimore Burn—Again

Most Popular on TIME
1
The Disastrous Swedish Approach to Fighting COVID-19
2
What's Your Risk Tolerance for COVID-19?
3
50 Cent Says Donald Trump's Campaign Offered Him $500,000 to Help Appeal to Black Voters 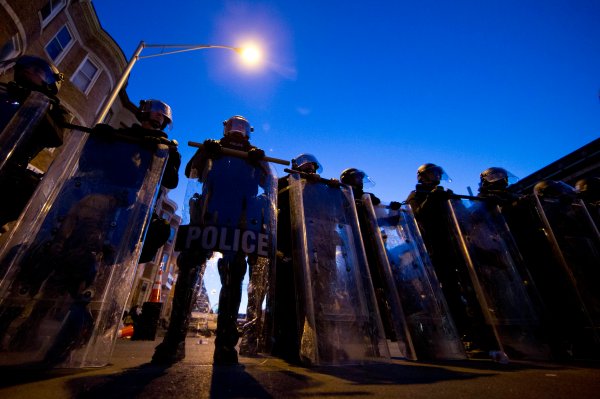 Baltimore Picks Up Pieces
Next Up: Editor's Pick